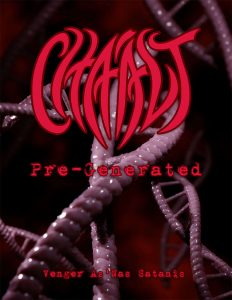 This pdf clocks in at 13 pages, 1 page front cover, 1 page editorial, leaving us with 11 pages of content, so let’s take a look!

This review was moved up in my reviewing queue at the request of my patreon supporters, and to supplement the review of the Cha’alt tome, which’ll hit sites soon.

So, first thing you need to know – these pregens work not only for Cha’alt, but also for other games using the Crimson Dragon Slayer D20-rules; there are 27 such pregens provided, and all are made for first level. Some background information does tie the characters to specific locations in Cha’alt.

The pregens state the class-dependent HP, the name, race, class and alignment. As a minor nitpick: The class refers to “Sorcerer”, when Crimson Dragon Slayer D20 called the class “Wizard.” The more detailed paragraphs for each pregen notes something “Noteworthy”, which may be speaking in infernal tongues, never forgetting a face or the like. There are also races beyond the standard mentioned in Crimson Dragon Slayer D20 (no surprise there, since Cha’alt sports a TON of weird elven races!), including lesser demons, which are immune to heat, fire and poison, but take double damage from cold attacks and need to consume blood and flesh for nourishment. The pdf also features classes like barbarian (12 HP) and Monk (6 HP) – these are kinda problematic, in that they include rules for these “classes” in the pregens – that’s not per se bad, but I think the like should be in the rules-pdf, and balanced versus those.

It should also be noted that the monk-class makes use of Cha’alt’s basic psionics engine (pg 50 of said book); without this engine, you’ll need to do some handwaving there. There is also e.g. an assassin pregen, who gets a fighter’s class level bonus to atk and damage AND a thief’s backstab (which has still not been properly codified). Sure, the assassin only gets 6 HP/level, but yeah – these rules should imho be in the rules-pdf, not in the pregen.

The second thing that the pdf includes in slightly more detail, would be the character’s belongings – these are generally sufficiently varied, but I did notice an instant of a thief sans thieves’ tools and a cleric sans holy symbol – two basic components of gear that the other characters of the classes do have.

The pdf then presents rules for divine favor: One point of divine favor may be gained per session, up to a maximum of 3. This replaces the default Inspiration-rules, and the pdf states how you gain these points by alignment. The agencies of Cha’alt’s old gods (and new gods) are explained – the old gods adhere to Crowley’s famous axiom “Do what thou wilt shall be the whole of the Law.” – these individuals seek to become deities, while the new gods attempt to return and form a unio mystica with the omnipotence of the universe – somewhat akin to how many New Age shamanism-like beliefs champion a mystic union and death of the “I”. Essentially a question of fierce individualism vs. fierce collectivism – I think this is an interesting angle.

Editing and formatting are very good on a formal level, good on as rules-language level. Layout adheres to a two-column full-color standard, and the pdf presents pregen-stats in card-like form; print a page, cut it up, viola, several pregens to hand out. As for artworks, we get aesthetically-pleasing cosplay photos of both females and males, as well as a one-page, pretty nightmarish demon-thing. The pdf has no bookmarks, which is a minor comfort-detriment, but okay at this length.

I like Venger As’Nas Satanis’ pregens, and they’re FREE, which definitely adds to their appeal. Personally, I think that the primary shortcoming here is, that it jams class information that should be in the core pdf instead right into the pregens. These classes can also be significantly better than the Crimson Dragon Slayer D20 core classes: Barbarians can e.g. rage class level times per day, doubling damage and hit points until the combat ends. This makes no sense, since “combat ends” is not a viable time metric – beat a goblin to pulp in a minute? Rage ends. Fight for 2 hours against endless demonic legions? Rage ends. Same resource-expenditure. Per-encounter mechanics make no sense in game without being grounded in time. The barbarian’s downside is that they need to save to use magic or tech, or be unable to do so “until the next scene.” You get the idea. The new classes need some finetuning to bring either their rules-language, or their power-level in line with the core classes.

Oh, and the divine favor rules? They should be in the Crimson Dragon Slayer D20 pdf, not herein!

As a whole, I’d consider this to be a solid, if not perfect example of a pregen book, mainly because it jams material into the file that simply doesn’t belong here. While this would usually make me settle for rounding down, my final verdict will instead round up due to this being FREE, resulting in a verdict of 3.5 stars, rounded up.

You can get these pregens for FREE here.

Missed Cha’alt? You can check it out here.