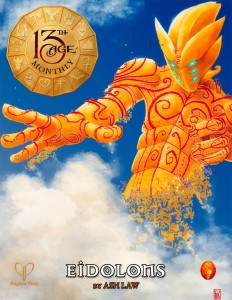 This installment of 13th Age Monthly clocks in at 8 pages, 1 page front cover, 1 page editorial/SRD, leaving us with 6 pages of content, so let’s take a look!

By a route obscure and lonely,

Haunted by ill angels only,

where an eidolon, named night,

on a black throne reigns upright,

I have reached these lands but newly

From an ultimate dim Thule

From a wild weird clime that lieth, sublime,

Out of space – out of time.

Sorry, I couldn’t help myself. It’s my immediate association whenever I hear the word “eidolon” – and no, in 13th Age, they are not the customizable pets of summoners. Instead, eidolons are pretty much powerful spirits shaped by a central core reality and governing principle – they basically are single-minded agents of a concept or ideology given form. Their origins are shrouded in mystery and their devotion to the core-concept that constitutes their reality may put them at odds with one another or make them unreliable allies of the PCs – in any way, these creatures of soul-stuff (classified as the new type: spirit) and weirdness do sport a vast plethora of forms, something represented in their unique abilities:

They can switch initiatives, split parties between realities and even reposition targets…and worse: They are undying. They can be defeated, but you don’t kill an idea. Need something even cooler? What about the concise and rather lethal, optional insanity point-mechanic introduced here? (Yes, including the traditional “You know things you weren’t supposed to…”-knowledge to be gained from insanity…) Different base forms for the eidolons are provided – a total of 4 such forms are fully statted here, with all of them sporting at least one interesting ability.

The opinions of 5 icons (Why not all 13? What about the Occultist?) on the creatures are also provided…and perhaps, you can wrestle the true name of an eidolon out of one of them to gain some control over them…but then again, they may exist to test the mettle of heroes – thus, 3 sample blessings and even more curses to be uttered by these creatures can be found here. Need even more inspiration? What about half a page of adventure hooks? That’s my one gripe – why not make the final page full of hooks? As provided, half a page of blank space at the end looks a bit lost.

Editing and formatting are top-notch, I noticed no glitches. Layout adheres to 13th Age’s 2-column full-color standard and the pdf comes fully bookmarked. The full-color artworks are neat.

ASH LAW’s eidolons are a damn cool, interesting creature type – with narrative potential galore, utterly unique tactical options and a broad diversity of applications, they are pretty much a textbook definition of a great critter – and that is before the fluff, the optional madness rules and the neat blessings and curses. When all I can complain about amounts to “half a page is blank, you could have written something there,” you know that a given pdf is pretty much awesome. That being said, the eidolons very much feel, at least to me, like they ought to have a tie-in with the Occultist and I couldn’t help but feel that opinions of all 13 icons on them would have felt more comprehensive than just covering 5. These two missed chances remain my only valid complaints here – hence, my final verdict will clock in at 4.5 stars, rounded up to 5 for the purpose of this platform.

You can get this cool installment of 13th Age Monthly here on OBS!