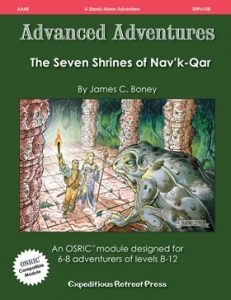 This adventure clocks in at 13 pages, 1 page front/back cover, 1 page editorial/ToC, 1 page advertisement, 1 page SRD, leaving us with 9 pages of content, so let’s take a look!

Now, as always for the series, the default rules employed within are OSRIC, and similarly, it’s easy to convert this to your preferred old-school gaming system. As always for the series, we have some formatting deviations from the standard. The module sports functional b/w-artworks, but these come without a player-friendly version.

As far as supplemental material is concerned, the pdf comes with two different magic items, one of which, oddly has lower XP values than the other, in spite of being worth more GP – some might object to that, though I did not mind.

The book also comes with new monsters: A generic tentacle thing, and a 12-feet tall stone beast with a horn can knock back/stun targets. Both left me unimpressed. Worse: A whole page is devoted to umbra smoke beasts. 8 boring shadow-smoke-y monsters that look like, for example, spiders. Or draconic creatures. Yay. Worse here: Their rules suck: “An arachnid can inflict its opponent with a venom that will cause the victim to slowly fade into shadow.” Okay. Rules? There are none. Save? No idea. That’s not the only error in these beasts on the page – and the sucky smoke beasts take up a whole page of an already brief adventure. Also weird: The eye-picking raptor RAW plucks out an eye with every attack…or it targets the throat. Effects of being struck on the throat? No idea. This is the most potent of these beasts regarding its effects, and it grants the least XP. The monster-section is a failure and uncharacteristically weak for both series and author.

As always, a well-rounded party is very much required. The pdf does note what can be gleaned via legend lore, and 10 rumors are provided. The pdf does note random encounters outside the dungeon, which includes three special ones with slightly more details. These are unspectacular, though. Cool: The pdf does note a variety of strange and haunt-like effects that can be used by the GM to retain the creepy atmosphere of the dungeon. Nominally, this module is for characters level 8 – 12, but considering how deadly it is, I consider 12 to be closer to what you probably want.

Now, in order to discuss the two-level dungeon contained herein, I need to get into SPOILERS. Potential players should jump ahead to the conclusion.

All right, only GMs around? Great, so Nav’k-Qar is basically a Tsathoggua-style Frog Demon God-stand-in who has fallen into obscurity; if you’re a fan of Frog God Games’ Lost Lands, integrating this module should not provide issues – make Nav’k-Qar a lieutenant etc. and be done with it. The dungeon’s floors are littered with a vast amount of toad bones, making navigation of the complex tricky –being required to “move quickly” means 40% chance of falling, -5% per Dex above 13. I *assume* that “moving quickly” means moving more than half movement rate, but this could have been more precise.

The first room is probably one of the best in the whole dungeon, with strange mists and mirrors establishing a really cool theme of deception, one that the dungeon, alas, fails to maintain. While the first level does branch and sports a really deadly false stairs deathtrap (which may seal in all PCs…), a lying golem, almost-instant-death crossbow-bolt trap (that fails to specify whether it requires an attack or save)…the traps are pretty deadly and generally interesting, but ultimately make the module feel basically like a convention-style meat-grinder. Compared to James C. Boney’s usual adventures, these traps feel less refined.

The module, alas, takes a further nosedive on the second level. We get 3 antechambers; from each antechamber, two of the eponymous 7 shrines can be accessed. The PCs will have to visit both shrines accessible to progress to the next antechamber. No means to bypass them, no rewards for smart players. The PCs have to “defeat” the shrine. What constitutes “defeating” it? No idea. It’s simple enough for the shrines that conjure monsters, but not for the trap-based ones. The trap-shrines are per se clever, but also fail – each shrine comes with a dread proclamation from Nav’k-Qar’s doctrine, which are in no real way related to the challenge. Smart PCs can perhaps avoid some of the more deadly effects.

Oh, and if the PCs miss one trap, they may end up buried, which has excellent chances of further cave-ins killing them. The final treasures sport a save-or-die poison needle, where the pdf notes “and it would be a shame to come this far and be taken out by a needle” – that’s just dickish. Then again, after this module, failing to check for traps would be a gross oversight.

Editing and formatting, on a formal level, are pretty good. On a rules-language level, the adventure isn’t half as tight as usual for the series or the author. Layout adheres to the series’ two-column b/w-standard with solid b/w-artworks and functional b/w-maps. There are no player-friendly maps, which is a comfort detriment. The pdf comes bookmarked for your convenience.

Odd. James C. Boney’s adventures are usually better. This feels like a pretty uninspired convention-game meat-grinder, one that sports several rules-inconsistencies, is needlessly lethal without really earning it, and the bonus critters are uninspired. I can, from the top of my head, name more than 10 (!!) frog demon god-themed adventures that mop the floor with these shrines. The adventure has some great ideas in a couple of rooms, with perception-mind-games, but these remain an afterthought. All in all, this module suffers from its brevity and leaves me with an overwhelming feeling of missed potential. I can’t go higher than 2.5 stars on this one, rounded down.

You can get this brief meatgrinder here on OBS.