The Genius Guide to the Talented Ranger

The Genius Guide to the Talented Ranger 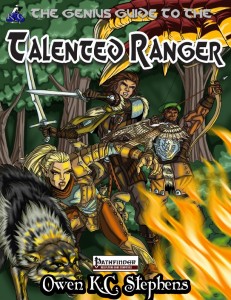 The latest in Rogue Genius Games’ much beloved restructuring of base classes to become more versatile and modular, this one clocks in at 41 pages, 1 page front cover, 1 page editorial, 1 page SRD, leaving us with 38 (!!!) pages of content, so let’s take a look, shall we?

So basically, the framework remains the same – full BAB-progression, good ref- and fort-saves, d10, 6+Int skills per level, proficiency with light and medium armors and shields and simple and martial weapons. Okay. let me go out on a whim here – Rangers and their spell-less brethren from Kobold Press are very popular in my group – why? Because they are melee guys with decent skills – they can be the smart investigators, urban hunters etc. Much like their other talented brethren, the talented ranger has now all its class options streamlined into edges, talents etc., allowing you full-blown customization of the class.

The Talented Ranger receives an edge at 1st -3rd level, 2 edges at 4th, and +1 at 7th, 9th, 10th, 13th and 20th level. They also start the game with 2 ranger talents and select additional talents starting 3rd level at every level with the exception of the 4th and 9th level. At 10th level, advanced talents are unlocked and the ranger receives two talents. He also receives 2 at 18th level and finally, at 20th level, the capstone Grand Talents are unlocked. If you need an explanation of edges/talents, please check one of my earlier reviews of talented classes.

That being said, the class, much like its barbarian brethren, does boil down the class to its basic concepts – adaptability being the key word here. While a kind of growing-into the respective roles/concepts is maintained in the design of the talented ranger, the way in which this is done can very much be considered interesting: Spellcasting progression, and yes, druid and arcane spellcasting, alchemist extracts etc. would be possible, for example, takes its toll on edges – subsequent spell levels require investment – they do not adhere to the usual, linear progression. Another issue the pdf elegantly circumvents would be favored enemy – easily the blandest of bonuses from the base class, many archetypes exchange it and thus, in a talented context, the stacking of bonuses of favored enemy-ish abilities and those usually exchanged for it, has been prevented by instead using the “favored enemy” bonus as a smart way of circumventing the issue.

Speaking of interesting options – would you rather bond with e.g. a weapon rather than an animal? Yes, this one would be possible. Now that would btw. be not all – some of these even have a massive array of sub-options and yes, ranger traps are also part of the deal here.

The talents provide further, massive customization options – and yes, there are some “hidden” trees in here, but much less than in the installment on the cavalier, for example. Terrain Mastery et al., Urban ranger trickery and the like are possible, and planning the progression of your talented ranger properly is an interesting endeavor – also due to the inability to break combat styles – the final “trap” of this talented class would have been balancing the combat styles and maintaining the relative linearity without losing flexibility – and this the pdf also manages to achieve. Among the advanced talents and capstones, wildcard edges (as a capstone) and similar tricks are in here as well – here and there, the unique possibilities of this reboot of the ranger receive their own, unique abilities – lending a distinct identity to the class beyond the default ranger, much like how the talented barbarian can be so much more than the frothing brute.

It should be noted that 2 pages of lists of talents by type/thematic group make selection of these easier.

Editing and formatting are top-notch, I noticed no significant glitches. Layout adheres to Rogue Genius Games’ two-column full-color standard with Jacob Blackmon’s glorious cover receiving a full-page spread as well. The pdf comes with massive, nested bookmarks for just about everything and the pdf comes also hyperlinked for your convenience.

I do not envy Owen K.C. Stephens the task of creating the talented classes – doing their math, checking combinations – even to write a review for one of these beasts tends to be A LOT of work and tinkering and taking apart the more linear classes without breaking them is not easy. The Talented Ranger is a prime example in this tradition, and while, much like the barbarian, I do not think we actually *needed* a talented ranger, the end result is so distinct, so potentially different, that even in the campaigns of people like yours truly who do not have an issue with the base ranger, the talented ranger makes for a versatile, cool addition. It simply has a massive array of new options and combinations available – my final verdict will hence clock in at 5 stars + seal of approval.

You can get this awesome class here on OBS!