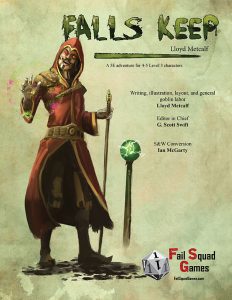 This version of the module is penned for D&D 5e, for 4-5 PCs. Or at least, it formally purports to be. The module is missing pretty much every instance of something that should be in italics, saves and checks are persistently formatted in the wrong way, and while the module contains a couple of statblocks, there are SERIOUS glitches in ALL of them. These range from improperly calculated attack values, incorrect damage averages, to damage types missing… or what about the BBEG’s statblock missing senses that he supposedly has an explanation for why he can’t be surprised. DCs are incorrectly calculated, there is an instance of something hidden missing a DC to find it, and there is an instance, where item durability is relevant…missing a damage threshold. In short: The 5e-rules are a sloppy mess; not in a gamebreaking manner, but in one that is seriously jarring if you’re anything like me and care about the like. You only want to dive further if you don’t mind that.

Genre-wise, Falls Keep hits closer to the dark fantasy side of things, sporting an instance where children might be slain, as well as a tragedy. It never devolved into grimdark territory, though. If you need a reference, I found myself most reminded of e.g. Tim Shorts’ less grim work, as featured in the Manor-‘zine. While 5e lets you choose whether to kill or subdue vanquished foes, I still strongly suggest bringing a paladin along, for lay on hands is one of the only ways to reliably cure diseases at a low level. The module is not exactly super-hard in this iteration, but it is no cakewalk either – PCs can very well die, and more importantly, be maimed permanently at one point.

Okay, and this is as far as I can go without diving into SPOILERS. Potential GMs should jump ahead to the conclusion.

So, the module kicks off in the vicinity of the Wheatwey farm, where the PCs are attacked by hens in a blind rage – these hens are cursed. These are a precursor of the things to come, namely two cursed children currently devouring a farmhand they dragged up into the tree near the well. The well contains strangely radiating water, which, as it turns out, is the source of the berserker-rage-inducing curse. (As an aside: The curse can be mitigated via remove curse, dispel magic or cure disease. This is my aforementioned gripe with the suggested level-range: The farm contains further cursed individuals, and without a paladin (who can use lay on hands to cure diseases – I assume that counts!), the group will not have a way to cure the cursed, save to put them out of their misery. Considering that there are cursed kids involved, this begins on a pretty darn dark note.

Anyhow, by carefully checking the strange, cursed farmstead, the PCs will be able to deduce the source of the contaminated water, namely the tower of the mad lord Venwexal, who retreated into it to escape the rebels during a recent uprising, sealing the keep behind him. Okay, so, what if the PCs cast purify food and drink on the affected? What about lesser restoration  or any other more likely option that PCs at this level should have? In many ways, this does not make use of 5e’s potential to a degree I’d consider to be satisfactory.

Venwexal’s survival is explained by an escape to the Lands of Lunacy (not required to run this, fyi)…and so, the PCs, provided they can best some worgs, gather clues from the remains of the Wheatwey farmer who perished here and the guardpost. Perceptive PCs can find a parchment and markings that hold the key to solving the puzzle required to enter Venwexal’s tower. As a curious aside: Cursed farm animals are MUCH more lethal than the worgs! The tower holds 9 holes, with handles, and the correct ones need to be turned in the right direction – trying to bruteforce this will btw. cost you your appendage, which can be pretty nasty. In 5e particularly, that is not something you’d usually do. Rules-wise, this trap uses a check instead of a save to mitigate, has an incorrect damage value, and does not format its magic blade properly. Speaking of which: The blades that cut off the appendages can’t RAW be disarmed or removed, or bypassed by magic, which rubbed me the wrong way as railroading. It should also be noted that the blades are, as written, +1 blades, and yet, the PCs have no means of removing them.

Things turn a bit sour in Venwexal’s tower, though. There is a metal rod causing AoE-blasts of electricity (it’s not called “electrical damage” – there’s no such thing in 5e; that’s lightning damage, FFS), and there are animated items – an armor, a table and a firepoker – with the latter using the stats for a flying sword. Spell/item-references here are not properly set in italics, and then, there’s the super railroady finale: Venwexal has 32 Hit Points and while his spell array in 5e makes him MUCH more interesting than the OSR-TPK-machine, the mad wizard has another issue: His addled state is due to a glowing rock that deals damage to those striking it. The stone has 60 HP, and notes no AC to hit, nor a damage threshold. Considering that destroying it is supposed to be the “good” way to solve the module, as it allows Venwexal to come to his senses, this is somewhat appalling. The stone orb’s destruction also makes the magical taint causing the curse to lift, but RAW does not end the cursed state of those affected.

Editing and formatting are bad on a formal and rules-language level; they disregard. Left and right, 5e-conventions, eking out a barely passable, and only because the average GM can run this as written. It’s not as bad as Marathon of Heroes, but it’s pretty close. Anyhow: You can run this. Layout adheres to a green-tinted two-column full-color standard, and as noted, the artworks presented are definitely my highlight of the book. A more printer-friendly version is included in the deal. Cartography is okay, and the lack of player-friendly maps is a bit sad. The pdf has no bookmarks, but doesn’t necessary need them at this length.

Lloyd Metcalf’s adventure Falls Keep starts off on a potentially pretty dark note, but one I’d generally like, were it not for the fact that the author obviously has serious issues with 5e’s finer rules components. Formatting is all over the place, and considering 5e’s simple math, there is no excuse for getting ALL stats wrong in some manner. Structurally, the railroading into the final encounter is okay, but both the BBEG’s spells and the environment make me marvel at the lack of lair actions, which are pretty self-evidently what should be here. If you can stomach the deeply-flawed formal criteria, there is a decent module to be found here, but much to my chagrin, the adventure, while working RAW/balance-wise better in 5e than for OSR, manages to suffer from a whole array of different issues than the old-school version. I wanted to like this, and just can’t. There is potential here, but it is squandered. 2.5 stars, rounded down.

If you enjoy my reviews, consider leaving a donation, or joining my patreon here.