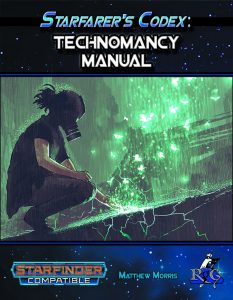 This installment of the Starfarer’s Codex-series clocks in at 15 pages, 1 page front cover, 1 page editorial, 2 pages of advertisement, 1 page SRD, leaving us with 10 pages of content, so let’s take a look!

We begin with a brief recap of the spells herein, and then a selection of spell lists by class – with the Starfarer Companion-classes bard, cleric, magus and wizard, as well as the witch, being covered. I am not a big fan of any of these classes, but if you are, I guess it’s nice to have them here.

The spells in this pdf are btw. technomancy in flavor – this does not mean that they are technomancer-exclusives – plenty of spells are also found on the mystic spell list.

All righty, we begin with a level 1 spell, namely archive memory, and it is a spell I love conceptually – it lets you store your memory on modules, with the amount of memory required being contingent on the amount of information you want to store. Unfortunately, there is no real guideline provided regarding item levels or the like – could you store everything with sufficient modules? Another issue is that you get to decide whether you retain the information or not, and whether you can recover t by connecting to the module, or not. This is a spell that is oddly wibbly-wobbly for Starfinder – and one that has serious repercussions for the realities of a setting it is introduced into. If this spell exists, why would any secret agency ever not make tons of use of it? The lack of more nuanced examples for modules required/storage capacity required for various memories also makes this a puzzling spell to handle – a great concept, with an nonoperational implementation. Circuit lets you link batteries and share their charge pools. Deceive surveillance is a 4th-level variant of holographic image that explains why not everything is automated: Automated cameras and sensors receive no saving throw to disbelieve the illusion fed to them, though guardsmen and AIs etc. do! I like this one, as it does add to the plausibility of the world. Decompose does what it says on the tin;depressurize targets a space suit or armor and exposes the target to the full effects of the environment.

Disguise companion is a nice one that lets you disguise your drones, companions, familiars etc., and stow companion is great, in that it lets you stow them in a demiplane. Electrostatic attraction glues objects together, using bulk as a scaling metric (smart!), with breaking the attraction causing electricity damage. Glitching curse is a specialized curse that makes tech fail half the time – it’s temporary, btw. It is a bit akin to short circuit, which is an object-targeted malfunction curse; Hobble vehicle reduces vehicle speed and full speed, and makes it harder to handle, while supercharge vehicle enhances it.

Hormone jolt is an interesting bludgeoning-damage cause battle spell (the target takes damage from spasms), and this particular spell explicitly provokes no AoOs. Infuse shadows exists for all 6 spell levels, and each spell level does something different: The first-level iteration is a soft terrain control spell; the 6th-level version is a close-range attempt to strangle a target with their shadow – and in-between, we have skittering spider-like climb speed and the like. Minor nitpick: “Throw” and “Spell Resistance” are not bolded in the spell’s write-up. Cool: Make an impromptu spider harness from electro-junk via junk powered armor? Yes, please! Miniaturize lets you shrink items for prolonged periods of time, decreasing their Bulk. This one might warrant careful consideration on part of the GM. It is cool and useful, but it could break some plots. As an aside: I’d suggest instead using the fantastic Sizechanging Rules by Everybody Games.  Phantom limb nets you a shadowstuff arm that allows you to hold an additional item at the ready – and explicitly just for that, but you may stack this spell with itself, controlling up to Intelligence modifier limbs at once. Subjective gravity is a variant of control gravity that does what it says on the tin.

Transport junkbot comes for levels 4 – 6, which makes junk into an impromptu, fully stated transport vehicle – and yes, stats for all three spell levels are provided. Ventilate cleans toxins and pollutants, which would be considered to be OP in SFRPG, were it not for the suitably high spell level – personally, I won’t use it, but that’s a matter of personal aesthetics, rather than a genuine gripe. Violent combustion, finally, is a level 4 variant of explosive blast., which might knock flyers to the ground – personally, I think the skill DC to remain airborne being fixed is a bit odd.

Matthew Morris’ technomancy spells were off to a bad start, but after the first spell made me dread the shape of things to come, the remainder of the pdf continued to deliver several interesting and worthwhile offerings. I e.g. am very much a fan of subjective gravity for the mind-boggling things you can do with it, and plenty of spells here are very much super-useful. While I am not blown away by all spells and won’t introduce all of them, I will certainly take a bunch of them on board. Considering the low price, my final verdict will be 3.5 stars, rounded up.

The fantastic Sizechanging Rules for Starfinder can be found here!

The pdf is also included in the big Starfarer bundle here!

If you’re enjoying my reviews, please consider a donation, or joining my patreon!