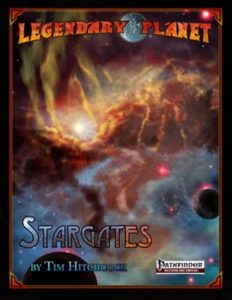 I was a backer of the Legendary Planet AP, but had no hand in the creation of this additional supplement, nor any other stake in it. I’m reviewing the Pathfinder-version, since that was the original system that Legendary Planet was designed for.

All right, so, Stargates, a crucial component of the Legendary Planet sword-and-planet setting, but similarly relevant for regular fantasy, for science-fiction, etc. – this pdf is about them. The introduction notes how the Ancients created them, but then does something helpful I personally enjoyed rather much – it talks about the theory behind Stargates, which is here represented by a base axiom – namely that energy can flow in a linear and non-linear manner. Energy traveling in straight lines, connecting points, would be considered to be part of the Weave, and while it is reliable, it only allows for relatively short-range transport. The Warp, on the other hand, is tapped into by non-linear energies: Stargates bend, ripple and fold energy, allowing for the crossing of the vast universe. The points in the warp, where an energy disparity is created, where surplus or deficit is created, can generate stargates. Transport is usually unidirectional, and manipulation of these gates requires more than just power and a set of coordinates, and as per the writing of the pdf, switching destinations is within the providence of the divine.

These basics out of the way, we take a look at gates in Legendary Planet: While they may differ greatly in aesthetics, they have a couple of common elements: They at least have to accommodate Large creatures, are almost exclusively found where humanoids once dwelled or still dwell (traderoute logic, obviously), and they may have singular or multiple connection points. Gates are circular, though they may be half-buried, round or oval, etc., and they operate in sync with the orbit of the world they’re on. They are treated as minor artifacts, making them nigh-indestructible, and while there is a way to sabotage them, it is a closely guarded secret privy only to the Bellianic Accord. Some gates are always on, some only activate at certain times, some are two-way, some one-way, some may be ignited by energy to stabilize them, etc.

After a couple of further angles for their flair, we begin with the creating a stargate-section: A stargate’s CR is equal to 1 + the sum of its modifiers. Weave stargates add +1, warp stargates +4; the longer the range, the higher the modifier: Solar gates get +0, planar ones +1, galactic gates +2, intergalactic ones +2, same as temporal ones, and intergalactic ones +3. Directions modify this, as does size, activation and the condition of the stargate: Extensive degradation makes activation harder, obviously. And yes, you read right – you can gate through time as well as space. All of these noted components not only are noted in a handy table, the respective entries also concisely codify them and explain the respective entries. Passing through a stargate may have complications – loss of memory regarding the world just left, limited number of passengers (awesome for PCs or BBEGs to escape!), etc. – a whole array of such special effects are available for customization of the gates. Of course, the individual manifestation also comes with a variety of cool effects – cacophonies, pure silence, modified gravitation, smells, etc. – cool!

Stargates may suffer malfunctions 1% base chance, though tables include further modifications for failure depending on degeneration, distance traveled, etc. – and yep, there is a table with 17 different sample malfunction effects included in the deal. From arcane backlash to mutations (10-entry subtable) to more, there, are some cool ones here. As a purely aesthetic nitpick, a couple of them do not have their header properly bolded. Odd: Something has SERIOUSLY gone wrong in the sample malfunction rules. The arcane backlash, for example, notes that arcane spellcasters are drained a certain amount of spells, but never specifies how many, and references “energy drain points”, which never are classified or properly explained. This does not work as written. The rules here also suddenly reference power score points for stargates, which are simply not there – not explained, don’t seem to exist. This, alas, compromises quite a few of the malfunctions.

Now, I already touched upon keyed stargates – the supplement differentiates between conditional keys, power keys and patron keys that can activate partially disabled stargates. Key subtypes are codified, including arcane, cosmic, psychic or technologic keys, to note a few, and the pdf provides rules for gate crashing keyed gates. The pdf also includes a total of 6 sample stargates that range in CR from 4 – 17, noting a kind of stargate statblock that lists all their components, a description and some flavorful text: From the twin pillars of Qa to the huge Pendulums, these are interesting.

The pdf includes two feats: Stargate Lore lets you use Knowledge (planes) to determine the details of a stargate, though e.g. divine gates may require Knowledge (religion) with this – the relevant skill for a stargate is the stargate lore skill. Gatecrasher, the second feat here, lets you use that skill to attempt to activate a locked stargate sans patron key. Beyond these, the pdf includes 4 spells that take the occult adventure classes into account: The 4th level massive-range detect stargate 4th level spell does what it says on the tin; divine destination, a 3rd level spell, grants limited information about the stargates’ destination. There also are the power stargates and greater power stargates spells that clock in at 4th and 6th level, respectively, with their effects evident from the title. The latter can be used to power dormant stargates. And no, neither mention afore noted nebulous power-mechanics. The pdf closes with 4 special abilities that may be used as replacement special abilities – while it is noted that they have mostly story purposes, all but one of them, which aligns a stargate with a patron or philosophy, the respective effects have actually been codified in a proper manner. As an aside: Personally, I think these would make for good roleplaying rewards.

Editing and formatting are good on a rules-language level – generally, it’s very good, but the malfunction-section totally falls apart, and there are components that are less precise; on a formal level I noticed a few minor glitches. Layout adheres to the beautiful two-column full-column standard of the Legendary Planet books. The pdf sports beautiful full-color artworks, some of which will be familiar to Legendary Games fans. The pdf comes fully bookmarked for your convenience.

Tim Hitchcock, with additional design by Jason Nelson and Neil Spicer, delivers a handy little booklet that helps thinking about stargates as more than a wobbly blue energy through which SG 1 stumbles to the planet of the week; the theory behind the gates does not devolve into technobabble and does its job – explain a plausible basic functionality, without forcing GMs to subscribe to some underlying principle of physics or arcane theory. In fact, I really wanted to like this pdf, and for the most part, I do love it. However, the matter of fact remains that the whole malfunction section falls flat on its face; to me, it looks like it has been taken from another version of the system, from another iteration/take on the concept, and simply doesn’t work as intended. As such, my final verdict can’t exceed 3 stars.

The 5e-version of this supplement can be found here!

The SFRPG-version of this supplement may be found here!