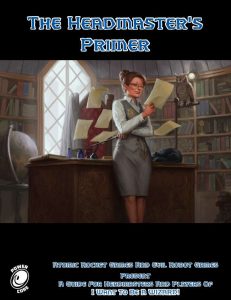 This is essentially the GM’s Guide for „I want to be a WIZARD!“, and it clocks in at 15 pages, 1 page front cover, 1 page editorial/ToC, 1 page SRD, leaving us with 12 pages of content, so let’s take a look!

The base pdf provides all the player-facing rules; this book sports the GM’s rules, but assumes that you have read these rules as well; that being said, the game begins with a GM’s FAQ, which clarifies some things that are not relevant to the players, but very much relevant to the Headmaster, such as whether opponents have Charm points, etc.

The first section after this provides a table with 3 columns – an adventure baseline generator, with a hook, a line and a sinker, as well as 4 brief adventure outline sketches. After this, we learn about a model to classify encounters and progression pacing, as well as 4 archetypical opponents – bullies, bad professors, etc., and the supplement also talks about not making a total party knock out the end of the game, as well as about allies. No stats for allies and these opponents are provided – oddly, we instead get stats for fairy, hill ogres and cockatrice.

After this, we’re introduced to a sample setting – the Barrow-Mann Academy, which includes information on history, so iron-clad rules, 4 new houses, 4 new familiar choices, and brief overview-descriptions of 23 locales, which are also shown on a surprisingly nice full-color map. 3 sample NPCs with full stats are provided here as well. A rule for a magical game, Barriers, the sport of Atlantis, is provided, and we get rules to use the mirror network.

Editing and formatting are very good on a formal and rules-language level. Layout adheres to a horizontal 2-column b/w-standard, and the pdf has no interior artworks. The text-density is very high – particularly towards the end of the book, it does become a bit wall-of-text-y. The full-color cartography is great, but no player-friendly, key-less version is provided. On the plus-side, a keyed version you can insert-style print yourself? That’s here.

Jim Milligan’s Headmaster’s Primer is not a bad supplement, but it didn’t deliver what I wanted or needed from it; the book provides no guidance how to determine fair TNs, how to handle odd movement, and how to design fair adventures. The generator is nice, but I’d rather have had a proper framework. The book assumes a pretty high degree of GM expertise, which is odd for a rules-lite game that is obviously intended to work for new groups. Most groups will probably end up using Harry Potter as a baseline setting, so while I liked the default setting provided and some of its ideas, I did wish the space had instead been used for more guidance and help for the Headmaster. I can’t claim, for example, that I have any firm grasp on fair challenges from reading this book; sure, I am experienced enough to easily run this, but as a helpful guide for the Headmaster? In that capacity, general advice and a robust sample system to determine TNs would have made a lot of sense.

As written, only GMs with a moderate level of previous experience will have an easy time with the system – new GMs might end up being more puzzled than required when faced with this book. In essence, the book fills in details without first providing the general foundation underlying the material, making improvisation harder than it should be. As such, my final verdict can’t exceed 3 stars.

You can get this GM’s guide here on OBS!

The player-facing rules can be found here!

If you value my reviews, please consider leaving a donation, or joining my patreon. Thank you.