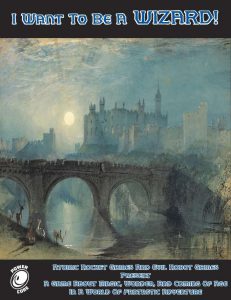 This game clocks in at 9 pages, 1 page front cover, 1 page editorial/SRD, leaving us with 7 pages of content, so let’s take a look!

All right, one of the pages is the student sheet, which should give you a good idea what to expect – “I want to be a WIZARD!” is a rules-lite roleplaying focused about coming-of-age stories in the tradition of e.g. Harry Potter – as such, the introduction takes the form of a letter of acceptance into the Academy of Magic and Sorcery.

The process of character generation is depicted in steps, and neatly fits on one page:

Step one lets you determine 3 attributes – Mental, Physical, Social. You distribute 14 points among them, minimum 2, maximum 12. Average score (5e) is noted as well.

In step 2, you determine Spell Power, Toughness and Charm. You determine these by adding +1 to each of the corresponding three attributes: Spell Power is Mental +1, and denotes the number of spells you can cast in an encounter. Physical +1 is Toughness – you can take this many hits before you’re knocked out. Charm is Social +1 – in an encounter, you can add one six-sided die to any roll for each point of Charm spent. You get Charm back at the start of an encounter.

After this, you determine your heritage – whether both your parents were magicians, one of them was, or whether they’re both mundane people. These net skill bonuses; Magician kids get +1 to ttwo of the following skills: Alchemy, Divination or Transportation. Mundane kids can select only one of two skills, but get +2; mixed heritage kids have the most choices available.

The character starts with 1 Marker in Courage, Wisdom, Loyalty, Cunning. The choice of the familiar (4 are provided) nets you a +1 to one of these. Then, you determine where you’re from. These influence both one of the Markers and a skill. HOW the childhood was spent, e.g. on the move, also provides such a bonus to Marker and skill. The type of child you were (sneaky, scrappy, friendly, etc.) also adds to the Marker. After this, we determine a driving motivation, which, you guessed it, nets an increase to a Marker and skill. After that, the headmaster determines the house, which nets a +2 to a Marker and a skill: Serpent’s Head e.g. nets +2 to Cunning and Magical Artifacts.

The character level equivalent is the school year – there we go, ready to play in a single page, and rules simple enough that even young kids can grasp them easily!

As for the game: Every encounter you overcome nets you 1-3 experience points, which can be used to buy skills and attributes; you may increase the values during the summer holidays or winter break. Increasing an attribute costs 10x the current attribute; increasing a Marker costs 5 times the current value. Skills cost 2 for the first point; after that, it’s always the double the current skill. The maximum values are 12.

In encounters, the students pick a brave leader, who rolls 2d6, adding the Physical attribute, Mental if they want to do something pertaining spellcasting, etc., and then go highest to lowest. Essentially, you decide whether you do something Physical or Mental and that affects your turn in the initiative order. One student is the Watchful Eye – they go last, but may once per encounter just Spring into Action, automatically causing an action to fail. For opponents, the Headmaster (the moniker for GM) uses Cunning, then Courage, then Wisdom, then Loyalty to tie; if all tie, a 2d6 roll determines who goes first. Additionally, the brave leader can grant any student except themselves +1 to initiative by spending 1 Courage to temporarily increase Physical or Mental. The Watchful Eye can undo 1 point of damage by spending 1 Cunning, or they can instead take damage by spending 1 Loyalty.

How are things done? The Headmaster determines a Task Number, TN – essentially a DC. Then, they determine which attribute applies, which skill, which marker. The student rolls 2d6, and adds the rest, optionally spending Charm for bonus d6s. Snake eyes (double 1s) denote a critical failure, double 6s a superb success. If you spend Charm, you need to have 1s on all 3 dice to fail, but still succeed superbly on 2 6s. If you meet or exceed the TN, you succeed.

The pdf then walks us through the 16 skills. Spells all cost one Spell Point, and you need a wand (though it can be another object!), a kind of focus, without which you add 6 to the TN of spellcasting attempts, and don’t get Markers added. Once per turn, the familiar gets to do something for you.

Damage is simple: You roll e.g. Dark magic and compare it to the defender’s Protection roll – defenders win ties. Successful hits cause 1 damage. At 0 Toughness, you are Knocked Out, and ned to see a physician, headmaster, etc. Valuables are named coins, and three sample items are included.

Editing is very good on a formal and rules-language level – the rules are clearly-presented and easy to grasp. Formatting is a bit inconsistent and uses a lot of italics. Imho, it’d make sense to both bold and italicize Spell Power, Toughness and Charm to set them apart; Toughness is later both bolded and in italics. Cosmetic glitch, though. Layout adheres to a horizontal 3-column standard, and presentation is clear and precise. The pdf has no bookmarks, but needs none at this length.

Jim Milligan’s little homage to Harry Potter etc. is a solid little rules-lite game. The game, as written, allows for some tactics, though more roles like Brave Leader and Watchful Eye would have been nice to see. I’d also have liked some sort of information regarding movement, but that may be me. As a whole, this is an easy to grasp, flavorful little game, and if you want to teach kids how to play, then this works rather well. All in all, a nice system; not a groundbreaking one, and it could offer a bit more in terms of long-term campaigns, but it does its niche well. My final verdict will be 3.5 stars, rounded up.

You can get this inexpensive game here on OBS!

The GM’s Guide can be found here.

If you consider my reviews to be useful, please consider leaving a donation or joining my patreon.