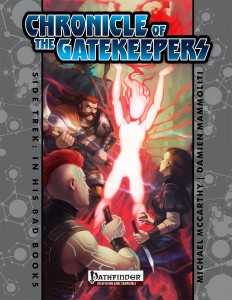 This installment of the chronicle of the gatekeepers campaign serial clocks in at 12 pages, 1 page front cover, 1 page editorial, 1 page SRD, 1 page back cover, 1/2 page advertisement, leaving us with 7.5 pages of content, so let’s take a look!

All right, only GMs around? Great! Just because you’re a creepy, poisonous scorpion-person doesn’t mean you don’t have feelings, right? Large-Biter, the sassori-contact of the PCs as they investigate the incursion of the Vesparans into NeoExodus, has a past – and this time around, it’s a delicate matter. You see, the sassori’s former adventuring companions split after he confessed his love to the Cynean (crystal-person, for NeoExodus-newbies) conjuror of his group. Yep, the cynean is a man, so we have a queer romance backdrop here – personally, that is something I enjoy to see. And no, this is not something particularly dominant or the central theme here, but still – nice to see some diversity here.

Anyways, the Cynean Raxe has his own issues, as will become readily apparent upon the PCs finding his cottage, built around a dormant Nexus Gateway: There is a stone pedestal outside, and in it, you can see A BARBED DEVIL. Yep, CR 11. No, the PCs should NOT try to kill him…or…well, they kind of should. You see, when the Nexus Gateway flared to life, Raxe summoned the creature, but had it locked in the circle. Unfortunately for him, he lost the book containing the means to dispel the devil to clumsiness and the machinations of a nasty imp and has been locked inside his safe room ever since. (Which btw. is the only component along the access tunnel to it not mapped.)

The PC’s task is clear – Stop the annoying imp and get the formula book…or find the well-hidden dispel-roll buried in the garden (taking anti-detection spells into account – kudos!!) and get rid of the devil. Sure, they could also haggle with it OR destroy it from afar with the proper strategy (it’s what my PCs did), but at this level, all such options are potentially dangerous. Raxe is thankful for being freed from this predicament and has a nice ritual to open Nexus Gateways to share alongside a warning (and yes, if they elect to kill him instead, there is an alternative to get the info), thus leaving this sidetrek with a crucial piece of information and some interesting insight into their employer’s past. A new magic item is also included.

Editing and formatting are very good, though at one time, the GM-only part of the text refers to the devil as a demon…yeah, I know, nitpickery…Layout adheres to LPJ Design’s elegant 2-column full-color standard for the series and the module comes fully bookmarked and in a second, slightly more printer and mobile phone-friendly version. Tommi Salama’s map of the cottage is glorious and the added inclusion of a player-friendly map is much appreciated.

Set-up-wise, this is probably the most boring of the CotGK-sidetreks I’ve read so far, but it played as the most interesting: First of all, we have CHOICE and player-agenda: This is a mini-sidebox that very much leaves how to handle it up to the players. There are ample choices to deal with the threat in various ways and variations of the two major approaches to handle the issue. It’s also a good module in that it emphasizes a sense of caution and shows the PCs that not every threat can be defeated by brawns alone. Yes, the backdrop may not be particularly exciting, but the playing-quality of this one is high – it’s basically a big puzzle-encounter that can be solved in various ways – and for that, I really like it! My final verdict will clock in at 4.5 stars, rounded up to 5.

You can get this interesting sidetrek here on OBS!

Want the whole subscription instead? You can get it here on OBS and here on d20pfsrd.com’s shop.