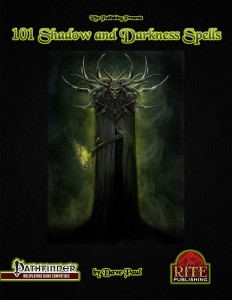 The fourth installment of Dave Paul’s thematic spell-collections clocks in at 47 pages, 1 page front cover, 1 page editorial, 1 page SRD, 2 pages of advertisement, leaving us with 42 pages of content, so let’s take a look!

We begin this supplement with a piece of information that makes you appreciate the things to come – namely, a list of diverse lighting conditions – 8, to be precise. Does this terminology seem overly complicated to you? It’s actually not – it simply codifies what’s already out there in proper terms. The darkness you can only see through with magical aid? Jep, that one has no its own concise terminology. Spells affecting the shadows of targets also offer an issue – where is the shadow? How long is it? An easy default-ruling plus GM-empowerment-statement result in a basic framework that is more solid than what I expected going into this book.

After the massive array of spell-lists (including, obviously, the ACG-classes), we dive into the respective spells – and fret not, there are quite a few spells and effects herein that deal with light as well: E.g. better sight in good light conditions that can be expended for a bonus to saves vs. blindness etc. Taking a cue from the Dark Souls-game-series, Cloud of Fire and Shadow (erroneously called Cloud of Shadow and Flame below the gorgeous artwork depicting it) provides a nasty, powerful terrain control that not only sets up shadowy terrain, it also can deal negative levels and fire damage and even move the cloud around – OUCH. Absolutely awesome – contrast orbs that allow you to modify lightning condition, move it around and utilize the orb to generate contrasts to the lightning conditions caused. It also provides a significant array of catch-terminology for all kind of movement and cases that would have generated gaping rules-holes in the hands of a less capable designer.

It should be noted that this attention to detail, which ultimately renders the spells very precise and versatile, also extends to the spells utilized to creating light and shadows. Want your own shadow plane pocket dimension? The spell is in this book. Want to go nova and blast foes with dazzling rays emitting from your body? There’s a spell for that – one that may be chosen as a sun domain spell. Want to condemn a target to emit supernatural darkness, which not even darkvision can penetrate? Yes, the spell is in this pdf. Speaking of curses: Cursed to Walk in Shadow is narrative platinum, nay, mithril. You curse a target- whenever the creature walks in bright light for too long, there is a chance the creature slips into an eerie duplicate of the surroundings, shifting to the shadow plane. If you need any guidance why that’s creepy, may I point towards the Silent Hill games…only the duration is shorter for each trip. Still, this spell is incredibly awesome and could carry a whole campaign. Absolutely glorious and perhaps one of the most intriguing spells from a narrative point of view.

Of course, more combat-relevant spells for quicker movement in shadows (can I get a “Nice!” from the Dishonored-fans out there?) to magic-impeding darkness, these spells offer a vast array of tactical and narrative options.

What about the long overdue darkness-based mirror of daylight powerlessness? Indeed, the spell is in this book and the quality it bestows should be scavenged for monster-creation rules…and it should have been part of the base rules from the get-go. Granted, though – not all spells reach this abject level of awesomeness – there are some variants like shadow-centric dispels I consider to be slightly less compelling and more like variants. Immediate action steps into the shadow plane for 1 round can also be considered rather intriguing, opening a new array of tactical options for the characters employing these spells. Want to glamer your shadow or assume the form of a darkmantle? There are spells for this around here…

Among the most powerful spells herein – what about making a target carry, literally a piece of the night sky with him alongside the darkness – which makes this both a curse and a blessing, the latter primarily for the undead… Supernaturally clear sight is powerful – but at higher level, it gets awesome: What about a spell that conceivably allows you to grant such a power to vast amounts of allies, allowing e.g. armies to combat invisible foes? Communal spells and a shadow-based blinking effects (with unique rules), shadow or light-based force-explosions or stripping a target of its shadow provide unique benefits that resonate well with the tropes we all know and love. What about gazing to the stars to detect creatures, as the lines between stars, silvery and shining, guide your intuition? Fantastic visuals.

Speaking of which: If your shadow touches a creature, you can switch places with it via shadow transposition…and if you can’t see the vast tactical potential here, I can’t help you. Speaking of which – there is a high-level spell to pit a vast area into perpetual darkness…which is an apt and awesome final spell for this book.

Editing and formatting are top-notch, I noticed no glitches of significance. Layout adheres to Rite Publishing’s classic full-color 2-column standard with a purple-ish tint and the book comes fully bookmarked for your convenience. the book sports numerous gorgeous full-color artworks.

This book is more than a return to form for author Dave Paul…though that may be the wrong way to put it. Basically, the first two books are pretty much my reference-level of what an awesome spell-book should be. The third fell slightly short of this echelon-level of awesomeness. This one, quite frankly, surpasses them. Yes, there are some minor hiccups here. Yes, some of the variants are not that awesome.

But I am not engaging in hyperbole when I’m saying that no other spell-book has inspired me to the extent this pdf managed. There are spells herein that not only will be a vast boon to each light/darkness-themed character, the book also sports concise terminology and several spells that conspire to allow you to create effects for campaigns: Whether you want a vampiric domain of eternal dark, a narrative of Silent hill-style cursed characters, Plane of Shadows-related awesomeness – this pdf delivers.

To an extent, where I actually think it transcends the limitations of its own focus, of its genre. This book can conceivably be read not only as a cool expansion to e.g. the arsenal of Ascension Games’ “Path of Shadows” or as a mechanical scavenging ground to get inspiration for more material for Interjection Games’ Antipodism-designs; this book actually could conceivably be considered a selection of spells that allow you to depict creatures of shadow, whether they be shadow fey, dark creepers or shadar-kain, as thoroughly unique. Beyond even that, I maintain that the spells herein can carry whole modules, perhaps even whole campaigns. This is one of the few spell-books out there that can be considered to be so inspired it may be worth the effort to change modules and perhaps even plotlines to utilize it – it’s that good. This is the most inspiring spell-book I’ve laid my eyes on in quite a while – and well worth a final verdict of 5 stars + seal of approval. It is also a candidate for my Top Ten of 2015. If you like the theme in any shape, way or form, then this is a must-have, inspired book.

You can get these superb spells here on OBS and here on d20pfsrd.com’s shop!