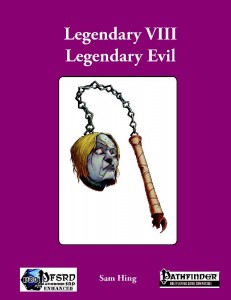 The seventh installment of Purple Duck Games’ superb series of magic items that improve over the levels is 40 pages long, 1 page front cover, 1 page editorial/ToC, 1.5 pages of SRD, leaving us with 36.5 pages of content, so let’s take a look, shall we?

Okay, let me come clear for a second – I’m a complete sucker for legendary weapons. No, not the mythic kind, but the ones by Purple Duck Games that have been established for a lot of installments – weapons that grow with the character are just awesome. Until now, the focus has been mostly on tools for the PCs, though – now, we get an arsenal not only fitting for PCs in Way of the Wicked, but also for villains.

The first weapon already sets a cool tone: Thematically spiced with Freeport-lore, the Adderwhip, a whip that was crafted in Valossa, consisting of a magical serpent added to a bone and potentially making for a whip that not only stings, but rather bites and which comes with the speed weapon property.

The greataxe of Minos makes the wielder an nigh-unstoppable juggernaut, including an imho broken upgrade to crit x6 (!!!) over the levels, whereas the planar assassin’s dagger Black Spider may actually not only nullify SR, it may actually animate as construct! One weapon the PCs will both covet and hate would be the bow of swarms, whose projectiles may actually distract targets as the swarm quality and even assume control of swarms. The Brothar Hammer is also intriguing – made from a humming metal, it incites melodies and weird sounds – at level 18, it gets an ability to KILL ANY FOE on a failed fort-save of DC 15+damage dealt. Which is insane, even at this level. Here, we require a generous application of the nerf-bat. I’m also not a big fan of the hammer’s concentration-ruining humming – at DC 25, no scaling, it starts off as very strong – oh, and the pdf fails to specify what type of action making the hammer hum thus is. The Undead Flail, made from a decapitated head, also has an ability that should never fall into player hands – at 18th level, the wielder may auto-control all undead, with intelligent undead getting a save – but not what the save actually is. I assume standard for supernatural abilities, but getting the DC would have been nice – this holds true for multiple abilities throughout the pdf, by the way.

Oh, speaking of nerfbat – the flail automatically MAXIMIZES any spell of the necromancy school or evil-descriptor within 20 feet, sans cost to the caster. This is insane and broken on so many levels, I don’t know where to start. Next: The pyromaniac dogfryer, a magic goblin dogslicer. At 12th level, the weapon has a cool ability, idea-wise: “The wielder of dogfryer may attempt to destroy writing within 30 ft. One page of nonmagical writing is instantly destroyed per ranged touch attack. Magical writings receive a Will save to resist the effect. This is used to target random pages in opponent’s spellbooks.” Oh, this is problematic – does a spell that lacks one page stop working? How do you randomly determine spells/writing erased? Does this extend to allies? This ability is woefully under-developed and simply doesn’t work as intended. We also get a staff that sacrifices your familiar to be added to its form and instead allows you to conjure forth said familiar in a dire version. Unfortunately, there is again a weird piece of rules here – the wielder may assume the form of his/her familiar, but has the potential of the familiar’s spirit highjacking the transformed body. Why should ANYONE go for that? Limited polymorph that sucks? Yay? Also: what about witches using the staff? Can they still regain spells? Do they require a new familiar? I don’t know.

The diseased fungal bolas that may spawn violet fungi once again work, though the item feels a bit on the weak side for me. The Ghost-Fire Battle Poi once again work as intended and should be considered a cool weapon. Grasping Electrum also fits this bill, being a meteor hammer that allows the wielder to create silver and golden motes and direct them versus foes. The war-rake Griffon’s Claw, especially effective versus mounted and larger foes and a cutlass allows for the raising of galleons.

The deadly spear Heart-Seeker and Hell’s Eye, the infernal pistol work rather well – the latter getting a special shot that fires…teeth. Those of the same type of the tooth’s “donor” suffer the damage of the tooth again until the offending tooth is removed. Speaking of infernal – the Infernal device can change between dagger, buckler, short-sword and dart-launcher – cool idea! The scythe infinity’s edge could e summed as a monofilament-scythe and thus later gains the vorpal quality.

The leaden spear has a cool story and deals additional damage due to its weight – but does not specify how heavy it is. :/ The Liar’s Tongue allows the wielder powers that make the rather cool seducers, including a capstone ability that allows them to twist wishes most maliciously. The Linnorm Blade has a cool idea  -allow the wielder to place curses on foes in lieu of attacks – but at what DC? As SU-standard or as per bestow curse? It does not specify…

The maticore-themed morningstar Manticora and the Saurian Armorspikes once again work rather nicely (if a bit clunkily in the case of the former), as does the ooze-flinging slime mace. The club Stonefist unfortunately once again is broken. The first ability allows for EVERY ATTACK to force a fort-save or be knocked prone. Yes. You can hit dragons or the Tarrasque prone with that one. Again, no DC. Why not CMD? And why EVERY hit? At 4th level? WHAT? No way. Worse, later, the hits automatically fling ALL targets of size large or smaller away. Damage + prone+ whatever obstacle available.

Editing and formatting are not up to Purple Duck games otherwise high standards – I noticed both minor glitches à la “Many” instead of “May” and wordings that could have been clearer. Layout adheres to PDG’s printer-friendly two-column standard and the pdf comes lavishly illustrated by Tamas Baranya – all items get their own cool signature drawings in gorgeous full-color. the pdf is extensively bookmarked.

What has happened here? Seriously, this is not what I’ve come to expect from either author Sam Hing, or Purple Duck Games. A significant amount of weapons herein is downright BROKEN and unbalanced as all hell. (Haha!) there are various instances of item-mechanics just not working as they ought to according to established rules and the lack of DCs for supernatural abilities is quite a comfort-detriment, especially when properly scaling DCs could save multiple abilities herein. This pdf feels like a BETA-version  -a multitude of awesome storylines oozing flair, iconic weapons, neat ideas – and then, the glitches and at times utterly broken abilities drag down this pdf. I wanted to love this pdf, in fact, I waited for a moment of disillusion to review this one since usually, the series has established a high standard of awesomeness and fodder for villains and evil PCs sounded like fun galore. Unfortunately, while these weapons may work for DMs to add an unfair edge versus PCs, they should never ever fall into player hands – as written, there are far too many balance-issues herein that simply unhinge a game and could mean the difference between victory or TPK. Yes, that significant.

I have honestly no idea how this could get past editing – I made sure I got the updated version, but still – a significant amount of crunch herein is utterly broken. Which sucks and is just bitter, since the ideas, the stories, are downright AWESOME. This is one of the pdf that leaves a very distinct bitter flavor in my mouth. As much as I love the ideas herein, I can’t recommend this pdf to anyone but DM’s willing to work quite a lot to iron out the issues. In the end, I can’t rate this higher than 2 stars, in spite of evident potential that could have made this the 5-star+seal crowning achievement of the series. Let’s hope for a completely revision.

Youc an get this supplement here on OBS and here on d20pfsrd.com’s shop.