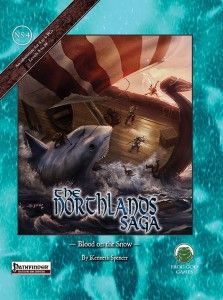 The fourth installment of the Northlands-Saga-series is 28 pages long, 1 page front cover, 1 page editorial, 1 page ToC, 1 page SRD and 1 page advertisement, leaving us with 23 pages of content, so let’s take a look, shall we?

Still here? The area of Estinfird in the Northlands is depicted in lavish detail regarding its infra-structure and  mindset – considered rather provincial by the jarls of the Northlands, this area is a true frontier among frontiers, where men are truly free and not even the yoke of jarls reaches. The geographic area by the way also includes full settlement statblocks for all mayor settlements herein, lending a further level of detail to the respective settlements. But what exactly requires the PC’s intervention? well, unbeknownst to just about all mighty beings, the beast-cult of the demon god Shibauroth has been gathering its strength: Making its adherents rather stupid, but enhancing them into deadly, primitive, cannibalistic killing machines via twisted runes, the cult has risen and seems to follow a surprisingly organized plan. The PC are to travel to the largest settlement, the town of Three Rivers, where local hero Hengrid Donarsdottir has traveled. On their way, they can recruit essentially a small army of undisciplined followers and hirthmen (alas, no Ultimate Campaign-synergy) to help the beleaguered capital of Estenfird.

On their way to Three Rivers, the PCs will have chances to deal with first encounters against the Beast Cult and, via befriending the Great White Stag, potentially even turn an otherwise lethal ambush upon the bestial cultists. In order to reach the city, they’ll also have to sneak past the camps of the unorganized cult. Finally, inside the town, the PCs will have a bit of time to get accustomed to the fully mapped and lavishly detailed town before the horns are sounded and the assault begins – depending on the amount of followers the PCs have recruited, the respective monsters get hurt/decimated. Oh boy – the siege is awesome – standing on doomed ground, the PCs will have to combat elementals, badger-sapper-squads and even keep a war-mammoth from breaking the nigh-impregnable gates – all while ice trolls and drakes ravage the town in one of the most concise, superb depictions of a deadly siege I’ve ever seen.

As the dust settles, the PCs  will be in for a shock – the aasimar warrior-maiden has been kidnapped! Thus, the PCs have to enter a haunted marsh and infiltrate the poison-thorned, hedge-labyrinth of a frozen marsh maze in which the beast cult seeks to sacrifice the daughter of Thor himself in order to bring down their deadly beast-god: The finale sees the Pcs storm the ritual and hopefully free Donar’s daughter from her bonds – otherwise, the terror has just begun. Oh, and bravery is required here – essentially the final encounter is insanely hard and requires the PCs to  focus on their goal of interrupting the ritual – should they succeed, Thor himself will annihilate the beat cult and scourge it from the lands. And while the treasure is rather weak due to the savage nature of the cult, the Aesir don’t forget the PCs, as the module concludes with a feasting held by Thor himself to congratulate the PCs – if they succeeded, that is. If they failed, they’ll have a  CR 22 Thanatotic Titan on their hands and survival chances that are at best slim…

Editing and formatting are good, though not perfect – I noticed some minor glitches here and there. Layout adheres to FGG’s printer-friendly 2-column standard and the pdf comes both with lavish maps and artworks as well as extensive bookmarks for your convenience.

Kenneth Spencer continues to deliver and provides an exceedingly awesome, cool module that breathes the spirit of Sword & Sorcery, dark fantasy in the north and simple panache to an extent that made me marvel at how the author managed to cram that many awesome ideas into the scant few pages. Now the module is not perfect – no Ultimate Campaign-support, some minor glitches – but this is epic, versatile and just compelling in so many ways, all of these nitpicks are swiped away by the sheer awesomeness of this superb module. Fans of Northlands and their lore, savage cults and challenging modules that push your players to the edge – this is for you! This is old-school awesomeness and Frog God Games very close to at their very best – my final verdict hence will clock in at 5 stars + seal of approval. When do we get part 5?

You can get this AWESOME, challenging module here on OBS and here on d20pfsrd.com’s shop!

Are you truly old-school? Well, here is the Sword & Wizardry-version on OBS and here on d20pfsrd.com’s shop!