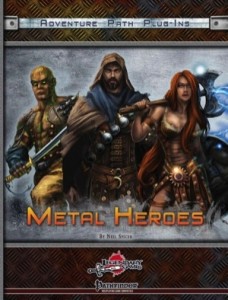 The pregens for the Iron Gods-AP as presented herein are based on a 20-point-buy, with scaling options for the more gritty and lethal 15-point-buy options provided for each of the characters herein. Following the format for the pregens created by Legendary Games, the basic set-up adheres to a pretty concise formula: Each of the characters presented in these pages comes with a one-page full-character rendition in full-color, supplemented by a piece if in-character prose that pertains to the basic outlook of the individual. Beyond the basic statblock for the character, the pregen does provide an excessive array of notes for the background of the character, the personality, advice for further character advancement and yes, roleplaying ideas.

The organization of the pdf adheres to a format of 3 – 4 pages per character, with each being presented in a way that does not overlap with the others. This means that you can just print out the characters and hand them over to the players without having to cut characters apart. While this does result in some blank space, I’m a big fan of the practice since it renders using the pregens easier. Finally, there are fold-up paper-miniatures on the final page, should you like using them – a nice bonus to have!

So what would the characters be? Well, for one, there would be Ander Six – if the uncommon name is no indicator – yes, this would be an android, once enslaved by the Technic League, who has since broken free of their yoke to swear eternal enmity against the technology-using tyrants. Build-wise, he is a slayer and interestingly, his signature katana and proficiency makes sense – the slightly above-average strength of the android-race is thus well-balanced, while, from a narrative perspective, Anders provides ample narrative potential for questions of identity-constituting elements and similar narrative veins.

Bersaivius Mendren would be a blood arcanist who was not supposed to become an adventurer – born to humble origins, when a transport of alien parasites stopped at his home, one escaped, changing the young man forever. Plagued by a strange disease that is rewiring his brain and changing him into something that may no longer be human, his intellect soared as he slowly became entwined with Oturu, his fully-statted tumor familiar – so he wanders, a sickened body wrapped in bandages, looking for means to find the truth about himself and the strange condition and power that has changed the course of his life. The build of Bersaivius is fragile, yet interesting – nothing to complain about.

Drunah Dagur is a savage woman – red-haired and powerful, she not only resonates with the iconic imagery of Red Sonja – her tragic background and vendetta with mechanical beasts also predestine the bloodrager as a powerful foe versus robots and the like: Where Anders is focused more on the humanoid element, Drunah certainly makes for a formidable foe versus the creations of science, especially due to her elemental bloodline.

The gnome Falston Katcherby, an alchemist of the preservationist archetype, certainly could emphasize with the notion of Pokémon – “Gotta catch ’em all!” With well-connected ties, the gnome exhibits the delightfully obsessive and enthusiastic personality that rendered the race interesting for me within the context of Golarion – but beyond that, his passion for the striving for knowledge indeed make him a great scholarly explorer – one that may well go full-blown mad scientist, yes, but that is, ultimately up to the player. Have I mentioned that he actually has a smart rat that follows him and may or may not hold more secrets? Yeah, cool!

Tavarest Ivaine would be not only a cleric of Brigh, she is also an oread on a mission to preach the gospel of her deity, blessed by the expanded perspective her race and calling provide, though also seeming, ultimately, like a bit of an enigma to those among whom she moves. With metal fist and magic stones, she may not be the best front-line fighter, but as support, she does work.

Kheldric Lybrien would be a middle-aged steel hound investigator, an experienced traveler of the wastelands with specific ideas about the metal monuments dotting the wastes; an archeologist by vocation, an adventurer and truth-seeker by calling, his radiant ideology and pure heart seeks to bring justice to the world – though he, like Drunah, has suffered the loss of a spouse, though in Kheldric’s case, he may find the truth even worse – still, between the two, there is quite some potential for romantic relationships to be formed – if they can sort out the differences in age and stand up to the loss experienced, thus providing a nice narrative of transcendence.

Lyel Vergess, the pistolero gunslinger, also has a bone to pick with the league – born into money and still opposed to the league’s machinations, he has ran afoul of them on more than one occasion. By now, Lyel has had his fortunes take a turn for the worse once again and found himself on the run – only to meet aforementioned android, whom he’s been teaching the intricacies and peculiarities of human interaction. While by no means explicitly implied, Lyel and Anders could make for a pretty uncommon relationship, if your group is open to such a constellation. Interesting, btw.: He does the “two-face”-move with a coin – but with a twist. What twist? Well, that I will not tell. 😉

Rikka Nufhari would be a ratfolk burglar rogue, one born into wretched poverty, who has still managed to claw her way to some semblance of prominence, with useful connections and personal ties to Falston, the short-lived ratfolk may have only seen 14 summers, but she is wise beyond her years and ultimately, flames that burn short often also burn the brightest. As a rather versatile character, she also offers some interesting upgrade options at later levels.

Editing and formatting are very good, I noticed no significant glitches. Layout adheres to a beautiful two-column full-color standard with superb artworks provided for each and every pregen herein. The pdf comes fully bookmarked for your convenience and also provides helpful hyperlinks for all the less common rules-components.

Providing an array of pregens has to generally accomplish more than one task – beyond simply providing a group of NPCs, simply having actual reasons for adventuring, an implicit line of what to do, an ideology, helps indeed. Beyond this component, though, the more challenging aspect would be to ensure that, in spite of class balance and race balance discrepancies, none of them overshadows the others in a given collection -you need to establish a degree of lholistic cohesion and Neil Spicer has here succeeded in this endeavor.

An obvious issue in the case of Iron Gods would also be the temptation of providing technology from the get-go, something the player’s guide advises explicitly against. Now if you *do* want technology ASAP, you’re covered with a character herein, but no, he does not begin play with it, thus avoiding this pitfall. The android race, represented in a build that does not overshadow his brethren, is also another nice detail that sets these heroes apart, rendering them more fitting for the AP. The discrepancy among their alignments and philosophy are subsumed under the general themes evoked in their backgrounds, so yes, all in all, this is a great collection of pregens and well worth the asking price. My final verdict will clock in at 5 stars + seal of approval – what more can you expect from pregens, after all?