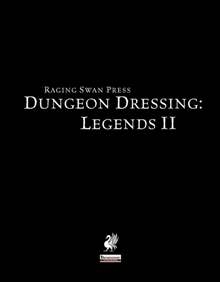 We kick off this pdf with 10 legends about lost treasures (wrongly headed by a d20 -as are all tables herein) – take the potion of permanent invisibility and its unhappy, now mad first imbiber. Or what about a magic armor that protects from all blows, but did not save the wearer from being eaten by otyughs. D10 famed adventurers also get their own legends –  From Ley Blude, the seductress to the Gardener, an assassin whose only trace is a smell of roses or a druidess raised in fungus-filled caves.

We also get 10 legends on dungeon features – extradimensional rooms, a beehive of smart, exceedingly deadly bees, tunnels or a room that has a window that always show winter. What about a palace of rice paper, with the final artwork in the center having been consummated and completed by the murder of the artist. We also get a table of 10 dungeon inhabitants here – from doorways leading straight to hell, a hall inhabited by a dryad, a gold-digger’s ghost to humanoids, we gat an okay selection of legends here.

The final table deals with events and deeds, again offering 10 entries, this time handling e.g. the theft of the Scrolls of Nethnargay, treaties with dark fey or the imminent quartering of an ogre – these legends once again are awesome and iconic.

Editing and formatting are very good, though the tables sport the wrong dice-type. Layout adheres to RSP’s two-column b/w-standard and comes fully bookmarked. We get two versions, one optimized for screen-use and one to be printed out.

Pierre van Rooden’s first collection of legends resonated exceedingly well with me – they universally caught my imagination and just were AWESOME in every way. This pdf…had a hard time following that legacy and it unfortunately didn’t live up to it.

After careful deliberation, I determined the culprit – essentially, most of the entries (up until the dungeons) are simply not legends. they’re rumors or character descriptions, but they do not offer the symbolic gravitas of legends, the sense of antiquity, of the supernatural, the unexplained. Instead, many of these legends actually sound more like regular PCs/NPCs/thing happening in many a campaign – and thus lack the sense of wonder in the context of a fantasy universe. Now don’t get me wrong – this pdf is not bad by any means, it just feels not like it’s focused on legends, but rather like an unfocused dressing-pdf offering a gamut of short tables for varied topics. This does not make it bad, but at least for me, it makes this pdf work much less well than its predecessor. There is magic to be found here, just not that much. My final verdict will hence clock in at 3 stars.

You can get these yarns to weave into your campaign here on OBS and here on d20pfsrd.com’s shop!