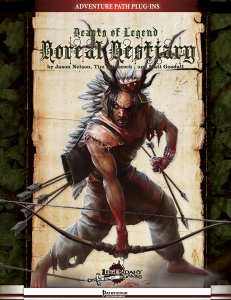 After a short introduction of the monsters herein, we dive head-first into the new beasts herein, first of which would be the CR 4 Arctic Harpspider, a spider that plays a hypnotic, haunting tune via its crystalline web –  cool! At CR 5, Green Children are small undead spawned from the soured mires of the colder climates and they are GLORIOUS: They can phase around, use deadly pack tactics versus their adversaries and get three (!!!) different types of gaze attacks – from stripping foes of sleep to wis-damage and starvation-based non-lethal damage, these attacks are cool and the creature is both disturbing and awesome – that is great monster-design there!

Gruen are disturbing, small CR 1 fey with lower torsos of centipedes and wide, insectoid maws that may affect foes with nauseating bites and they may also benefit from slopes by curling up – deadly and almost aberrant allies of mites. On the opposite of the CR-scale, at CR 16, are the scraggly  huge humanoids called Hiisi, which are not only masters of exotic traps (with 4 sample traps), they may also bleed themselves to generate dead magic zones – which makes for GLORIOUS tricks to spring upon those pesky spellcasters. Awesome!

Also on the upper CR-range would be the Maniitok at CR 17, a colossal intelligent ooze born from spirits and desolate landscapes, these beings have hyperaware senses and thus avoid civilization with no less than 7 (!!!) signature abilities/weaknesses, including some that differ depending on the temperature – awesome! Just glorious!

At CR 10, Orroul, the stone fey, have already featured in Cold Mountain, so I won’t go into details regarding that cool creature here. The CR 14 Poleviks are essentially fey-slashers that deal with their adversaries with chain-linked double-sickles and garrote their foes, even stealing their souls. Worse, they can fashion a variety of fetishes from said souls. Disturbing and oh so cool…

The Torden come as CR 3 and CR 7, black-antlered humanoid hunters of the cold lands, these beings may cause hypothermic bleed and boost allies via their hunting horns. Vodenjak, at CR 6, would be gaunt, dark ferrymen that may drink the souls (and make potions from them) of the dying, grant limited wishes to petitioners and conceal their less than savory intentions. GLORIOUS!

The Wiitikowan (lesser Wendigo) comes with no less than 3 sample creatures at CR 6, CR 4 and CR 3 as well as the surprisingly cool template, either at same CR or at CR +2. Beyond treating the Wendigo-myth more like a disease/curse, the template also offers synergy with the sanity-system introduced in “Tomes of Ancient Knowledge”.

The final regular page features paper minis of all the creatures and finally, the end of the book offers awesome 1-page hand-outs of the illustration for each creature herein – awesome to have those ready to show to your players and even cooler to have them all collected in the back of the book.

Editing and formatting, as I’ve come to expect from Legendary Games, is top-notch  -I didn’t notice any glitches. Layout adheres to the glorious 2-column portrait full-color standard of the Kingmaker-plug-ins. The artworks by Tanyaporn Sangsnit, Jason Juta, and Frank Hessefort are SUPERB and drop-dead-gorgeous – each creature benefits vastly from the evocative artworks. The pdf comes fully bookmarked for your convenience and the pdf comes with a second, more printer-friendly version.

Jason Nelson, Tim Hitchcock and Matt Goodall have crafted an array of exceedingly awesome all-killer, no-filler monsters herein – oozing a sense of antiquity, folklore-flair and combining that with signature abilities galore, each being in this book is just a glorious monster that mops the floor with the majority of creatures out there – if Paizo released a full bestiary of creatures of this quality, everyone would be screaming about the best bestiary ever – it’s that good. With a lot of space devoted to each creature, lore, stellar artworks, player-friendly artwork-handouts (“THIS attacks you!”) and sheer imaginative potential, these beings have the space required for them to shine. And yes, you may know some of these beings from e.g. the excellent “Cold Mountain“-adventure, but believe me – this bestiary is well-worth every cent of the asking-price, making for one of the best mini-bestiaries ever released for any d20-based system -Period. Final verdict? Unsurprising 5 stars + seal of approval – Legendary Games once again lives up to the premise of the company name – legendary indeed!