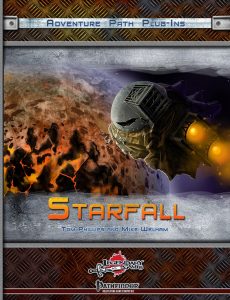 Okay, this plug-in for Iron Gods…wait. Scratch that. This is basically no plug-in, it’s a damn huge expansion. Starfall clocks in at 76 pages, 1 page front cover, 1 page editorial, 2 pages of introduction, 1 page ToC, 1 page SRD, 1 page back cover, leaving us with 69 pages of content, so let’s take a look!

This module is intended for 13th level characters, who should, in the process of this module, gain about 1.5 levels worth of XP. The pdf provides two technological items, the photon pistol (with stun and kill-settings) and the radiation suit and sports, creature-wise, the toadhemoth, which would be a CR 14 variant of the froghemoth. A mythic creature, the Qomok, first featured in Mythic Monsters: Aliens is also featured in this module with its full and deadly stats. The numerous maps in full color are also featured in player-friendly versions that lack tell-tale keys and legends, which is great indeed to so.

So, that’s basically the gist of the basics – in order to go into more detail, I will have to, obviously, go into SPOILER-territory. Potential players should jump to the conclusion to avoid having their experience soured.

All right, only GMs still around? Excellent! The adventure begins inconspicuous enough when the PCs happen upon Kreth, who hails them in order to ask for their assistance: His tribe, the Shadow Crow nomads, have fallen victim to raiding giants that came upon them with a strange, crab-like entity. The expedition to reclaim the kidnapped individuals has, alas, been a total failure and resulted in the deaths of many capable members of the tribe – and this is where the PCs come in, as they track the brutes, deal with a behir in the wings and stumble upon a lethal ambush-site, where the crab-thing has prepared an ambush most lethal, for it is no mind-less brute, but actually one of the dreaded neh-thalggu. The fight is on…and then, something unprecedented happens – a strange silvery egg appears…and the brain collector seems to actually be terrified of it!

The weird apparatus emits a massive blast that paralyzes those hit and then proceeds to accelerate the PCs and the neh-thalggu into orbit, protecting them from the deadly journey…and then the fight ostensibly resumes encased by strange glass walls, as the residents of Ardent Hope observe the strange savages (the PCs) fighting. The Dzjaeri, pale, live-skinned humanoids observe this curious result of the malfunctioning AI within the strange silvery egg. After hostilities are resolved, the strange observes open communications, informing the PCs of the need to sterilize them before flooding the chamber with a strange, sickening hazard before opening the secured arrival rooms…and beginning negotiations. One of the Dzjaeri apologies for the inconvenience imposed upon the PCs (though they are held at gun-point for now) and explains their situation: It seems like the probe that brought the PCs to the Ardent Hope has been destroyed…which sees them stranded in orbit. Yay.

Things are even better – you see, the Ardent Hope is basically toast at this point: The Dzjaeri can’t colonize and move down to Golarion since a bacterium that exists there triggers lethal brain aneurysms in their kind – and the neh-thalggu’s collected brains seem to offer a means or at least a lead on how to fix this issue…for it’s only a matter of time before the ship ceases to function. A previous malfunction has already compromised the Terrestial Enclosure and tainted it with the bacterium and, what’s worse, neh-thalggus have actually escaped. 8 of them. The reactor has went offline as well and the air and nutrient processors went offline with it. Thousands of their people, still in cryogenic sleep, await a grim end indeed.

The deal offered by the Dzjaeri Jathis is simple: Eliminate the escaped neh-thalggus, secure the brains and reactivate the failed systems and he’ll awaken an engineer and have him prepare an escape pod for the PCs. Sounds like a cake-walk, right? Well…no. The Ardent Hope, depicted in lavish detail, has visited quite a few worlds before it started to fall apart to this extent and thus, the terrestal enclave now houses some rather interesting creatures, like aforementioned toadhemoth, lethal flora or plant-elk herds. Aurumvoraxes and lukwatas complement the trip through jungles most alien and the hidden control room now sports an assortment of the dreaded brain-collectors.

Interesting, btw. – repairing the service lift etc. – all of that is not the finale. Not even close to it. A) The PCs won’t find the neh-thalggu…at least not all of them. B) the qomok I mentioned before? Well. Now awake. And suddenly the timer starts ticking, mercilessly towards extinction, as the stardrive’s self-destruct sequence has been initiated. You know, the drive that keep the huge asteroid-space-station afloat in orbit? Yes, this is a problem – a huge one. Worse yet, the countdown means that the PCs, from now on, must hurry – and the cat-and-mouse game has now been extended to also including a transdimensonal entity that basically is a take on Carpenter’s “Thing” or dead Space’s dread Necromorphs – the entity tries to assimilate basically anything it can get in its dread clutches. It is powerful (mythic even). It’s smart and deadly – but for now, the PCs will have to brave hull breaches and tackle varied technologies in order to prevent the Ardent Hope from plunging drive-less into Golarion.

Whether you integrate the qomok hunt (and their gambit to make landfall and spread on Golarion…) into this frantic series of events or restructure it to do the action first and then the bug hunt, the module does accommodate for that. Speaking of which: Realize how my own review so far assumes, at least to some extent, cooperation with the Dzjaeri? Well, while this may be the default assumption of the module, it is by far not the only playstyle covered. My own players are far too mistrusting (and have, imho correctly, deduced that the Dzjaeri may well pose a threat to Golarion in the long run…brains and stuff…) and promptly turned upon them. The interesting component here may well be that a couple of unique robots and stats for the NPCs, security nodes etc. can also make this module work as a free for all, though this playstyle requires a slightly more experienced GM. Why does this work? Well, because the Ardent Hope actually sports *A LOT* of material regarding its environments, unique challenges and hazards and entities . you are not reduced to following the proposed script here, though this still feels very much like a story-driven module.

Editing and formatting are top-notch, I noticed no grating accumulations of glitches. Layout adheres to legendary Games’ beautiful two-column full-color standard and the pdf sports numerous artworks in full color, all of which are excellent, though fans of LG may know some of them from previous publications. The cartography is extensive and neat in its attention to detail, though not as impressive as the artwork. Still – the player-friendly maps are a huge boon and make for neat handouts!

What happens when Tom Philips and Mike Welham join forces? Awesome, that’s what. Starfall is a massive module with potentially apocalyptic consequences, should the PCs fail. While the beginning is a classic, lackluster-looking bait-and-switch, that is by design and interesting. The new race/culture depicted herein is equal parts interesting and disturbing and would make for a great cast of allies…or villains. The use of the powerful entities, the switching of tempos from exploration to frantic hustling for one’s life and the different themes evoked throughout the module nonetheless coalesce into a concise whole that makes for a long, fun module that not only works within Iron Gods, but makes for a pretty seamless insertion into most campaigns – though, obviously, characters even halfway capable regarding technology should be assumed. Then again, PCs that do not try to eradicate the Dzjaeri always have these guys to fall back on, which means that not even this is a requirement.

All in all, this module is fun, diverse, has some unique challenges and plenty of potential to be customized for various vastly diverging playstyles. Hence, my final verdict will clock in at 5 stars + seal of approval.

You can get this damn cool expansion-module here on OBS and here on d20pfsrd.com’s shop!
Endzeitgeist out.