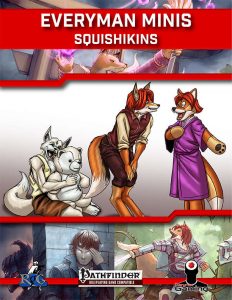 This installment of the Everyman Minis series clocks in at 9 pages, 1 page front cover, 1 page editorial, 2 pages of SRD, leaving us with 5 pages of content, so let’s take a look!

So, what are squishikins? Well they are a new race presented within, a kind of living construct in the shape of a helpful ability to transform themselves into plush. As someone who cherishes his old plush-Kiwi, this made me smile. The squishikins are noted as 2 – 3.5 feet in size and 20 lbs. weight; while no age, height and weight table is provided, in this instance, this information suffices.

Rules-wise, they get +2 Con and Cha, -2 Str,a re Small, have normal speed and are constructs with the shapechanger and squishikin subtype. They thankfully don’t get the massive array of construct immunities. They have darkvision 60 ft. and low-light vision and always treat Perception as a class skill. They can transform into a diminutive toy shape, analogue to tree shape sans the bonuses and immunities, but with a +10 racial bonus to Disguise. At 1st level, they choose whether they look like an animal or anthropomorphic humanoid. The former nets a 1d3 primary bite attack; the latter a humanoid subtype with a racial trait of the race to not exceed 3 RP. Polymorph effects chosen make the alternate versions resemble stuffed toys as well. Squishikins can hold their breath 4 times Con-mod round and work sans water for 1 + Con-mod days, sans food for a week before needing to make checks to avoid starvation and dehydration respectively.

It is pretty impressive to see the flavor of the race, expertly crafted, to actually make the concept come alive. We get favored class options for bard, fighter, oracle, paladin and rogue – no problems with them. The pdf sports two feats: Adjustable Size lets you change minor details of your appearance sans the usual penalty and lets you assume sizes between Fine and your form. Improved Facsimile lets you choose an additional benefit, depending on whether you chose animal or humanoid. It may be taken multiple times and provides access to further racial tricks or animal abilities (limited in a smart manner). The pdf also provides a CR +0 simple template to instant-squishikin-ify creatures. Cool!

The pdf provides 3 different class options: The order of the nightguard protects the civilians from the horrors of the night and nets a bonus to weapon damage in dim light or darkness via challenge. Skill-wise, Knowledge (local) and Perception are provided, and the latter do not change while asleep – a potent benefit for squishikins, who already have Perception as class skill hard-baked into their engine. Making a check while asleep lets the cavalier wake up. The order abilities begin with ever ready, which translates to Alertness and Lookout; all allies are treated as having Lookout, which is pretty nifty. Uncanny Reflexes at 8th level net Blind Fight and + being treated as having cavalier level ranks in Perception for Blind Fight prereq’d feats. The ability also nets + Wisdom modifier (min 0) AoOs per round (doesn’t stack with Combat Reflexes, but is treated as such for prerequisite purposes) and the cavalier may substitute Wisdom mod for Dex-mod for Combat Reflex prerequisite feats. 15th level nets blindsense 30 feet, based on audio, which doesn’t work versus incorporeal targets.

The sleepytime trickster mesmerist replaces the 1st level trick with hypnotic lullaby. A target of hypnotic stare may, as a swift action be targeted and must succeed a save of gain the drowsy (mild) condition from the fantastic Everyman Mini: Sleeping Rules, slowly building up to sleep. At 11th level, the mesmerist can target creatures other than those affected by hypnotic stare. At 3rd level, rule minds and touch treatment are replaced with 3 + Cha-mod times per day Sleep tight – a standard action that requires touching a target that’s asleep. On a failed save, the target falls into a slumber so deep he temporarily can’t be awoken. 6th, 10th and 14th level allow for longer increments of duration, with the latter also placing the target in temporal stasis while asleep, while 20th level upgrades sleep to permanent and the mesmerist may have unlimited contiguous sleepers, ending the previous limit on simultaneous sleep tight effects. Love it. At 3rd level, hypnotic stare can get rid of immunity to sleep effects, replacing bold stare.

The third archetype, the toymaker alchemist replaces bombs with a squishikin companion that works like a variant druid companion. Brew Potion and Throw Anything are substituted with Craft Wands, treating alchemist levels as aster levels for the purpose of other crafting feats. This is relevant, in that alchemy is altered to become toymaking, which replaces extracts with knickknacks; these behave like spells in wand form with a single charge and thus qualify for crafting purposes. Extract modifying discoveries instead apply to knickknacks. 2nd level adds all conjuration (summoning) spells from the sorcerer/wizard list and the druid list to his extract list, and such called critters get the aforementioned squishikins template instead of the usual templates. 6th level nets Craft Construct instead of poison use and the 2nd and 6th level discoveries. 3rd level allows the toymaker to heal squishikin subtype quicker 3 + Int-mod times per day and at 6th level, crafting is sped up. At 9th level and every 2 levels thereafter, the archetype chooses a complex construct modification with a CL equal or less class level; as a standard action, the toymaker can touch a squishikin creature, granting it one of the chosen modifications for 10 minutes per class level with 10 minutes per level duration; the companion may be upgraded with these permanently at half the price. This replaces poison resistance and immunity.

Editing and formatting are top-tier on a formal and rules-language level – I noticed no glitches, no inconsistencies. Layout adheres to Everyman Gaming’s two-column full-color standard and the pdf sports adorable artwork. The pdf has no bookmarks, but needs none at this length.

Alexander Augunas’ squishikins are amazing on multiple levels: On a design-level, the pdf manages to do a variety of unique and creative things with the base race – sans making it too strong or weak. The supplemental options have strong themes and creative, complex rules that I thoroughly enjoyed, and the flavor is amazing. The squishikins as a race are amazing for kid-friendly games…and, paradoxically, also for horror games! You can make these super-creepy if you want; that’s not even implied in the wholesome pdf, mind you – it’s just where my twisted mind immediately went…Oh, and the flavor and prose for them also rocks!

In short, this is a superb example of concise race design, and a resounding success on pretty much every level. 5 stars + seal of approval, given without any hesitation!

You can get this amazing race here on OBS!

Missed the sleeping rules? You can find the pdf here!

Campaign idea: Kids + their plush protectors! You just need this and Childhood Adventures…which can be found here!