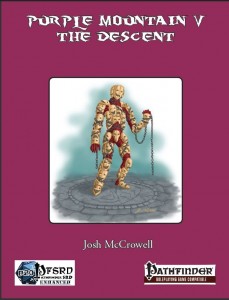 Any DM who has ever run a mega-dungeon had this experience: At some point, even in hostile depths, the players need a homebase to study, retreat to etc. Preferably one that is not as monster-infested and/or hard to access/easy to defend. Enter this level, which not only spans a variety of heights (as evidenced by 4 maps, lending a sense of depth to the module), but also an uncommon premise, but let me go on a slight tangent first:

Let’s face it: The underdark is a damn scary place – more so in a dungeon. Even before monsters and vile civilizations enter the fray, the claustrophobic sense of entrapment is a very real danger we all can relate to – as is the sheer weirdness of what can be encountered in the depth. When I saw my first stalactite, dove into the first subterranean pool of water, I felt a sense of exhilaration derived from an explorer’s mien that is so hard to come by these days as well as a profound sense of the alien, of a place not meant for men. Many modules forget this sentiment of feeling like one doesn’t belong – not so this one, for this level of Purple Mountain actually is an investigation.

Yes. An investigation. In a dungeon crawl. And one that actually makes sense! But let me elaborate: This level is essentially the story of a “safe zone” gone horribly awry – the adventuring group that once made this place their base has suffered a terrible fate, having been driven slowly into a paranoid insanity by subtle fungus spores lacing everything. As an old Ravenloft-DM, I’m all too aware of the power of sowing paranoia and distrust not only between characters, but also players, but the way in which this module does it is awesome, because it’s subtle – because you don’t expect it. As the PCs explore the place and unearth the puzzle-pieces that paint a disturbing tale of suicide, hatred and escalating violence, so do they slowly descend into madness, lest they take heed and carefully nurture bonds of trust – a glorious opportunity for roleplaying, which may be handled sans mechanics or with them: Either option for the paranoia-inducing fungus is given.

Beyond even that, the areas per se actually feature one of the creepiest adversaries I’ve seen in quite a while and provide some rather horrific experiences a DM can further enhance by the virtue of this level’s special qualities. And yes, before you ask – there is enough to be done for all those aficionados of hacking and slashing things to pieces – it’s simply not the module’s only (or even cardinal) virtue. Another interesting facet of this installment of Purple Mountain would be the fact that, yes, we once again get the useful lists of treasure etc. and their value, and yes, the treasure is above what one would expect  -but the respective treasure is also not always easily transportable, unwieldy or simply hard to find – so yeah, something I can get behind. Another thing I’d especially like to point out towards any authors really: If you craft elaborate back stories (helloooo, PFS!), make room for the PCs to actually GET TO EXPERIENCE/PIECE TOGETHER the story. This module does it right – by putting together the pieces, the PCs can actually find the cause of what has happened, making the module succeed where so many have failed – and without resorting to captain exposition to boot! And yes, I’m aware I’m being uncommonly vague about the details here – but I wouldn’t be able to do them justice here and I really think you should see for yourself.

Editing and formatting are top-notch, I didn’t notice any glitches. Layout adheres to PDG’s 2-column printer-friendly standard and the module comes with some really nice pieces of full color, original artwork. Furthermore, the pdf comes fully bookmarked and with player-friendly high-res maps of the complex. The cartography does its job and the pdf comes fully bookmarked for your convenience.

Third in a row. There are not many series that have done it – Purple Mountain now officially has. Author Josh McCrowell does not disappoint after the stellar third and fourth installment and adds his own twisted take on paranoia, horror even, by providing this eclectic mix of brains and brawns, a module that can be a crawl, but works just as well as an investigation, by creating a dungeon-module that could be toned up to emphasize the fantasy or the horror aspect, “as”, the bard would have said, “you like it.” For once, roleplaying does not fall by the wayside in a dungeon crawl and the intricately-crafted level of detail and sheer ingeniousness of the place makes this once again a 5 star+ seal of approval recommendation and further cements Purple Mountain as a dungeon you should not let you pass by – especially since it works so easily as an insert into just about any other subterranean complex. Old-school dungeon awesomeness indeed.

You can get this awesome dungeon-investigation-horror-crawl here on OBS and here on d20pfsrd.com’s shop!