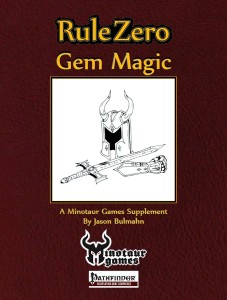 So…socketed magic items. In this system of magic items/gem magic, armors and weapons can have one socket, two (two become available for base items of +3 and better enchantments) or even 3 (+5 and better enchantments), staves can have one socket and other magic items get up to 1 socket, unless being categorized as a major magic item, in which case they may have 2 sockets. The first slot costs 500 Gp, the second 2000 Gp and the third 4000 Gp. Gemstones can be created analogue to other magic items via the Craft Gemstone-feat. Upon insertion, a gemstone requires 1 hour of attunement before conferring its bonuses and inserting the gemstone takes one minute of precise, deliberate and careful insertion – no quick switching. Gemstone effects, unlike otherwise noted, are supernatural abilities.

Aforementioned attunement-period can be shortened via one of the 3 new spells. Another one of the new spells allows you to go horadrim cube on gemstones and fuse multiple gemstones of a lesser quality into one of a higher quality. The final spell would be the true winner, though – allowing you to grow a socket as a third eye that holds temporarily a gemstone as if you were an item of the “other” category, not requiring an attunement time due to the short duration. Damn cool!

Now I already mentioned gem quality – essentially, there are 4 different qualities, from worst to best: chip (2 K Gp), shard (8 K Gp), gem (18 K Gp)and jewel (32 K Gp). Now when inserted into armors, these items generally offer a passive benefit, when added to weapons they offer either passive bonuses or weapon quality-like benefits à la additional sonic damage. Staves benefit from being studded with gems by allowing the staff to use charges to produce a spell in a can and the other benefits… well, are other and vary wildly all over the place. Now thankfully, designer Jason Bulmahn has not simply lazily stepped up the respective benefits for each quality, but actually offers some interesting varieties here: Let’s take the agate as an illustrating example, shall we?

When used in an armor, a agate chip halves stealth-skill armor-check penalty when in fog, rain or similar weather. A shard completely allows you to ignore armor check penalty when in such a weather. As a gem, an armor-inserted agate also offers the spell-like ability to 3/day use obscuring mist and see easily through the mist in addition to the base effects and in the jewel form, the wearer may also turn greater invisible for a limited duration. When instead inserted into weapons, we get a non-linear progression: In chip-form, atk-rolls are not penalized by moist weather, whereas in jewel form the weapon deals additional sonic damage and has a chance to cause deafness upon criticals, but no access to the chip’s benefits. The stave-inserts allow access to obscuring mist, gust of wind, call lightning and control winds, respectively. Finally, the other-category offers at first a +2 bonus to saves versus inhaled poisons, then +2 AC versus nonmagical ranged attacks and at gem-level, we add feather fall to the latter benefit, while finally, the jewel also grants access to fly.

A total of 24 classes of gems, each with their 4 steps of quality are provided, and they do all provide rather versatile options of effect on all steps.

Editing and formatting are top-notch, I didn’t notice any significant glitches. Layout adheres to an easy-to-read, easy to print-out 2-column b/w-standard and the b/w-artworks provided are neat. the pdf unfortunately has no bookmarks, which is a rather significant comfort detriment. Anotehr comfort-detriment would be that the gems are supposed to have the auras of the spells used in their creation – however, while the spells are mentioned, the auras have to be looked up unless you have an even better memory than I do and can recall the auras of x spells from the top of your head, when this unnecessary book-flipping could have been easily avoided.

Socketed items rock. I love the idea and the gems herein work well and offer cool, versatile benefits. And in fact, you be seeing me jump up and down and singing the praises of how this pdf offers a vastly superior option to the lame ioun stone insertion of the Pathfinder Lodge in Golarion – and said praise would be justified, seeing that this system, at least in my opinion, is vastly superior and more interesting.

So…what’s the catch? The lack of bookmarks hurts this pdf. And there this other socketed magic item-system, Interjection Games “One Bling to Rule Them All“.

And while Interjection Games’ system has some minor flaws, the overall content is more exciting, at least to me: Essentially, it allows for 3 classes of mundane items that turn magical by inserting PAIRS of crystals that can be switched on the fly or by inserting permanent special crystals -said crystals cannot easily be identified, categorized etc., but they do have an inherent susceptibility to having their unique effects counterspelled. In Interjection Games’ system, we have also an extremely broad selection of unique effects, just about all of which don’t just provide spells in a can or duplicate effects, but rather do unique things, like conjuring a cloud of vampiric mosquitoes that heal you or another one that allows you to survive a fall from orbit or, or, or, or. The permanent crystals can be handcrafted in a staggering variety of ways.

Rule Zero: Gem Magic, is a tad bit more concise in its rules-language, but the respective benefits are also less imaginative than in its competitor – Interjection Games’ supplement often had this “no other spell/magic quality/etc. does that”-effect, making it as a supplement, at least for me, more rewarding. Yes, Rule Zero: Gem Magic also thankfully treads new ground, but in a less pronounced way that didn’t leave me cold, but also didn’t blow me away.

In the end, both systems have their benefits and drawbacks and particularly adept DMs may want  to get both and combine them. Personally, I prefer the wild ideas of Interjection Games’ supplement and if you’re a fan of uncommon ideas, I suggest you take a look at it, but undoubtedly, this is still a very good supplement and if you’re a stickler for perfect rules-grammar, Rules Zero may be the better choice for you. My final verdict will hence clock in at 4.5 stars, rounded down to 4 for the purpose of this platform.