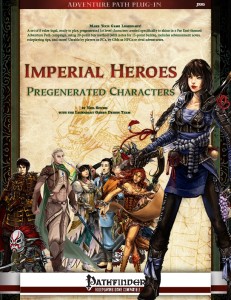 This collection of Pre-gens for the Jade regent-AP is 28 pages long, 1 page front cover, 1 page editorial/SRD, 1 page introduction/how-to use,1 page author bios/back cover, leaving us with 24 pages of content, so let’s take a look!

The first thing you’ll notice is that we get whole-character-pictures in gorgeous full-color for every character as well as a sample quote from the respective character. On the second page devoted to a character, we get the respective character’s statblock, whereas on the third, we get advice on scaling them down to a 15-point build (the characters are made via a 20-point build), an extensive background, roleplaying ideas as well as ideas for character advancement. Nice!

Now what are the characters? Well, first would be Akobi Thiesson, half Tiun/half Chelish honor-guard cavalier who also gets a childhood crush on the destined empress (that translates to a mechanical bonus -nice!) who also has increased starting money due to his rich parents. His sister Jin,a rogue, who worships a certain elf (again, translating to mechanical bonuses) is the second of the potential characters – making for a nice dynamic between the two.

Masato Koshin, a Tiun martial artist monk makes for the first full-blooded Tiun character and has been hired as both caravan guard and has the air of a philosopher/monk prodigy that has suffered from internal politics Caladrel Quervari, an elven bladebound magus -who suffers from the voice of his not yet awakened black blade.

Sarounne Anzoletta, a fiery, dancing scrollmaster transmuter makes for an uncommon, interesting build of a unique magical tradition that makes her scrolls dangerous beyond the magical powers she commands. Kieyanna Wade, half-elven cleric of Shelyn and best friend of the destined empress, is a beautiful maiden raised in the temple – and, unbeknownst to her, not a true orphan but the daughter of Caladrel, making for VERY interesting roleplaying potential.

Ragnar  Bralgweir, an Ulfen invulnerable rager makes for the next of the characters and the mountain of a man is impressive indeed. And then, we get the final new character, Nurch the easily-overlooked: A *drum-roll* masked goblin ninja. Having been rescued from his brethren, Nurch has developed a fascination with writing and, via Tiun-scrolls he managed to decipher, learned the way of the ninja. AWESOME character-concept!

Editing and formatting are top-notch, I didn’t notice any glitches. Layout adheres to a glorious two-column, full-color standard and the artworks with their quotes could easily be used by DMs as handouts if the characters themselves are not used. The fact that e.g. the cavalier gets mount-stats as well is a nice touch and the pdf comes with bookmarks and in two versions, one being slightly more printer-friendly.

The artworks by Tanyaporn Sangsnit, Frank Hessefort and Colby Stevenson are GLORIOUS and on par with paizo-levels of awesomeness and the pdf is also hyperlinked to d20pfsrd.com in an unobtrusive manner. Nice!

Wow. Author Neil Spicer has created quite an array of compelling, unique characters that would not only work well as PCs, but also as NPCs – even if you don’t plan on using these as PCs, their characters and awesome artworks mean that most DMs will find some ways of making these compelling additions to their campaigns. Now, I would have really loved form-fillable versions of the characters that allow them to be printed out as a sheet and upgraded/modified at higher levels, but one can’t have everything, I guess. That being said, this collection of pregens leaves almost nothing to be desired, is iconic and cool and the inclusion of a goblin ninja is glorious. Even Ulfen barbarians and Varisian wizards get their own, very distinct spin that immerses them in a given setting and the ties to the Jade Regent storyline mean that I can happily and wholeheartedly give this a final verdict of 5 stars – not only for those interested in running Jade Regent.

Get this awesome collection of pregens here on OBS and here on d20pfsrd.com’s shop!