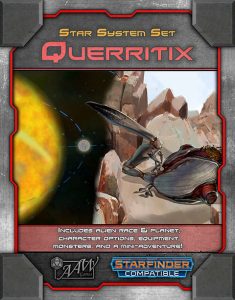 Each star system consists of 6 different such cards, meaning you’ll get a page-count of 12 pages. In order to facilitate posting the reviews for these component pdfs without having to rewrite my review time and again and losing time to cut-copy-pasting etc., I’m going to structure this review of the complete set accordingly. This set was penned in its entirety by Michael Allen.

Since I will base my reviews on the collected sets, I will provide an overall conclusion etc. at the bottom.

On this card, we are introduced to the Querritix system, which features a yellow dwarf, 4 planets and an asteroid belt – the latter actually features a couple of terraformed dwarf planets with potentially dangerous atmospheres. (And yes, we get an artwork depicting the system!) The planet closest to the sun, Schyllus, is a nickel planet that combines Con-track poison with radiation. The second page is particularly devoted to life here – which is mostly found on the planet Rendari and, surprisingly, the asteroid belt. Indeed, Rendari does have unique defenses – its 16 moons plus asteroid density make it, well, not exactly easy to navigate to, but present an excellent defense versus meteorites. 4 fluff-only entries of neat sample NPCs (with suggested levels/classes and race etc. noted) are provided, and the card also comes with 3 different adventure hooks that all have an interesting angle regarding the new race featured in this system.

Interesting system; not groundbreaking, but worth checking out. 4 stars.

So, the new race here would be the haesten, who receive +2 Dex and Cha – 2Str, 4 HP, darkvision 60 ft. and a +2 racial bonus to Acrobatics and Athletics. They are Medium aberrations and get +2 to KAC versus combat maneuvers. Oddly, here, the bonus is untyped, when typing it as racial would make more sense. The glowing eyes and membranes of the haesten also provide a +2 racial bonus to Bluff checks made versus creatures that can see them. A big plus here would be that the race is actually interesting: The haesten, while known for being a race of philosophers and smart folks, do have a unique lifecycle and represent an interesting inversion: Artwork-wise, they are very much reminiscent of the mi-go, though they represent a more benign version of the classic. That being said, their hatchlings are pretty much dangerous animals. When haesten approach the end of their life-cycle, their limbs drop off and they become a brain pod – their hatchlings fuse with it and thus gain a kind of racial memory from the brain pod, though variations do occur here, meaning that new haesten are not necessarily copies of their progenitors. As you could glean from that, the race is genderless and comes with a full racial write-up, one only missing the “Playing a haesten…” sidebar that the SFRPG core races feature. I love this race from a thematic point of view – it’s a really cool idea!

That being said, the rules presented for them are slightly less interesting than the concept deserves – the concept is great, the rules less so. Hence, my rating for this component will be 3.5 stars, rounded up.

This card introduces a concept I enjoy – the biofield, basically a connection of living things in the universe. With the Bioconnection feat, you can tap into this field. Once per day, after spending 10 minutes in joint meditation with a willing creature, you gain one of the creature’s feats for 24 hours. You do not need to meet prerequisites. This is problematic, courtesy of the final sentence. You could get feats based on class abilities or racial abilities, which would make no sense and for weird interactions. The prerequisites should be required to be met. The pattern seeker theme nets +1 Wisdom and reduces Life Science and Engineering DCs to identify creatures by 5; it also nets Sense Motive as a class skills. 6th level makes identifying creatures via mysticism easier and nets you +2 to Diplomacy versus identified creatures. 12th level also nets +2 to Intimidate versus identified creatures and a 1/day reroll of such a check. At 18th level, up to 2/day, after succeeding Diplomacy or Intimidate check versus a creature identified, you can spend 10 minutes in contemplation to regain 1 Resolve Point. Kudos: The ability specifies that this does NOT count as replenishing Stamina.

The card also contains 4 different spells: Calm emotions is a mystic level 2 spell and can make for a potent buff/debuff, as it automatically suppresses fear or confusion, as well as rages, morale bonuses – you get the idea of what this does. Enhance mind thrust is interesting, in that it comes in 5 iterations for the mystic and has no effect on its own – it represents a spell to enhance, you guessed it, mind thrust, with a pretty steep Mysticism check to use the enhancement more than twice. Drain biofield is a level 2 – 4 spell for both mystic and technomancer. This one basically acts as an upgradeable nonlethal mind thrust – at higher spell levels, you get to choose whether to inflict nonlethal or lethal damage. Biofield boost is a mystic level 1 – 3 spell, level 2 – 4 for the technomancer. This spell lets you temporarily suspend ability damage or drain – the level 1 version may be a bit strong here, but your mileage may vary.

All in all, a solid card, though not one that blew me away. 3.5 stars, rounded down.

The heart of this section would be the notion of boarding weapons, which reminded me of one of my favorite C-movies of all time, Star Crash. A boarding weapon managing to breech or clamp onto a hull successfully delivers its boarding teams. You roll on the critical damage effect table to determine the system affected by the boarding team, and on a success of the affected crew member’s check, the team is repelled. On a failure, we get one level of critical damage to the system in question. This is interesting in that it does bypass the Critical Threshold, which is a pretty potent thing – however, this is balanced by the rather massive BP-and PCU-costs: The most potent of these clock in at up to twice the PCU of a comparable weapon! 6 of these are provided, and they are all tracking weapons, though e.g. speed also represents a balancing factor. A security bay and drift boosters are provides as expansion bays. Cool: The latter is a one-use emergency drift engine, and once it burns out, its bys can serve as cargo bays. Lost in Space, anyone? There also is the repel boarders crew action, which may be undertaken during Engineering, Helm or Gunnery phases. I liked this. As a whole, the boarding rules do not necessarily mean/imply regular beings, more some sort of tech-style nanite/biogel-etc.-boarding, thus avoiding the huge cluster-f*** that this’d otherwise become; while the flavor does encapsulate teams, I’d strongly suggest making this type of boarding, well, tech-based. The abstraction of boarding team elimination can otherwise become weird for smaller ships. The section also provides two distinctly haesten ships, the tier 1 nursery pod, and the tier 9 nursery crèche.

This card is a strong offering. Some fun ideas here, and I like the ships taking the species’ peculiarities into account. 5 stars.

Here, we get two new critters, both coming with really neat full-color artworks: The CR 1 Haesten Hatchling, whose pincer attacks can cause lesser confusion (not properly italicized) as their attacks attempt to establish a bioelectric link. Killing them causes their bioelectricity to discharge. Now, haesten are introspective by requirement – knowing that, eventually, your legs will fall off and you’ll be subsumed by the next generation is pretty frightening. Some haesten can’t deal with it – these become the CR 3 rogue brain pods, studded with rather dangerous SPs and the ability to fire multiple energy rays, with a cooldown. These mad brain pods are the reason most nursery crèches don’t have an escape pod… Neat. Really like these.

Another strong card in the set. 4.5 stars, rounded up.

This adventure is intended for 4 – 5 2nd level PCs. The mini-adventure comes with a full-color map, though no player-friendly iteration is included. It also features both of the monsters – a shorthand of the monster-entries sans stories is provided. You can run this module sans access to the monsters-card, though it does lose its impact a bit. There is a formatting hiccup in one of the shorthand statblocks, but nothing grievous.

This being the section of system’s review that talks about the adventure included, the following contains SPOILERS. Players should jump ahead to the verdict/conclusion.

Only GMs around? Great! Soft Words on Wind, a haesten philosopher-poet, was approaching the end of their life-cycle; as such, they boarded their crèche, far from the Querritix system, preparing for the birth of the new generation of philosopher poets, who’d spread their beliefs to the stars. Unfortunately, Soft Words on Wind broke under the stress, sending forth a distress signal. As the PCs explore the little dungeon of sorts, they will encounter the deadly defenses of the rogue pod brain, as well as the hatchlings – in short, this is an introduction by witnessing it to the unique life-cycle of the race, and yes, traps, DCs etc. are sensible. Now, personally, I would have enjoyed an additional reward for successfully keeping all hatchlings alive, but that is just me nitpicking. The second card-page has a bit blank space: A creepy little dressing-table or small sequence tally would have filled the space and made it even nicer. Similarly, making the NPC BBEG a bit more unique re stats would have been nice.

All in all, this is a fun module, considering the limited space it had available. 4 stars.

Editing and formatting are good of a formal and rules-language perspective – I noticed a few guffaws, but nothing too serious. Layout adheres to a 2-column full-color standard and the artworks and cartography provided is nice. The complete set does features individual bookmarks for each card.

Michael Allen’s star system is a big step up when compared to the first star system set in the series. The set definitely benefits from a unified creative vision, and Michael Allen did something I did not expect. You see, I saw the Mi-go-ish artwork, rolled my eyes, and put this aside for a while. I shouldn’t have. The star system does present a truly interesting, alien race that feels profoundly strange. It’s what I want, race-wise, from SFRPG – not just x new humanoids, but strange species that feel new. The haesten’s lifecycle and its ramifications are definitely something I’d enjoy exploring as both a player and GM. Is the truth about it known? What if an enemy force hijacked their creches, seeking to spread fear of the race in a propaganda-war? There is quite a lot of potential here.

I liked this star system A LOT more than the previous one; my final verdict for the whole set will clock in at 4 stars. Definitely worth checking out if you’re looking for a truly different type of race!

You can get the full version of the Star System Set here on OBS!

You can get just the planet here!

Want just the race? You can find it here!

Only interested in the character options? You can find the pdf here!

The equipment card can be found here!

Only want the monsters? Those are here!

The mini-module’s stand-alone card can be found here!