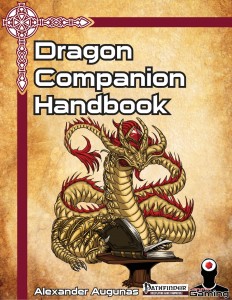 This pdf clocks in at 32 pages, 1 page front cover, 1 page editorial, 1 page SRD, leaving us with 33 pages of content, so let’s take a look, shall we?

So, this is another pdf that puts dragons in the hands of players. My dislike for this very concept is by now probably widely known, so rest assured that I am not a fan of the very concept this book is based. My first thought here was simply that I did not want to do the vast amounts of math – but hey, I guess I’m pretty much a pro regarding reviews, so I swallowed my own inclinations like a man and opened the pdf. On the first page, the pdf immediately alleviated my very first concern – overlap. Rogue Genius Games has provided the Dragonrider and Dracomancer base classes, Rite Publishing the option to play a dragon as a player-race with In the Company of Dragons – all of which are excellent products ad this pdf acknowledges this and does NOT try to wilder in their areas of expertise – plus, pointing them out to potential customers is a great example of 3pp-camraderie.

A quick glance at the pdf’s pages does show that the dragon race as used herein clocks in at 33 RP – and even though the RP-value from the ARG is anything but reliable, more than thrice the RP of humans should drive home the notion that yes, even small dragons are powerful and as presented herein, only should be used as PCs in the most high-powered of games.

So what, if not that, does this pdf cover? Well, dragon companions. Dragons as cohorts (including synergy with the glorious leadership handbook.). Dragons receive the following racial traits: +2 Str and Cha, 30 ft. speed, 30 ft. fly speed (average), start off as small, get darkvision and low-light vision, +2 natural armor and a bite and 2 claw attacks at 1d4 and 1d3, respectively. As a nitpick, I would have liked them to specify whether these are primary or secondary natural weapons – and yes, I am aware of the default-rulings here, but not having to look it up is always better than searching for the info. Breath weapons are either 60-ft. lines or 30 ft. cones and have a save DC of 10 + level + con-mod. Per default, the breath weapon can be used 1/day. Now why would dragons accompany those puny, squishy, scale-less murder hobos? Simple: Power-gain. The rationale is genius: Dragons doze all the time, slowly gaining power. The issue is that young dragons will have a hard to impossible time to defeat older dragons – so some opt to become “sleepless.” These dragons may scorn the traditions of their ancestors (thus coming with built-in reasons for dragons to try to take the PCs and their cohorts out…) and thus accompany e.g. PCs for power and protection. Dragons, as detailed here, are organized in septs, something chosen at 1st level.

Each sept modifies the racial traits – from subtypes to movement rate modification to the breath weapon and the additional qualities, these septs provide surprisingly well-balanced ability-modifications – Brass dragon septs get, for example fire immunity…but also cold vulnerability. And yes, I could break them down, sept by sept – but know what? That would bloat this review beyond compare. Why? Because they ALL are covered. Chromatics and metallics are obviously covered – but so are brine and cloud dragons, lunar dragons, magma dragons, time dragons, vortex dragons – honestly, I had forgotten about the existence of some of the more esoteric among these. Beyond these, favored class options, including the ACG-classes, the Occultist, the superb technician (from Age of Electrotech) and e.g. the mystic from Amora’s Liber Influxus Communis yes, an age, height and weight-table.

There also is a dragon racial paragon-class – which receives d12, 6+Int skills per level, no proficiencies beyond natural weapons (but do not take arcane spell failure when wearing light armor once you become proficient in it), all good saves, good BAB-progression, spontaneous sorc/wiz-spells via Cha of up to 4th level, natural armor +1 at 4th level, +1 at 9th, 13th and 18th level and, of course, attribute and size modifications throughout the levels obtained. Draconic powers not gained via the chosen sept are instead gained via the draconic heritage class feature at 1st, 3rd and every 6 levels thereafter. Frightful presence is its separate entity and need not be chosen. At 2nd level and every 3 levels thereafter, the draconic paragon also receives a bonus-feat, one to be chosen from those with the [dragon]-descriptor. Finally, the class receives scaling DR, blindsense etc. It should be noted that the heritages themselves can be approximately likened to bloodlines, orders etc. in that they offer bonus spells, modifications of abilities and linear ability-progressions over the levels – as well as a unique capstone for each heritage, often in the guise of very powerful SPs. And yes, unique effects can be found herein – the red dragon paragon for example, learns to melt stone at 15th level – with different effects when e.g. targeting the floor or the ceiling, potentially grounding e.g. flyers hit by the lava. And yes, the complex wordings such abilities require are delivered with the trademark, almost Zen ease I have come to enjoy from Alexander Augunas’ writing.

Want to know what’s even cooler? These heritages double as bloodlines for the purposes of qualifying for certain abilities, PRCs, feats, etc. – but only, obviously, for the draconic bloodline. As a drawback, a heritage locks you out of certain options – like non-dragon bloodlines. So this massive section covers the cohort option – but this is, after all, the COMPANION handbook – and as such, the handbook also provides a companion-like treatment – with level-based advancement stats for every one of the huge amount of dragons provided, including, of course, the massive 20-level table for your convenience’s sake. Now a handy table explaining subtypes is nice – a table that handles aging and even age regression and the effects on dragons? That is one-step-beyond level of care.

Now I have already talked about there being a significant array of (dragon)-feats to modify your draconic companion. Speaking of which – how do you get one? Easy, via a concisely defined feat that acts as a tax for the obviously superior power of a dragon companion over a non-dragon companion – and before you ask: Yes, the feat has a rank-based limit that prevents a character from achieving easy dragon-based flight at 1st level – as mentioned in the beginning, there are classes for that and sticking to its guns is pretty smart for the book, as it allows for a proper balancing that e.g. dragonrider etc. achieve via other means. Now, if you are playing e.g. a kobold or a dragon sans the paragon class and still want to benefit from a heritage, that s covered as well. Faster movement rates, breath weapons, camouflage – the feats are numerous and provide ample of choices. Wanna go dragons…in SPACE? There’s a feat for that. Petrifying foes dropped to 0 hp? Superb ambush predator tricks? Yup, all there.

editing and formatting are top-notch, I noticed no significant glitches apart from e.g. a Special-line not bolded and similar cosmetic hiccups – those are few and far in-between, though. Layout adheres to a beautiful two-column full-color standard and the pdf comes fully bookmarked for your convenience. The original pieces of art by Jacob Blackmon are beautiful, with especially the dragonrider battling cthulhoid creatures IN SPACE being fantastic.

Alexander Augunas’ Dragon Companion Handbook is one of those pdfs I dread – so much math, so many numbers. Making such a book must have been capital “W” work – and yet, this book breathes a very fresh and light spirit – surprisingly, this book feels very much easy to use, easy to grasp and balanced in an almost uncanny way. The companions herein work, mainly because they do not claim to be anything else – The dragonrider and dracomancer balanced the dragon via action economy; In the company of dragons did so via essentially radically redesigning the whole concept. Both succeeded in interesting ways. The Dragon Companion Handbook also succeeds in this endeavor by focusing on its design-goal. And yes, the book goes a step beyond and theoretically does allow for the full-blown super-high-power gameplay of these as characters, if that’s the campaign you are going for; heck, even for low-level games, the linear codification of draconic abilities may allow for a finer grained way of balancing draconic adversaries to make them viable adversaries when vanilla bestiary dragons would be too much; one could conceivably even use the rules herein to create dragon/class/race-hybrids for adversaries.

Let me state that flat-out – I can’t find fault with this book. For me, as a person, this book is 4 stars due to the reason that I just can’t get myself to like the very concept this book caters to – dragons, to me, are the big, bad movers and shakers, not the adventuring pets, no matter how good or organic the rationale may be. As a reviewer, though, I have to admit the elegance of the design herein, the smooth flow of…everything and of course, the fact that this book triumphantly succeeds at what it sets out to do, including taking the intangible, non-math benefits into account, which I elaborated upon in “In the Company of Dragons”‘s review. Which brings me to the point – the synergy is the final, shining star here, the last viable means of complaint I could have offered – and it is eliminated on the very first page. As a reviewer, I have to rate this 5 stars -and even if you’re like me and loathe the concept, the scavenging of mechanics still renders this an excellent purchase, well-worth of your hard-earned bucks.

You can get this great book here on OBS and here on d20pfsrd.com’s shop!