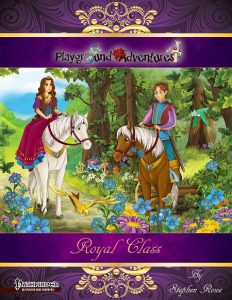 This class-supplement clocks in at 18 pages, 1 page front cover, 1 page editorial/ToC, 1 page SRD, leaving us with 15 pages of content, so let’s take a look!

Wait, before we do, let’s make one thing perfectly clear: This class was specifically designed with kids and new players in mind, which means that it won’t have the astounding customization depth of e.g. one of the offerings of Bradley Crouch or Alexander Augunas – it’s intended to work as a simple option and thus, I won’t fault it for its design, though I will comment on it if I should deem it appropriate.

The royal base class as presented herein gets d8 HD, 3/4 BAB-progression, good Will-saves, 6+Int skills per level and proficiency with simple and martial weapons as well as with light and medium armor and shields, but, as almost always, not with tower shields. Royals spontaneously cast divine spells of up to 6th level drawn from the cleric’s spell-list via Charisma as the governing attribute and do not require a divine focus to do so. Their spells are modified at 1st level with a crucial choice – of whether to be a blessed or cursed royal. Blessed royals add cure spells to their list of spells known, whereas cursed royals instead add the inflict spells. Additionally, and this is perhaps one of the most interesting features of this divide, blessed royals can cast good spells sans being good and cursed royals can cast evil spells – both without any repercussions to their alignment. You could e.g. pit an evil spells-casting cursed LG royal against a healing, despicable blessed oracle. This has some nice narrative potential.

Blessed oracles gain the Disney-Snow-White version of wild empathy and can influence non-carnivores or predators, while cursed royals can instead influence vermin and predatory animals and both may use the ability to influence magical beasts of alignments corresponding to their destiny (cursed or blessed) at a -4 penalty. They also gain channel energy at second level, increasing potency every even level thereafter, with the type of channel being, obviously, determined by the blessed or cursed destiny.

2nd level makes it easy to recognize the royal as a royal and nets the character +1/2 class level to Diplomacy and Intimidate and they treat settlements of primarily their type as +1 size for purposes of items etc. available. At 11th level, the class becomes immune to fear and at 17th, this immunity becomes an aura that extends to 10 ft. – interesting: As a standard action, the royal can extend this aura to 60 ft.

If the above did look as though there was something missing from the chassis of the class, you’d be right: The destiny chosen, whether it’s cursed or blessed, directly influences the royal and provides a somewhat order-like linear structure of abilities. For advanced kids and players or for those looking for more customization, the pdf does offer a suggestion for royals that get choices, which is a nice touch. The abilities thus gained are generally categorized as boons, with the blessed royal gaining the ability to support nearby allies with scaling bonuses to atk, AC, saves or skill checks, with higher levels allowing the royal to affect more allies and at greater range. 3rd level nets them +Cha-mod to Ref-saves, 9th a better starting attitude and faster Diplomacy and at 19th level, they can charm monster permanently those who are friendly to them…oh, I can see that being a chassis for a nasty villain…

Cursed villains may instead inflict penalties on adversaries, gain Cha-mod to Fort-saves, gain a fast Intimidate and count as larger for purposes of size and when they demoralize does at 19th level, the creature forevermore must save to avoid being shaken by his presence.

The pdf offers a couple of archetypes – the befriended replaces channel energy with an animal companion, using her royal level as her druid level, with the usual abilities gained at generally sensible levels. The Commander can expend move actions to grant himself bonuses to atk, AC and saves, with the bonus scaling and may grant this benefit to allies at higher levels, with 13th decreasing the activation action to swift…at least that’s what he gains if blessed. As a cursed royal, he gains the debuff equivalent. Additionally, they may elect to gain combat or teamwork feats instead of increasing their channel energy dice. Basically, this is a more martially competent character of a more tactician-y bent. The educated royal uses Int instead of Cha for casting and save DCs, gains 1/2 class level to Knowledge-checks instead of wild empathy and gains Int-mod to saves versus the extraordinary abilities of monsters correctly identified. 9th level provides the option to take 10 on Int-based skill-checks the royal has ranks in as well as 1/day take 20 as a standard action. 19th level provides eidetic memory via vision…sans fatigue.

The gifted royal replaces bonus spells from destiny with a bound object, gains Craft Wondrous Item at 2nd level (and 1/2 class level to Craft checks), with the royals gaining less costly crafting, while cursed royals can add curses to magic items crafted – instead of the linear progression of less costly crafting, the cursed royal gets something I actually haven’t seen before – an array of curse-themed abilities that allow them to actually craft and employ the less expensive cursed items in pretty unique ways, allowing a crafty group to work around the significantly less expensive cursed items.

The pdf also sports alternate destinies that do not fall into the good-blessed/evil-cursed dichotomy, though these alternate destinies do affect more than boons – they can basically be thought of as archetypes blended with destinies. Arcane royals obviously lose a bit on the proficiency-side, but they can cast spells in light armor sans incurring spell failure. Spell failure? Yep, they draw their spells from the sorc/wiz-list instead, with a select array of spells added depending on whether she is blessed or cursed. They also get +4 to saves against arcane spells at 11th level and extend this an aura as per the defaults of the base destinies. Boon-wise, they may, as an immediate action, reroll saves versus spells up to Cha-mod times per day, auto-identifies (!!!) spells at 9th level and may at 19th level, add metamagic feats to her spells sans increasing casting time and gets permanent greater arcane sight as an Ex. In play, this guy behaves pretty much like a magus-y-character with healing capacity and better spell selection.

The bewitched alternate destiny would be a twist on this, instead opting for the witch spell-list, once again modified bonus spells and later level immunity to charm spells and effects, with the aura, once again, extending this to allies. Similarly, the royal gains bonuses versus effects associated with witchcraft -curses and polymorph. 9th level provides a single hex, 19th a single major hex. I am a bit less impressed by this one – honestly, I think that more hexes would have made this one a bit more distinct – but this is just my own opinion and thus will not influence the final verdict.

The Elemental royal gets 4 suits of spells, depending on element chosen…and they should get a means to avoid toasting allies, for their channel energy instead channels elemental energy, which can wipe groups sans means to exclude targets. They get empathy with creatures of the corresponding elemental subtype and elemental immunity at higher levels that can be expanded with the aura. Boon-wise, stacking resistance, increased movement and calling forth elementals complement this one. The final alternate destiny would be faerie, which draws upon the druid spell list, with the high-level immunities being granted against spells and abilities of fey or that use plants and similarly, the boons provide bonuses to enchantment and illusion-saves, polymorph and finally, the class may inflict the blessed or cursed ability permanently – but for as long as this persists, the ability is locked for the royal…so choose wisely!

To help new players, the final page is devoted to a sample feat and spell array for blessed and cursed royals, ranging from level 1 – 20: Kudos for this!

Editing and formatting are very good – apart from one copy-paste remnant that read oracle instead of royal, I noticed no glitches. Layout is beautiful – with page borders and the space above and below in purple and gold, the pdf has a unique aesthetic identity that works well with the theme, one supplemented by the child-friendly illustrations in full color. The downside of this beauty, however, is that this drains quite a bit of ink/toner with its golden-purple boxes. The pdf comes fully bookmarked for your convenience.

Stephen Rowe’s royal class is interesting – on the one hand, the base set-up for the class is very beginner-friendly and accomplishes its goal rather well. So kudos for that!

On the second glance, the more complex alternate destinies are interesting and juggle some complex and rarely seen options – particularly the curse-item-crafting of the gifted archetype is rather ingenious and something almost never seen in mechanics, so kudos for that! Is this class something for you? Well, as a whole, I can attest that it does work rather well and in a generally balanced manner. Some caveats: If you’re playing a fey-heavy campaign, the faerie’s destiny becomes pretty OP and can wreck havoc with that. This is a situational issue, though, and does not necessarily apply to all campaigns.

Similarly, if you have expected Ultimate Campaign-support or kingdom-building tricks, you’ll be left out. The royal as presented herein is basically a take on the Prince Charming/Belle-style royal sans the burdens of lordship and its boons. So yes, this does manage to capture this component. Granted, the class does bill itself as the royal as featured in fairy tales – basically, as the heir apparent and not as a simulation of how royalty would work in a more realistic context, but I still think it to be rather necessary to emphasize this. Why? Because the class very much feels like a royal…and doesn’t. Reviewing this class pretty much felt weird to me: I consider this a perfect match for the royal – that royal we know from the Disney movies; at the same time, the class, to me, does not feel like a royal, since, with one ability as an exception, it does not really draw on royal tropes – lands; status; regalia; increased starting money; monthly gold-influx…if these things are what you’re looking for…then you won’t find them herein.

Okay, but how to rate this? The royal class itself is interesting, easy to grasp and not too hard to use…but frankly, I wished it had focused a bit more on doing something novel, even within the fairy-tale-royal context. Where is the beast form (as in Beauty and the Beast) for the cursed royal? The ability to break curses via kisses? Personally, I would have loved to see the class embrace the clichés we all grew up with, go full-blown into the tropes instead of using the channel mechanic. That being said, while the class does not hit this component at maximum efficiency, it still is a nice class that makes for a great offering for new players, with some unique and fun modifications for more seasoned players. Ultimately, I consider this a worthwhile addition to the class roster and well worth of a final verdict of 4 stars, with an explicit recommendation for groups looking for an “easy” class to use by less experienced players.

You can get this beginner-friendly base-class here on OBS and here on d20pfsrd.com’s shop!
Endzeitgeist out.