Slavers of the Sunken Garden 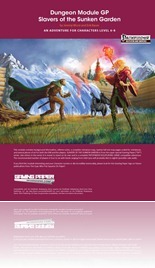 This module is 26 pages long, 1 page front cover, 3 pages editorial, 3 pages of advertisement and 1 page back cover, leaving 18 pages of content, so let’s check this out!

Still here? All right! The pdf kicks off with an overview-map of the complex before the module introduces us to the back-story of an archdruidess, an ancient nature spirit and a harnessing of essence gone horribly awry – and so the hidden valley of the druidess remained undiscovered for ages. Until representatives of a fiendish guild of slavers found the we–hidden vale and began the slaughter. When the PCs encounter the corpse of a satyr, they can track back the trail to the illusion-covered entrance to the vale, where an advanced basidrond will make for the first deadly challenge, coming with some nice sample hallucinations induced by its spores. Unfortunately, the guardian of the vale, a rather massive advanced wood golem will make for yet another deadly challenge.

Unfortunately, the pdf is not free from glitches, as e.g. Glenfinnian, sprite librarian, is missing from the stats and doesn’t mention using the standard sprite-stats. From here on, the PCs will have to act smart in order to defeat the savage slavers, for the module comes with alarm-response tactics and if they do well, they might actually not only deplete the ranks of their enemies, but also face down with the leaders of the enemy forces – a mighty druid as well as a half-fiendish, winged ape-like humanoid! The latter is a damn cool boss, not only for his ability to cause alarms, environmental hazards etc., but also for the fact that he’s actually an aerial combatant. If the PCs are successful in dealing with the slavers, they might not only have saved a the vale’s remaining fey, they will also have gained the friendship of the rare ebonwing pegasi by preventing the corruption of her offspring- great if you’re like me and plan to make extensive use of the upcoming “Companions of the Firmament”-book by Geek Industrial Complex.

Editing and formatting are good, though not perfect: I noticed things printed bold that shouldn’t be etc. Layout adheres to a printer-friendly 2-column b/w-standard with battles emphasized by symbols, somewhat similar to Adventureaweek.com‘s symbols. However, here, they have not been implemented to their logical conclusion and there only are combat and trap symbols, and not for all statblocks – which essentially take up space and make this adventure feel unfinished/rushed.

The b/w-artworks are sketches and the 3d-bird’s eye view illustration unfortunately is just as ugly as the majority of the sketchy interior illustrations. It should be noted that the module comes with a 20-page pdf that has battle-map-style pieces of maps to create the adventure while playing, which are compatible with the mega-dungeon – the cartography is awesome, btw. The pdf is fully bookmarked.

Originally released for Free RPG-day, Gaming Paper’s module provides us with some cool adversaries, an uncommon location, interesting environmental factors – what can go wrong? Short answer: A lot. Long answer: The artworks suck. Editing and formatting are not up to the standard of all their other releases. The bird’s eye-view is sloppily depicted. And then there’s the amount of content: 18 pages. Legendary Games provides us with short modules for 5 bucks, with original full-color artworks, stellar writing and drop-dead gorgeous artwork – this module is weaker in all regards. 0onegames’ “The Sinking” modules provide only slightly less content (or even more), for 2 bucks and actually most of them are better. This module costs 9 friggin’ bucks – for the pdf. Yes, the cartography is awesome, but honestly, that’s not even close to enough to justify the price-point, especially when you can get Citadel of Pain, a 100+-page module that is vastly superior in every way for just a buck more. Worse yet, this module was once intended as a Free RPG-release and handed out, and while other 3pps like JBE and LPJr Design give away the pdf-versions of their Free-RPG-day-offerings for free, this pdf has the audacity to cost 9 bucks.

If this module would in any way, whether regarding artwork or content, justify the price-point, I wouldn’t complain – I’m willing to pay major bucks for great content. I expected a cool, detailed module for the price-point and instead got a very short module that even surpasses Caragthax by TPK Games in brevity without having the class of Legendary Games. For 2 or 3 bucks, this module would be a 3-star file, but honestly, for 9 bucks you can have Ben McFarland’s full-color, Jonathan Roberts-cartographed, stellar, longer “Breaking of Forstor Nagar” – which btw. also has vastly superior full-color maps. Try as I might, this offering has no single component, no merit I can find that would justify its insane price-point. Buy “Citadel of Pain” and once you’ve gotten that, get “All-Stars take on the Mega-Dungeon”, but avoid this overpriced thing like the plague. My final verdict will be 1 star due to an inability to stand up to any of its competitors in any discipline.

Slavers of the Sunken Garden is available from: