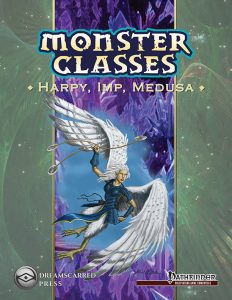 This installment of the Monster Classes-series clocks in at 13 pages, 1 page front cover, 1 page editorial, 1 page of SRD, leaving us with 10 pages of content, so let’s take a look!

We begin with the harpy base class, who receives +2 Str and Wis, -4 Int, are medium monstrous humanoids and a 20 ft. base speed. They have darkvision 60 ft. and a natural AC +1.

The racial paragon class covers 7 levels and receives d10 HD, 4 + Int skills per level, proficiency with light armor, morningstar and simple weapons, good BAB-progression and good Ref- and Will-saves. The class begins play with 1d4 damage inflicting talons (properly codified as a primary natural attack) that increase in potency to 1d6 at 4th level. 2nd level provides the gliding wings that increase in power to gain a fly speed of 60 ft. with average maneuverability, increasing the speed to 80 ft. at 7th level, with encumbrance/armor/etc. reducing the fly speed. Kudos for getting the flying progression right and universally balanced! 2nd level provides a +2 bonus to Bluff and Stealth, increasing that bonus to +4 at 5h level.

At 3rd level, the class learns the captivating song, with the DC governed by 1/2 HD and Cha-mod and a once/24 hours hex-caveat, with its reach beginning at a humble 10 ft., increasing that to 20 ft, at 4th level, then to 50 ft., 100 ft. and 300 ft. Attribute-gain-wise, the class nets +4 Dex and +6 Cha for a total of 10 gain…and guess what. While I would have loved less focus on Cha…I don’t have an issue with this monster class. I actually like it. Kudos!!

After that, imps would be up next: Imps receive +2 Dex and Int, are Tiny evil and lawful outsiders, have a slow speed, darkvision 60 ft., fire resistance 10 and immunity to poison. They also gain +1 natural AC. The monster class covers three levels and sports full BAB-progression, good Ref. and Will-saves, d10 HD, 6 + Int skills per level and proficiency with simple and martial weapons. At 1st level, the imp may assume beast shape I (not properly italicized) to assume raven or rat form, with 2nd level unlocking the shapes of a boar and giant spider. 1st level also nets cold and acid resistance 5 that increase to 10 at 3rd level. At first level, the imp receives a primary natural sting – as a nitpick, the racial traits list the reach of the tail as 5 ft., while the attack is a sting. As a Tiny creature, the imp very much needs the wings that grant a fly speed of 15 ft., increasing to 30 ft. and 50 ft. over the progression of the class. The SPs of the creature increase from 3/day detect good and detect magic to constants at higher levels, with 2nd level adding 1/day augury and at-will, self-only invisibility at 3rd level…which makes me really wish the class was a bit longer.2nd level nets see in darkness and 3rd level has DR 5/good or silver, fast healing and immunity to fire as well as poison.

Attribute-gain-wise, the imp receives +4 Dex, +2 Wis and +4 Cha, for a total net-gain of 10. The imp class, while suffering from the big Tiny drawback, feels like it could have used 2 levels more for a wider dispersal of options – with all jammed into 3 levels, it feels busy and the lack of a non-sting attack option with reach hurts and shoehorns the race in a role. Not perfect.

The third monster race herein is, surprise, the medusa, who is a monstrous humanoid with +2 Dex and Int, darkvision 60 ft. and +2 to Perception. The racial paragon class covers 8 levels and receives d10 HD, 4 + Int skills per level, proficiency with simple weapons +longbow and shortbow. The class gets full BAB-progression and good Fort-saves. The medusa begins play with one primary snake bite attack at 1d4, properly codified. 2nd level nets +1 natural armor, +1 at 5th and 8th level. 3rd level yields all-around vision and 4th level yields poison. 6th level provides the signature petrifying gaze that needs to be directed at a full-round action with a range of 30 ft., with 8th level constantly affecting all creatures within 30 ft. The save DC, in an example for a slight inconsistency in the series scales based on 1/2 class levels + Cha-mod, not using HD – I’m not complaining there, mind you; I think it’s smart to cap the DC there! Attribute-gain-wise, the medusa receives +2 Dex, +8 Con, +2 Wis, +4 Cha for a net-gain of 16 points. With which I am okay, particularly since the gain does not pertain the most abuse-prone stats.

Beyond these, the pdf contains several feats for better talon attacks, 1/week commune, better harpy-songs, etc. -a solid mix. As always, we conclude with a glossary of subtypes etc.

Editing and formatting are pretty good on a rules-language level, but on a formal level, there are a couple of series oversights – from excess bullet-points to layout being less easy to read regarding table-placement etc. and the missing italicizations, the pdf feels a bit rushed in that regard. Layout adheres to DSP’s solid two-column full-color standard and the pdf comes with solid full-color artworks. The pdf has no bookmarks, which constitutes a comfort detriment. The pdf does come with a second, more printer-friendly version.

Jeffrey Swank’s latest monster class-supplement is actually better than most; while usually, I have to look no further than the total of the attribute-bonuses to see problems, but here, the series actually presents two valid paragon classes that gain attributes, etc. – yes…but do that pretty well and balance the gains and ability-progressions versus one another. The imp is the weakest one of the options, still very much hampered by its size and the too tightly compressed ability gain; Still, this leaves me, for the most part, actually liking this pdf. Hence, my final verdict will clock in at 3.5 stars, rounded up for the purpose of this platform.