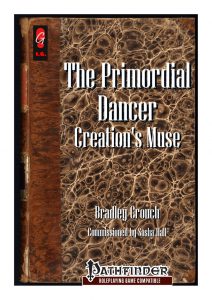 This base class, commissioned by Sasha Hall, clocks in at 26 pages,1 page front cover, 1 page editorial, 1 page SRD, leaving us with 23 pages of content, so let’s take a look!

Chassis-wise, the primordial dancer receives 3/4 BAB-progression, good Ref-saves, d8 HD, 4 + Int skills per level as well as proficiency with simple weapons and light armor. Primordial dancers wearing armors or shields in which they are not proficient cannot use dances. Primordial muses spontaneously cast divine spells of up to 6th level, with the spells drawn from the druid spell list. Her selection of spells increases to up to 6th level.

The central class feature of the primordial dancer would be, surprise, the dance – a dance is activated as a move action and may be maintained as a free action. A given dance has one passive, always-on bonus while it is maintained. While a dance is activated, the primordial dancer may activate one of a dance’s active abilities. Dance abilities generally are considered to be supernatural, unless otherwise noted. Each individual dance may be performed for a number of rounds per day equal to 3 + Charisma modifier. Each level beyond first, each dance’s total number of daily rounds by +1- The primordial dancer begins play with 2 dances and learns an additional dance at 2nd and 3rd level as well as every 3 levels beyond that. Dances also have subtypes, rewarding specializations – for each dance of a particular subtype beyond the first, all dances with that subtype can be used an additional round per day.

Active abilities of a given dance consume between 0 and 4 rounds of that dance’s allotment and the second and third active ability of dances are unlocked at 6th and 12th level, respectively. In order to activate such an active ability, the character must have a Charisma score of 10 + 1/2 class level required to activate that ability. DCs are equal to 10 + class level + Cha-mod – which means that they are HARD to resist. Replenishing the daily contingent requires 8 hours of rest plus 1 hour of practicing steps to get in the flow.

Starting at 4th level, the primordial dancer may 1/day activate two active abilities in a single action, with the activation using the longer of the two activation actions – nice: They have been listed for your convenience. 9th level and every 5 levels thereafter yield an additional activation of this ability in a given day. 8th level yields evasion, 17th improved evasion and as a capstone, the class looks at the subtypes of dances chosen: The most subtypes chosen determine the favored dance subtype, with ties allowing the player to choose. The primordial dancer receives a primal pool, which consists of the total of Int-, Wis-, and Cha-mod. This pool’s points may be used instead of the dance’s daily activation cost. The class has a catch-all favored class bonus, namely +1 round of activation for a chosen dance.

2 archetypes are included, the first of them being the primalist, who begins play with only one dance, and may not learn rhythm of life. The daily duration of all dances, however, is increased by +1 round. However, when preparing dances on a given day, the primalist may choose a Small elemental of the 4 basic types, behaving as though it was a summoned creature without actually counting as one. 5th level unlocks Medium elementals, 9th Large ones, 13th level Huge ones and 17th level provides elder elementals. Instead of the quicker activation at 4th level, the archetype gains dancing elements at 5th level – an element created by the primordial dancer is taught a single dance, behaving as though it had 1/2 its master’s class level, with 3 daily rounds. Primordial dancers may not activate a dance while the elemental is performing it and vice versa. 9th level and every 4 levels thereafter increase the elemental’s dance by +2 rounds. Solid pet option.

The second archetype, the weaver, associates energy types with all subtypes of primordial dance subtypes: Cosmos is assigned to sonic damage, life to positive/negative energy, sky to electricity…you get the idea. Starting at 5th level, while dancing, the weaver may expend 2 daily rounds of a known dance as a standard action, rewriting the an extraordinary or supernatural abilities of a willing creature within 60 ft.: Resistances, immunities, damage etc. of the creature’s ability are replaced with those assigned to the dance’s subtype. Starting at 9th level, unwilling creatures may be affected, with a Will-save to negate – I assume the DC here to be the dance’s DC, but I’m not 100% sure. 13th level may also target ongoing spells, which is REALLY versatile and cool, with 17th level allowing the dancer to spontaneously expend 2 rounds of a dance while casting spells to modify the spell’s parameters to conform to the energy of the dance. Positive or negative energy cannot heal via this ability. Once again, this replaces 4th level’s dual activation ability. I really like this archetype’s complex ability – I think it most certainly could carry more than it does here and even act as a base class chassis. Nice one.

A total of 13 feats is included in the deal and goes beyond the expected extra dance array and increased dance DC. There are quite a few feats that build upon the unique effects of the respective dances. In fact, the feats are entwined with the dances and interact with them thematically: Caterwauling Dance-Magic, for example, nets you lesser confusion as a bonus spell known, continuing the theme of the dance. Other feats penalize, as an example, the AC of a target, whose ray you reflect back on them via a dance. One of the dances creates an iceberg, which you can pilot – with the proper feat, you may pilot it even when not dancing anymore.

Now, it should be obvious at this point that the dances themselves are the central heart and soul of this class, with the first being absolute zero. This dance nets you immunity to supernatural and magical fatigue while dancing, with higher levels providing downgrades of exhaustion to fatigue and immunities. The active abilities provide a bonus cold damage with a short-term fatigue. Higher-level abilities allow for the temporary halving of all nonlethal damage incurred by allies nearby, with the 12th level option providing a fire-damage halving effect (properly codified with hardness, resistance, etc.) as well as a defensive shield of retributive cold.

Other dance passive abilities include growing clouds of obscuring mist, fire resistance and increased damage output for fire spells and dance effects, fast healing, swim speed, a modified, sonic-damage-causing flare and the like. There are, however, also more complex dances: Explorer’s Lament nets you a saline point pool equal to class level + Cha-mod; while performing the dance, you may expend a number of these points equal to a penalty to AC to negate the penalty…and upon negating the penalty thus, you become immune to this specific penalty’s source for the duration of the dance, which is really cool. Higher levels also allow for the temporary auto-granting of acid immunity, and at 12th level, botching foes can allow you to regain saline points. Those are only the dance’s passive benefits, mind you!

I already mentioned active benefits like the hard terrain control iceberg/floe-generation, and hailstorms etc. can also be found among the tricks the class offers; negative levels for foes (capped to prevent cheesing), temporary access to healing while in the proper dance, with a point-based casting mechanic supported by the dance…quite an assortment of interesting tricks. Heck, even the classic elemental options provide their benefits in relatively interesting ways. Self-granting quasi true strikes at range, quicker movement or better standing one’s ground – the dances can yield a rather diverse array of different playstyles/switches between them. The visuals are also cool: I mean, who did not want to dance through foes, hurling meteors at them, only to burst in a sudden, nova-like flare when foes get too close? There also would be a flight option that allows the dancer with an engine-tweak to maintain its effects for longer, which is pretty nice.

Where things REALLY get interesting as far as I’m concerned, would be with tangos – these are a bit more complex and allow you to determine an ally within 30 ft. – when you activate one of the active abilities of a given tango, the chosen tango partner also receives the benefits. These include bonus speed boosts for allies, sharing in your mental skill capabilities, reflexive shields that can render targets prone or environmental adaptation. (As a nitpick: Spell-references here are not italicized.) Also cool: Draw a line from you to the partner, cause damage in between. There are some highly tactical and rewarding options to be found here and I frankly wished we got even more of them!

Editing and formatting are very good on both a formal and a rules-level – I noticed no serious glitches. Layout adheres to Interjection Games’ elegant, no-frills b/w-2-column- standard and the pdf’s artworks are mostly swirlies, fractals and the like. The pdf comes bookmarked for your convenience.

Bradley Crouch is a damn good designer; I’ll stand by that statement any day of the week. The primordial dancer is an interesting class, somewhat akin to a druidic bard or alchemist. Why? Because the flexibility is closer to the latter than the former. Whereas bards tend to have a ton of bardic performance rounds, primordial dancers really have to be careful in their use of dances to not run out of one dance’s array of rounds. This also means that the signature ability of the class forces you to alternate between dances and thus prevents spamming the same trick over and over. The spellcasting adds further flexibility to the playing experience. Now, after testing these guys, I have a couple of observations: a) Dances are awesome. b) You never have enough dances. Yes, you can use FCOs and feats to expand your uses, but the central class feature can only be part of the experience; you can’t exclusively rely on them; you need the spells. Now, and this is only a personal preference and will not influence the verdict, but I would have loved to see the class focus a bit more on the dances…but then again, that may just be me and should be taken as a testament of how cool they are. The primordial dancer plays smoothly, is VERY easy to grasp as far as Interjection games-classes are concerned and proves to be a fun addition to the class roster. Can we have more tangos now? Kidding aside, the tangos can be rather rewarding for all concerned, much like their real life counterparts….but I digress.

You can get this unique, amazing class here on OBS!

You can directly support Interjection Games here on patreon! (This is also where this class was commissioned, btw.!)
Endzeitgeist out.