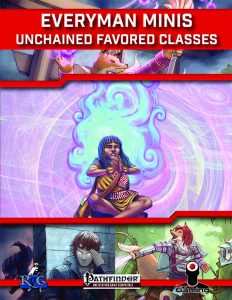 This Everyman Mini clocks in at 9 pages, 1 page front cover, 1 page editorial, 1 page advertisement, 3 pages of SRD, leaving us with 3 pages of content, so let’s take a look!

After a brief introduction, we begin immediately with the expansion of the matter at hand. To explain: This pdf builds on the Unchained Favored Class Options premiered in Everyman Unchained: Skills and Options. The system knows 4 types of bonuses: Class, companion, race and universal, and this supplement focuses on two of them: Classes and Races. As an aside, the explanation text here features two uncommon and autocorrect-style typos à la strictly/sticky and the like. Nothing grievous, but yeah.

Now, as you probably know if you’ve read my articles on my hopes for PF Playtest/PF 2.0, then you’re familiar with my issues with favored class options. To claim that I am not a fan of them would be an understatement. They are small min-maxing thingies that don’t really contribute in 90% of cases to how a character develops, at least not in a meaningful way. They are also painfully linear.

Everyman Unchained: Skills and Options remedied the linearity angle, which is one of the reasons I really enjoyed that book. Each class gets a whole array of general favored class options, and this pdf provides basically the catch-up expansion for the system: The Occult Adventures classes plus Vigilante and Shifter get their own unchained skill options within.

To give you an example: Mesmerists can choose one spell known at a spell level of their highest spell level known -1, +1/5 to the HD limit of the total number of HD affected with illusions or enchantments; +1/3 mesmerist tricks; +1/2 painful stare for mesmerist, +1/4 for allies or add +1/2 to 2 class skills. Sure, these are favored class options. They do not rock the world of classes. But they offer something vanilla favored class options don’t: Meaningful choice. This alone makes this selection worth contemplating.

Now, beyond the class catch-up, we also have new racial favored class options; 2 are provided per race, and we cover: Astomoi, Caligni, ganzi, monkey goblins, munavri, naiad, orang-pendak, reptoid, rougarou, shabti, skinwalker, vine leshy and yaddithian. +1/6 to one of two ability scores; expanded racial telepathy by specific type of creature with a language; additional +1/3 racial ability uses – once more, we have actually meaningful choices here. I like that. And yes, there are some hard limits imposed on how often you can take some to prevent power-gaming.

Editing and formatting on a formal level are very good apart from aforementioned minor hiccups. On a rules-language level, this is top-notch. Layout adheres to the artwork-bordered, new 2-column full-color style of Everyman Minis and the pdf has a nice artwork. The pdf has no bookmarks, but needs none at this length.

Okay, this one is easy: Alexander Augunas’ expanded unchained favored class options are contingent on one thing only: Do you use Everyman Unchained: Skills and Options? Or do you *want* to use it, but haven’t so far due to the lack of occult/vigilante/shifter support? Then this pdf is a must-own file that you definitely NEED. If you are not interested in the revised favored class option system presented in the parent book, then you won’t be interested in this either.

That being said, as an expansion to the excellent parent book, this does succeed at its task and is well worth 5 stars + seal of approval.

You can get Everyman Unchained: Skills and Options here on OBS!