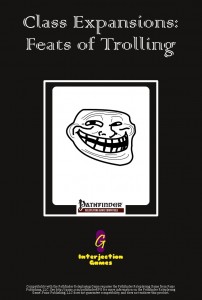 This installment of the Class Expansion-series is 4 pages long, 1 page front cover, 1 page SRD, leaving us with 2 pages of content, so let’s take a look!

So…feats inspired by internet-memes? Well, why not! Let’s check them out:

-Black Cat Effect: When ANY character falls prone within 30 ft. of you, the target gets 1d6 damage. Does not stack. Nice – especially for Malefactors!

-Clean Getaway: 1/day move 1/2 movement rate after the steal maneuver without incurring AoOs. May be taken multiple times for +1 round, but used only 1/round. This one’s a bit weak for my tastes.

-Disruptive Interjection: When someone makes a social skill check (bluff, intimidate, diplomacy), make an opposed skill-check with the respective skill – if you win, you reduce the result by -2 or -4.

-Embarrassing Critical: When criting foes, forego additional damage to cut clothes to shreds and make the target entangled and provoke AoOs with every movement, even 5-foot steps until the target steps out of e.g. pants as a standard action. Each foe can only be affected once by the feat before the clothes are ruined too much to pull the same trick off twice and the pdf now specifies that the ability does not work on animals etc. – i.e. creatures sans clothing etc. to potentially impede them.

-Forever Alone: 2/day as a standard action, intimidate foes: Upon successful intimidation, your foe can’t use teamwork feats for one round. If you surpass the DC by 5 or more , you increase the duration by +1 round. Nice one!

-Hot Potato: 1/day “return” an item that explodes or activates when touched by someone not the creator like alchemist’s bombs. The item does not explode or deactivate when you catch it and bombs thus returned deal half damage. While the feat now is more precise than in the pdf’s first iteration and based upon the snatch arrow feat, personally, I would have prefered to have again spelled out that this attack is not an AoO, but that’s a cosmetic gripe.

-Raptor Strike: As a standard action, make a single AoO-provoking attack that deals +2d6 fire damage and causes the victim to fall prone if failing an acrobatics-check. If not prone, the creature gets a second AoO. Problematic: First: Falling prone in combat is tied to CMD in PFRPG, not acrobatics. A weird design-choice in this revised edition: The AoOs don’t count against a creature’s usual allotment of AoOs per round. Imho, the pdf should also specify that creatures usually unable to execute multiple AoOs per round can execute 2 via raptor strike, as it’s an exception to the standard rules.

-Mocking Dance: Cha-mod/day as a standard action make a mocking dance that upon a failed will-save, forces a foe to attack you, but at +2 to atk. Nice one.

-Slapstick: When a creature misses you with an AoO, it provokes an AoO – and vice versa! High dex/AC-combatants can abuse the hell out of this feat – I wouldn’t allow it in spite of its double-edged nature, though the revision has nerfed it to only work for the respective combatants, i.e. no more general AoO-provoking.

-Squirrel Logic: 1/day as a reaction to you provoking an AoO with movement, you can make a 5-foot step away from the threatening creature, potentially evading the AoO. And in the revised edition, this feats actually comes with all necessary information to make valid use of it – taking charge etc. into account! Two thumbs up!

-Sucker Punch: Deal unarmed damage when feinting – per se nice, but becomes VERY powerful in the hands of monks – too powerful for my tastes.

-Utterly Confuse: 1/day as a standard action bluff foes to temporarily confuse them. Nothing to complain here.

-Well, actually…: As disruptive interjection, only for knowledge skill checks.

-Wizard Duelist: Completely changed – now, when you identify a spell via spellcraft, you gain +2 to saves versus that caster’s version of the spell. When not allowing a save, you instead get resistance 5 versus the damage type, even if the type usually does not feature resistances like slashing, bludgeoning etc. – actually, this revision makes the feat work much better and is interesting.

Editing and formatting per se are top-notch, I didn’t notice any significant glitches. Layout adheres to Interjection Games’ 2-column b/w-standard and the pdf comes sans bookmarks, but needs none at this length.

This revised edition of “Feats of Trolling” cleans up many of the gripes I has with the original edition – now, most of the feats work as intended and while a couple don’t work as smoothly in a rules-context (still not a fan of Raptor Strike’s acrobatics vs. being tripped) and while e.g. the revision of sucker punch is imho a tad bit too powerful in the hands of monks, e.g. the revision of Wizard Duelist and Squirrel Logic now make these feats fun. Hence, my final verdict will be upgraded to 3.5 stars, upgraded to 4 for the purpose of this platform due to the fair price-point.

You can check this pdf out at OBS here and on d20pfsrd.com’s store here.