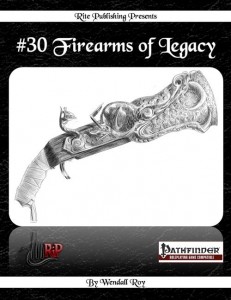 This supplement is 33 pages long, 1 page front cover, 1 page SRD, 2 pages of advertisement, leaving us with 28 pages of content, so let’s take a look, shall we?

In case you’ve spent the last couple of years under a rock (or are new to the world of 3pps), I’ll answer your question – what are legendary/legacy items? Pioneered by Purple Duck Games for Pathfinder, these items essentially are one of the ways to combat the Christmas-tree syndrome – essentially, legendary weapons/armor/items not only come with a story, but actually increase in power over the levels – though they may require basic prerequisites, which in this case are unanimously monetary investments to unlock more of the weapon’s powers. The latter are not in here, though – none of these weapons require skills, feats etc. – probably since firearms are already not too easy to handle. The true power of these items is also hinted at by omens that point towards there being more than meets the eye. The stories of the respective items can be unearthed via lore-sections that feature knowledge DCs to unearth the truth behind them. Unlike other takes on magic items that level like legendary items, these firearms come with 5 progressions each – new abilities are unlocked at 3rd, 6th, 9th,12th and 15th level. It should also be noted, that unlike 3.5’s Weapons of Legacy, neither Legendary Items, nor these firearms come with drawbacks – and if by now it’s not readily apparent, while this supplement doesn’t stick to the letter of PDG’s Legendary Weapon-formula, the weapons herein still are closer to legendary weapons than to legacy weapons, in spite of the nomenclature. To sum it up – they have less progression, but don’t require specific sets of feats/skills and items to use.

All right: Framed by an inventory list resulting from a break-in in an armory in Questhaven, we are introduced to a vast array of firearms – the one category of weapons not represented at all in the legendary department so far – so let’s take a look: The first firearm is called Aegisbane (or the Knight Slayer) and once belonged into the taloned hands of a stonewarden gargoyle mercenary – here you’ll probably notice that the lore-sections not only take RiP’s rich oeuvre of races and content into account, but also provide tantalizing snippets on the upcoming Questhaven setting. And no, to ease your concerns – you don’t need these additional supplements to properly use this pdf, tough for those familiar with RiP’s lore there’ll be some interesting pieces of trivia herein. Beyond the fluff, said sample weapon starts counting as +1 at 3rd level and penetrates armor at a longer range – so far, so nice. At 6th level, it starts to also damage armors and shields (and even degrade natural armor!). If a creature is providing soft cover. fret not at 9th level, for you can shoot both targets with one bullet. At 12th level, armor destroyed by the weapon starts damaging its wearer and at 15th level fire a devastating supersonic shot 1/day. Each of these items also comes with its own signature way of being destroyed.

Another example would be a firearm that lets you fire cursed bullets at foes – sympathetic wounds, bullet attraction – all kinds of nastiness. Or the Crimson Lady’s Fingers, a musket with extra barrels in an extra-dimensional space that can be changed via a move action and even faster when unlocking the weapon’s additional powers. There is also a musket that can transform into tools, a silced assassin’s pistol – or what about a weapon that can turn into an indestructible (but almost impossible to destroy and unable to attack) mechanical hawk and allows its user to access the collective knowledge of nearby avians as per commune with nature? If you’re rather nasty/anti-hero, why not take up Grinder, a demonic blunderbuss that can be used as a melee weapon – it tries to eat its foes! Wizards aren’t left out either, with a culverin that weighs only 10 lbs and comes with some ncie supplementing powers, whereas the weapon Null is all about countering magic – or perhaps you hate the undead – may I then suggest taking a look at the Maxie’s Crypt Broom blunderbuss (which has its header not properly colored)? Are you a fan of gun-fu? Well, the pistol Sunset blends monk and gunslinger, allowing you to influence some ki abilities with grit and vice versa in interesting manners. At 9th level, said pistol gets an ability that could have used a tighter wording:

“As a full-round action, you

can make a ranged attack with the weapon using your

Wisdom modifier instead of his Dexterity modifier on

the attack roll. This attack ignores the AC bonus granted

to targets by anything less than total cover and the miss

chance granted to targets by anything less than total

So…does this mean it ignores the AC-bonus from regular concealment etc. – or ALL AC-bonuses, e.g. from armor, dex etc.? For as written, one could assume the latter, which would be terribly overpowered.

Item-class wise, we also get e.g. pepperboxes, a doubloe hackbut and e.g. a weapon that can fire alchemical substances instead of regular ammunition – though again, clarification would have been required there: The weapon can shoot all alchemical substances that are in flasks – okay, but does that mean that an alchemist could fire extracts, mutagens and the like? What about bombs? And if you think I’m nitpicky about bombs not coming in flasks, think of nitroglycerin… Plus, I actually had an alchemist who had glass-bombs as a fluff distinction in my game – he was a glassblower. (Kudos if you know the legend of the Venetian Glassblower that inspired this build!)

Editing and formatting are good, though not perfect – I noticed some minor typo-level glitches, an incorrectly formatted header – you know the type. Layout adheres t RiP’s two-column full color standard and the 6 original pieces of gorgeous b/w-artwork depicting weapons by Ian Greenlee and Maxime Beaulac are glorious – I wished there were more, but for the price-point, I got more in that department than I expected. Neat! The pdf comes fully bookmarked, though the bookmarks also suffer from some minor typos.

I have to say… I don’t get why this pdf uses the legacy format. I’m aware that RiP has been doing leveling items this way, but with e.g. Dreamscarred Press, Kobold Press etc. by now using Purple Duck Games’ formula for Legendary Items, it feels like a bit contrarian to an already established system. I won’t hold that against the pdf, though. What I do hold against it, is the sentence “If the proper creature attends this legacy item, it feels a sense of “rightness” and it…” – this sentence is repeated IN EVERY DAMN FRIGGIN’ ENTRY OF AN OMEN. Yes, every firearm features this sentence – even those that belonged to insane boogeyman-assassins and those that were forged in the ABYSS provide a sense of “rightness” – WHAT? That’s just cut-copy-pasting of the laziest sort and repetitive. If you don’t want to write Omens, don’t include them in the first place. The Omens, which should be a cool peculiarity of each item thus imho drag down the respective entries instead of alleviating them and pointing out their uniqueness – the sheer laziness of the writing of the omens really detracts from each item’s appeal and clashes with their per se cool stories and lore-sections. Speaking of Lore-sections – why does every item, no matter how infamous or obscure, have a DC of 15 for their respective knowledge skills? A bit more variation would have been nice here – after all, the variation in weapon-classes is there.

Now I don’t want to give the wrong impression: Author Wendall Roy has created an intriguing array of firearms with some nice abilities to match – and these abilities really deserve accolades, though here and there minor wording incongruities can be found. What slightly irks me, though, is that the firearms unanimously remain at +1. Yep, no upgrades to +2, +3 and the like. While PFRPG got rid of the requirement to penetrate many DRs, it still feels wrong to me to have a level 15 character still waving a +1 weapon around – no matter how unique the enchantments of the weapons are. Speaking of enchantments – some of the firearms herein have glorious enchantments that don’t necessarily feel like unique abilities – and getting them as special qualities to add to your own weapons would have been nice – extra-dimensional barrels for example, at least to me, scream – “serialize this, make it an available quality!”

This pdf is not bad by any way and there is a lot of great ideas herein and the items per se brim with imagination – but ultimately, at least for me, this pdf feels like it was rushed and like it had lost its steam at the point in the design-process where the “little things” are addressed: Like the Omens, the DCs, the weapon qualities. You know, the additional tidbits that make files stand out. In fact, this pdf, with all its great ideas, falls short of my expectations (and I was looking very much forward to reading it) not due to serious gripes, but due to omissions and wasted chances. This could have been one stellar supplement – it still could, but as presented, it is instead is bogged down by the accumulation of aforementioned issues. My final verdict, hence, will clock in at 3.5 stars, rounded down to 3 for the purpose of this platform, though you still should imho give this pdf a look when designing new firearms or looking for some cool rewards for your group’s gunslinger or black-powder aficionados.

You can get this collection of firearms here on OBS and here on d20pfsrd.com’s store!