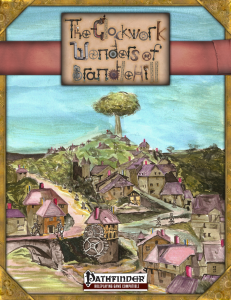 This module is 37 pages long, 1 page front cover, 1 page editorial, 1 page ToC/module summary and 2 pages of SRD, leaving us with 32 pages of content, so let’s take a look!

Still here? All right! The PCs are recruited by a weird gnomish bard called Terrence Threncewell on behalf of a weird little gnomish settlement called Brandlehill, which is well-known for its weird clockwork contraptions. It should be noted that DM’s who have an issue with fluff get a LOT of very detailed exposition – almost 3 pages are devoted to the recruitment of the PCs before they meet the Dwarven trademaster of the town, one Orin Hardtack who wants a grippli-town removed. Grippli-town? Yes, for Brandlehill’s clockwork wonders are reliant on rare swamp herbs from the Zeranoth swamp and aforementioned grippli-tribe has mostly become hostile due to as of yet undetermined reasons.

The grippli waste not much time an attack soon – in numbers and the PCs will have to slug through quite a massive bunch of these froggy fighters -including the fact that the humanoids will try to flank the PCs en masse. The fluff also mentions a healing-impeding paste, though that one does not feature in the stats – an unfortunate disjoint between fluff and crunch here. Still, the revised edition has greatly enhanced this encounter in particular – providing a gorgeous full-color map with several terrain peculiarities to use while battling – Neat! Also, in the fluff, the PCs get hints now about somehing not being quite right with the grippli…

Ralka escorts the PCs to the village – where they will have the chance to realize that the water-supply of the grippli has been tainted – probably by the ambitious former apprentice. The grippli are rather unhelpful and seek to drive the PCs out of town. Sneaking the tainted leaves out of town via stealth is now also covered, as is the (rather brutal) option of killing all the grippli.

But who is truly behind the taint? How can the PCs make themselves be heard and prevent further escalation? Well, if they’ve done their research and talked with Ralka, they can find the remains of a fallen half-orc ranger, who not only returns as a ghost, but also suffered from a demonic disease. They may also find the reason why the ranger was slain in the guise of the mirrored spear, an uncommon magical weapon I covered in my review of the FREE supplement by Mike Myler. It should also be noted that the complex where the deceased orc now rests comes with an extra-DM-map that makes running this mini-dungeon much easier – as you now know where things actually are supposed to be!

With the proof, they can expose the apprentice upon a return to the grippli-village – where their welcome will be rather hostile and more deaths may be the result – but so is now the option to use diplomacy – again, definitely an improvement over the original module.

The corrupt apprentice behind the taint, though, has fled to the Harhoa Cave, where he makes a final stand with a demonic frog, guarded by grisly trophies and traps. Upon dealing with the evil-doers, the PCs may return to Brandlehill to choose one of 3 clockwork wonders. The first, a grapple launcher, is a ranged weapon that hits foes with grab and damage as well as having the potential to halt falls – unfortunately rather overpowered. The second, a triple-shot crossbow now works better, though still not perfectly streamlined, whereas the third, which provides bardic performances in a box, actually is interesting – though ALL items don’t get proper item statblocks – and while they now do come with a price, the fail to specify with which craft-skill they can be created, which imho is a minor bummer. Also: Weirdly, neither the grapple-launcher nor the triple crossbow have a weight-score, whereas the box has.

The magic item, Cyrkssi’s Mirror Spear unfathomably follows the proper formatting, as does the magical Troll Wig-net. The pdf also features all the stats for the characters featured herein – now much easier to read. The final five pages are devoted to neat maps of beautiful full-color maps with grids.

Editing and formatting in the revised version of this module, while not perfect, are very good and lack any truly detrimental guffaws. The battle-maps provided are beautiful and the added maps greatly help running the combats. Furthermore, the pdf now comes properly bookmarked in both versions (the second being more printer-friendly) and while the artwork is not particularly glorious, it’s original and the GORGEOUS maps (and amount of maps) help offset this minor gripe. Most importantly: The Layout has been changed to a mostly 2-column standard that is much easier to read and overall is a vast improvement over its original iteration.

Here, I complained in my original review about several beginner’s mistakes – and I’m happy to tell you that most of them actually have been purged, greatly enhancing the overall appeal of the module and adding more than a bit excitement and options to the battles – and there is the railroad factor, which has been greatly diminished, offering a multitude of solutions and allowing for actual choice on behalf of the PCs. More crucially, the obscure original solution is much better foreshadowed and can be solved in ways that feel less arbitrary, less dependent on one obscure option.

While the module’s alternate resolution, including a full-blown annihilation of a settlement is introduced, it is still not properly followed up on and essentially remains an alibi alternative when it could have been a thoroughly compelling second finale with a bitter-sweet aftertaste. The clockwork wonders imho are still not perfectly balanced, but at least slightly improved. One substance is never given stats though the players should by all means also be afflicted by it – and since it impedes magical healing, the players WILL WANT it.

This module has potential – its locales and characters are colorful, its ideas are not bad and in the revised version, it actually managed to live up to its at times funny, even grotesque humor and its uncommon premise, solving many of the issues that once plagued it and rendering it an actually enjoyable experience. While not perfect, it is vastly improved and if this is the pace by which author Mike Myler intends to improve his offerings, then I’m looking forward to the things to come. My final verdict for the revised edition will clock in at 4 stars and a recommendation for aficionados of weirdness…and of course tinkering gnomes and grippli!

You can get this vastly improved revised edition here on OBS!