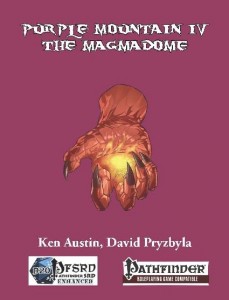 Still here? All right! Level 4 of Purple Mountain is a hostile environment – but unlike any fire-level you’d expect. Yes, there is magma. There are efreets and magma elementals (with class levels and archetypes!) – but the level has a massive catch that immediately stands out among comparable fire-themed dungeons: As soon as the PCs enter the level, they’ll get an invitation (also as a player’s handout!) that invites them to a kind of ceremony/game – throughout the level, scrying disks are located at numerous locations that serve as a focus for the elemental audience to survey PC-progress – and the progress of the other combatants that scour the dungeon’s level, actively hunting for the PCs: Think of it as a kind of extraplanar reality TV-show akin to Running Man, intended to choose a second in command for the elemental warlord Scorcher. And yes, the monster-choice is rather interesting and not limited to the standard elemental creatures you’d expect.

What really rocks, though, is that apart from a significant amount of different comments to spring on the PCs (or give warnings to them or their foes!), terrain-peculiarities abound and should make sure that interesting areas add their spice to your battles. Most of the level requires care while navigating and if you stop, you risk slowly sinking into magma, taking increasingly painful amounts of damage – two thumbs up for the great execution there!

Unlike regular dungeons, stealthily taking the dungeon room by room is hard to pull off, with scrying disks making resting VERY difficult and announcers, at the DM’s discretion, ratting out both the PCs and their foes, resulting in a surprisingly action-packed, intriguing set-up for the level – one that will actually feel distinct and different! Speaking of which, just to give you an example – what about a magma elemental martial artist monk, ever seen something like that before? Yeah, that’s exactly what I meant with “interesting builds”! We also get a neat new monster, the firewisp, and collected stats of all the monsters.

The appendices feature 7 uncommon spells, a write-up of elemental lords, a full write up of the religion of elemental god Drothos, the Magma Exarch and neat tables that display all the treasure to be found and all the XP to be gotten on the level, as well as a player friendly version of the map and high-res jpgs with and without labels for use with VTTs.

Editing and formatting are top-notch, I didn’t notice any glitches. Layout adheres to PDG’s relatively printer-friendly 2-column standard and the full color original pieces of artworks are surprisingly well-made – neat indeed! Furthermore, the pdf comes fully bookmarked and the cartography is nice, though nothing too special  What’s cool is the d20pfrsd.com-hyperlinking – the good kind, mind you – the one that only hyperlinks the relevant rules instead of each mentioning of a given word. two thumbs up!

Surprise. Honestly – I read “Magmadome” and thought “lame fire-level”. Oh boy was I wrong. Beyond smart and intriguing terrain-features, this level’s basic idea is unique, cool and will make the level feel VERY unique, offering a superb means for the DM to make his players feel like gladiators and easily keep up the pressure – or take it off them. The set-up as well as the relatively cool builds for the foes, the nice traps and overall concise feeling of the level are what ultimately sells this to me – where level 3 was a panoply of interesting cultures and practices, this one is fast, furious and definitely an action-packed experience – Authors Ken Austin and David Pryzbyla did an awesome job well worth 5 stars +s seal of approval – Purple Mountain is shaping up to one awesome mega-dungeon!

Get this awesome dungeon-level here on OBS and here on d20pfsrd.com’s store!