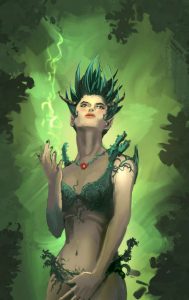 This interlude for 5e covers 2 pages, and is intended for level 1 – 3 characters, though I’d personally recommend it for level 2 characters at the highest – level 3 characters will curbstomp through this one. The little adventure does feature read-aloud text for most locales, and also has an okay full-color map. No unlabeled, player-friendly version is provided for VTT or printing out. The map has no scale noted.

As always when I review mini-modules, it should be noted that I rate them for what they are – brief sidetreks. I don’t expect epic stories from them.

All righty, in order to discuss the adventure, I need to go into SPOILERS. Potential players should skip ahead to the conclusion.

Only GMs around? Great! While the PCs are traveling through the Verdant Wood, they happen upon a game trail that leads to a clearing, where a pool and a massive oak tree greets them – alongside Seriana the dryad. Structurally, the dryad does something…dumb. She attempts to charm the PCs into helping her. As a nitpick – the ability is called “fey charm”, not “charm.” Also: Such an action is usually taken as a hostile act by all player groups I know, when asking will usually do the trick usually…but I digress.

Her request doesn’t require magic for most groups – her husband’s been kidnapped and held hostage by goblins, and she wants the PCs to save the fellow. The module offers an optional encounter, where the PCs happen upon a shrine and twig blights. Investigation of the shrine is covered…but…the pdf doesn’t properly italicize the spell reference, and doesn’t know how detect magic operates: There is no means to use the spell to detect “restoration magic”, as that’s no school of magic. En route, there is also a hunter’s trap (not telegraphed, obviously), and PCs may happen upon a goblin patrol. Problematic: The approach to the goblin lair notes a “+4 circumstance bonus to Stealth checks”, due to the lack of goblin vigilance, which is admirably precise rules-language…for PFRPG. Not for 5e.

The goblin boss has a magic dagger coated in paralytic poison (magic weapon not properly formatted), but otherwise, that’s kinda it – kill the boss, free the hostage…no stand-off, no hostage threat, no unique complication…that was a missed chance. On a nitpicky side of things, the dagger should probably make use of how poison works in 5e.

Editing and formatting on a rules language level are okay – ability/skill checks are, for the most part, properly presented. On a formal level, the same, alas, can’t be claimed, and we have a couple of deviations from the standard. Layout adheres to a nice two-column full-color standard. The piece of full-color artwork is amazing. The map, as noted, lacks a player-friendly version.

Ric Marten’s Verdant Bonds, oddly, is better than the second interlude “The Crypt on Keeper Hill” – this one has better rules, more flavor text, and doesn’t suffer from the glaring issues of the crypt keeper trip. It’s still not exactly impressive, though, and while a per se okay offering, it also leaves me without much reason to recommend it. It’s a sidetrek any GM can make, and probably has made, at one point. Granted, it’s inexpensive, but still – there is nothing here that would set this apart in a positive manner.

As such, my final verdict can’t exceed 2.5 stars, rounded down.

You can get this inexpensive side-trek here on OBS.

Please consider leaving a donation or supporting my patreon.