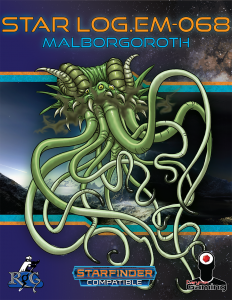 The pdf begins with a cool little query that makes clear that these entities are Tier-S threats to civilization, accounting for the massive slaughter two malborgoroths committed within mere hours – and it makes sense in SFRPG – where filtration systems and limited air supplies are the norm, an inability to deal with the superbly noxious gas these things emit…well, let’s say it doesn’t help survival. There is a small glitch, an “all” missing here, but other than this cosmetic hiccup, I couldn’t have asked for a cooler setting of the stage.

Malborgoroths, in case you missed the original Pathfinder iteration, are basically Final Fantasy’s Morbols…but how have they been implemented in SFRPG? Well, they have a CR of 13 and are Huge aberrations with a stench aura that sickens targets on a failed DC 20 Fortitude-save for 3d4 rounds. (The DC has been increased 1 above the default of the combat array employed as part of the balancing of the creature.) They are unflankable, have regeneration 13 (bypassed by good weapons) and a pretty solid condition immunity list, plus neither poison, acid, nor death will affect them. And no, if you’ve been dealing with them the cheesy way in Final Fantasy, I’ll have to disappoint you – petrification won’t work either. (Nice Easter egg nod, I assume!)

On the plus-side, they’re slow – 20 ft. extraordinary flight with clumsy maneuverability will mean that it’s possible to outmaneuver them. I mentioned conscious balancing decisions, and the malborgoroth ahs another one – they have tentacles and stingers, and stingers deal 1d12 less damage, but inject their poison. Okay, tentacles let them swallow whole (properly formatted, lacking a bite attack, they use tentacle damage to determine swallow whole damage), but the poison…oh boy. Let’s just say that reducing base damage size here was smart. They also can multiattack with both natural attacks, at the usual -6 to atk penalty.

The signature breath weapon is a 30-ft. cone, Fort DC), and it’s brutal: It can be used every 1d4 rounds. On a failed save, the creature rolls 1 + the number failed the save by d8s and gains the associated effect – which lasts 13 rounds unless noted otherwise. A table covers these effects – if you’re lucky, you only end up deafened, but poison, confusion, being flat-footed and off-target, baleful polymorph’d or flesh to stone’d is possible. Worse, if already affected, the breath builds! Baleful polymorph penalties increase and can become permanent (!!); similarly, the conditions can become permanent; those flat-footed can fall asleep and may be awoken, but here’s the catch – not by the malborgoroth’s attacks! Oh boy, this is evil. I love it. The poison, by the way? Track Constitution, 2 consecutive saves and 5d6 acid damage for 6 rounds. OUCH.

On a lore side, the pdf also does something clever – it makes these things agents of the Great Old Ones, and implies that flumphs were corrupted into becoming, well, these horrors! 4 variant malborgoroth types are also included – frigid ones get DR, can encase targets in ice and their poison deals cold damage; mindscream malborgoroths get command and feeblemind breath attack stuff, and synaptic pulse or mind thrust IV via poison. Plasmic malborgoroths cause burning 5d6 E& F, but are vulnerable to cold damage and good weapons to pay for the superior damage type. Finally, the temporal malborgoroth can use baleful alter age (6th level version, see Star Log.EM: Temporal Things), are constantly under haste and slow those that fail the save versus their aura.

Editing and formatting re very good on a rules language level, and almost as good on a formal level. Layout adheres to the series’ two-column full-color standard, and the pdf has a neat artwork. The pdf has no bookmarks, but needs none at this length.

Alexander Augunas’ SFRPG-version of these critters is not just a conversion – it is a reimagination of the great creature, and the malborgorths presented herein are pretty damn cool. There is one thing that these deadly beings lack that render them more manageable for players, one huge Achilles heel – no ranged attacks. In SFRPG in particular, this, paired with their slow and clumsy movement, makes them sitting ducks if the PCs play their cards right. In open areas, they are simply less potent. A less powerful ranged attack would have been nice to see – perhaps one a couple of CRs below the usual damage value? Don’t get me wrong, I totally get the design decision – there’s no ranged attack to balance the potency of the breath and poison, but it makes them less frightening. That being said, I still wholeheartedly recommend these deadly threats! My final verdict will clock in at 5 stars.

You can get these brutal adversaries here on OBS!

Enjoying my reviews? Please consider supporting my patreon here or leaving a direct donation. Thank you.