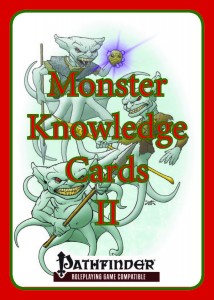 So…I’m going to break my usual format for reviewing here and instead take a look at a deck of cards.

Yes, cards. But what do they contain? Essentially, as the name suggest, Monster Lore – one feature absent (probably for space-reasons) from Paizo’s bestiaries. These cards seek to remedy the absence of DC for knowledge checks about the creatures your PCs will encounter. 4 DCs are given per card, one at DC 10, one at DC 15, one at DC 20 and one at DC 25. Alternatively, these DCs could be added to the monster’s CR for a more complex formula or modified further due to rarity etc.

At the top of each card, we can read each monster’s respective name and at the bottom, we get the appropriate Knowledge-skills for the creature – whether by knowledge of the planes or by religious knowledge or by savoir-faire in the realms of the arcane or of nature, the respective skills can be determined with a quick glance.

Now personally, I’m a huge opponent of giving out crunch-information to PCs via any checks – I am firmly opposed to e.g. spelling out the alignment of NPCs and instead tend to describe a taint clinging to those of evil alignment to minimize the amount of game-terms. Now, it is my pleasure to tell you that the respective cards, when giving out information on the creature’s capability, tends to word the respective abilities in a both understandable and concise way without giving away the precise mechanics: While immunities and resistances are laid bare with the higher DCs, e.g. spell-like abilities are described rather than simply listed, helping with the immersion of the PCs in the respective campaign setting. It should also be noted that monster-types also get their card containing general pieces of information on the respective subtype – nice!

Generally, these knowledge-DCs do help the PCs in their dealings with the creatures they encounter, but without laying bare a creatures bones, so to speak. Production-quality-wise, the cards are made from solid cardstock, though not laminated. My deck has a white line at the bottom in the otherwise red borders of the cards. On the backside, we get a picture of 3 Grindylow.

Production-wise, these cards are well worth their asking price and they offer a way for DMs to both incite players into taking those Knowledge-skills and offer them tangible benefits as well as improved immersion – so in that regard, all’s well. The white line at the bottom of the card-deck is a bit annoying, but nothing that would detract from the appeal of the deck and may very well be exclusive to my version, so no penalties there either. But not all is executed in the best possible way – first of all, and that is a personal preference, the respective DCs are always the same – more variation to account for more rare specimen being less known etc. in the basic DCs would have been a diversion from the classic take on these lore-sections, yes, but one I feel would have made sense. Additionally, I REALLY would have loved a small note under the creature’s name that denotes the page in the bestiary II in which it is found –  it would have made organizing and assigning cards to statblocks so much easier, especially since the very amount of creatures covered is staggering. HOWEVER: I do know that this is not feasible due to license-constraints etc.

Now don’t get wrong – this is a supplement that WILL enrich your game and limit the amount of metagaming going on by quite a bit and hence, improve your group’s experience while embarking on your quests and overall, should be considered an extremely useful supplement indeed. The pdf, should you opt for it, is formatted so that each page corresponds to one card and clocks in at a whopping 300 pages and comes with bookmarks for easy navigation, should you opt to use it digitally.

And here’s the cincher – I’m old-school in that regard and print out EVERYTHING and the physical deck itself, while harder to organize, is simply neat – Handing out cards to players while narrating something going on in game right now makes for a faster flow of gaming and a more immersive one – but if you do opt for the print version, be sure to properly maintain the organization of the deck – I recommend a card-folder. I also use a card-sheathe that allows me to obscure DCs the PCs didn’t make when handing these out for added fun. Navigation in the bookmarked pdf, of course, is more simple, but imho also a tad bit less rewarding for the players, but that may be just me.

All in all, this deck is extremely useful and should be considered a neat supplement that enriches your game, if one that by virtue of its medium requires you maintain some organizing discipline. Of course, you may still alternatively just print out about 4 cards per regular paper-page and treat these as a kind of lore-appendix to the Bestiary II, which may be the efficient, if not as fun, middle ground solution. All in all, we get a solid offering here, one well worth of 4.5 stars, rounded down to 4 for the purpose of this platform.

You can get these neat cards here on OBS (also in print!) and here on d20pfsrd.com’s shop!