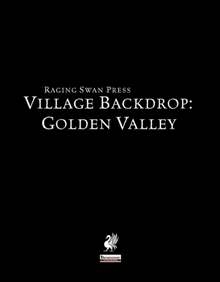 This installment of the Village Backdrop-series is 13 pages long, 1 page front cover, 1 page advertisement, 2 pages of editorial, 1 page ToC/foreword, 1 page SRD, 1 page advice on how to read statblocks for novice DMs and 1 page back cover, leaving us with 5 pages of content – so let’s take a look whether Golden Valley can maintain the streak of consecutive 5-star+seal of approval ratings the last installments of the series had!

Once known as sunset valley, the town known as Golden Valley is wealthy for a place of its size – prompted by a gold rush. Quickly, the man to become known as Boss Corl staked his claim and miners and seekers of fortune poured into Golden Valley, seeking the fulfillment of their dreams. As has become the tradition with the series, we get demographics, a village statblock, a marketplace section of available items and notable locations/NPCs – but beyond that, not all is well in Golden Valley:

Prompted by the sudden influx of wealth, prices are atrociously high – and the Boss profits from this: Gear is so expensive that it takes months to pay back the debt new arrivals incur in Golden Valley for basic equipment and thus, devolve into a state rather close to slavery. Worse, it seems like the gold has dwindled to a trickle, thus prompting more risky actions from the town’s de facto overlord. With mishaps and hazards accumulating, tensions rise as tempers start to flare – Golden Valley seems to have outlived its golden days…

6 rumors and 6 events also provide for further ideas and life and yes, we get full stats for miners as well as the local bailiff and Boss Corl as well as his enforcer.

Editing and formatting are very good, though not up to Raging Swan’s usual flawless track-record – I assume the village priest is not “sacred of” but rather “Scared of” Boss Corl. Layout adheres to RSP’s elegant printer-friendly 2-column b/w-standard and the pdf comes with a glorious map of the town that can be downloaded in high-res versions on Raging Swan’s homepage. The pdf comes in two versions, one optimized for the printer and one for screen-use and both come fully bookmarked for your convenience.

Author Eric Hindley has created an interesting dilemma – Corl holds the legal rights for the operation, but his increasing disregard for the safety of his workers will prove to be problematic at best  -it is interesting moral quandaries like this that we see all too scarcely in supplements, though they tend to result in interesting roleplaying. Making for a great insert into Andoran akin to e.g. Falcon’s Hallow, this village is yet another great offering for a more than fair price-point. And yes, I could be an anal-retentive bastard and rate this down for the one typo I found. I won’t though – the streak continues: 5 stars + seal of approval.