A Score of Trapped Chests 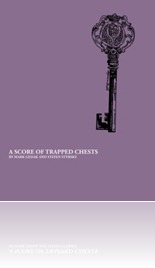 This pdf from Purple Duck Games is 15 pages long, 1 page front cover, 1 page editorial, 2 1/2 pages SRD, leaving 10 1/2 pages of content for the new treasure chests, so let’s check them out!

Treasure chest elicit, like rarely another piece of room dressing, a certain glow from players and DMs alike – the former are delighted due to all the precious loot just for the taking and the latter grin because they know that they get to try out their latest traps. This pdf offers a neat little variety of new traps for chests that come with construction-information and some rather interesting and logical ways to ensure that your items remain undisturbed. The individual chests come with a short fluff paragraph each, helping you to choose which of these to use for which occasion. CR-wise, the chests range from CR 1 to CR 15 and quite frankly, are smart: The very first chest is one that should probably be the standard for corrupt merchants and officials alike – Destroying Evidence drops oil and alchemist’s fire in the box and whoosh! All the evidence is gone. Unless the careless adventurers quickly extinguish the flames, potentially harming themselves. A trap that makes you visible as a thief features a time-delay before spraying your hands with red beet dye – no damage, just the awkwardness of hiding your hands and avoiding justice. Very cool!

Even cooler, though, would be the friendly minimics (CR 2) – these nice brethren of their species are smaller and form friendly relationships with humans and other species, guarding their possessions in the guise of small objects for the option of further studying objects. Cool, interesting, neat little creature! Of course, more classic traps like electric shocks and sprays of acid are included in the deal. The electrical chest is built with a new spell included in the deal, the defensive shock. Neat! Wizards can now also be hit with a devastating new poison called Mind Hammer.

And then there are the creature-chests – chests that summon wolves, contain slithering trackers that can breathe fire and then there’s a truly brilliant chest: One of the chest shrinks the opening PC via the new “Greater Reduce Person Spell” and unleashing a swarm of dancing elementals – Normal-sized Pcs can’t attack the swarm with area-attacks without hurting their shrunken ally, who is fighting what to him/her is a vast army of fire elementals. Iconic, smart, cool! We need more of this! A particularly devious chest hits you with a fireball, deletes your memory and remains – rinse and repeat, if you’re not careful. Extra sadistic DMs combine that with an illusion and you’re in for pain…

The higher CR-traps are devious indeed and include gates, fingers of death, weirds and even a trap the soul (including stats for its previous victim) – but, of course, we also get a neat bit of treasure for our so plagued players – The new legendary item, the Duckaxe! Yes. The Duckaxe. And the item actually rocks – you may giggle at first, but this mage-hunting axe is nothing to laugh about. The material it is made from, Noqual, is also detailed in the pdf.

Editing and formatting are top-notch, I noticed no significant glitches. Layout adheres to a printer-friendly 2-column standard and the artworks are neat. The pdf is extensively bookmarked. The traps herein are smart and range from generally useful to deviously clever, especially the reduce/swarm chest being a trap that could easily have been made a whole adventure. And then there’s the VERY low price – combine these factors, the bonus legendary weapon and the new material and we’re in for an excellent pdf at this low price point. While there are other trap-books out there on par with this one, the focus on chests and uniqueness of the design makes this a valid and cool little addition to your game. Not all of the traps feel as brilliant, though, some of them just using a spell in a straight-forward manner. This, however, is not enough to truly stain the pdf and thus I’ll settle for a final verdict of 4.5 stars, rounded down to 4.

A Score of Trapped Chests is available from: