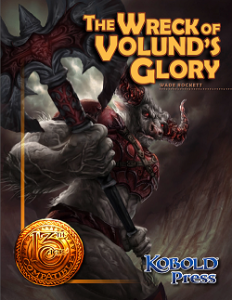 This module for 13th Age clocks in at 23 pages, 1 page front cover, 1 page editorial, 1 page SRD, 1 page advertisement, leaving us with 19 pages of content, so let’s take a look!

The first thing you need to know pertaining this module is the structure: Wade Rockett’s excellent icons (first introduced on the Kobold Press blog and in the 13th Age Deep Magic book) have a hand in the action going on in this module – they determine the approach to the item the players are after. And it should be noted that the items actually come with suggested abilities. The module can be played in a 4-hour slot, but can be hastened to a 2-hour high-intensity action-romp, with proper guidelines provided – I actually tried it out and it works!

This being a review of an adventurer-tier module, the following contains SPOILERS. Potential players should steer clear and skip ahead to the conclusion.

All right, still here? Great! Okay, so I already mentioned that the module obviously has a significantly modular structure, right? Well, the module is all about recovering the aforementioned item of power from a dwarven airship that has crashed in the desolation of the tainted Wasted West, which is now inhabited by the deadly, undead former crew. Depending on the icons the GM chooses, you may choose a rival faction of adversaries – a total of no less than 5 such teams are provided: From Mharoti explorers to shadow fey and minotaurs or derros, the teams come all on their own, handy cheat sheets, including notes on their size depending on PC group-size. Beyond that, befitting of the horribly-mutating nature of the wasted west, the module provides suggestions for reskins of the creatures herein. As a whole, the set-up provided for the GM allows for a significant replay value and the option to easily add in more groups if the players have too easy a time when dealing with the adversaries.

The module’s actions begin with the ramshackle town of “Small Comfort”, ominously named and the fully mapped, and it is here a portal with blow open and potentially render the small and desolate place a full-blown battle-field between the adventurers and the rival team. Pressing forward and potentially leaving ruins behind, the PCs will descend into the deathless defile, where a village of the notorious ghost goblins rests and allows for either diplomatic or lethal problem-solving. Beyond these, PCs will have a chance to eliminate another group of rivals and, when finally reaching the eponymous, crashed Volund’s Glory, the PCs will have to eliminate the dread undead that once were the crew to claim their due.

The copious appendices also include an array of neat adventurer-tier magic items and yes, we get brief icon sketches, enough to run it.

Editing and formatting are top-notch, I noticed no significant glitches. Layout adheres to Kobold Press’ beautiful two-column full-color standard and the pdf comes fully bookmarked. The cover artwork is also represented in this book in a gorgeous full-color page.

Wade Rockett’s “Wreck of Volund’s Glory” is perfect for quick, fast-paced no-frills convention play; think of this as a kind of highly modular, fast-paced action romp through a kind of post-apocalyptic environment. With speed, evocative backdrops and a high-paced set-up, this module is all about presenting some of the highlights of the evocative Wasted West. The module itself is pretty simple, but, like a good action movie, it works exceedingly well…and turns out different in every time you play it, which is pretty cool indeed. Ultimately, this renders the book a fun, fast-paced action-module well worth of a final verdict of 5 stars.

You can get this great, fast-paced action-romp here on OBS!