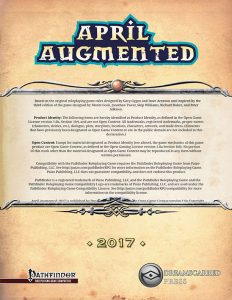 We begin this one with a new 5-level PrC, the chessmaster, who needs 5 ranks in several skills, BAB +4 and the collective class feature to qualify. The PrC gains d8 HD, 4 + Int skills per level and doesn’t gain additional weapon or armor proficiencies. BAB-wise, we get a 3/4 progression as well as Ref and Will-saves that improve to +3 over the course of the PrC. 4 of the 5 levels yield manifesting progression and levels in the class stack for the purpose of the collective’s power. The base ability of the chessmaster is very, very strong: As a standard action, a member of the collective gains a benefit from Astral Construct Menu A, with 3rd level unlocking menu B and 5th level unlocking menu C – these last for one round per prestige class level, which is the literally only reason I am not screaming hellfire right now.

At the beginning of combat when rolling initiative, the collective may move 10 ft. as a free action. This movement does not count as having taken an action, but does provoke AoOs from eligible targets. 2nd level provides the immensely powerful castling ability – swap two members of the collective as a move action. It is codified as a teleportation effect, but does NOT provoke AoOs. Yep, that’s infinite switcheroo. Oioioi. At 3rd level, the PrC gets En Passant: As a standard action, the chessmaster may designate a foe: If the foe leaves the space, he leaves behind a phantom afterimage – hitting this image inflicts damage to the foe. This lasts only for one round, but oh boy. At 4th level, the chessmaster may declare stalemate as an immediate action when an ally rolls an opposed check, but before results are made known. Both rolls are treated as the higher result. Also at this level, as a standard action, the chessmaster chooses an ally: A foe charged by this ally may not move until the beginning of the chessmaster’s next turn. An ally may not be reused for a pin for one minute after use. At 5th level, the PrC learns checkmate, which is pretty amazing: Designate an ally and a foe – the ally must be able to act before the foe in the initiative order. The ally may immediately move their speed and take a standard action. If the foe is killed or reduced to 0 hp, the foe is temporal stasis’d. If not, the ally returns to his space, all results of the action undone. This also has a 1 minute cooldown.

A very potent PrC and conceptually awesome; at its power-level, I’d consider it suitable for Path of War power-level gameplay. Regular campaigns should think long and hard about its extremely potent powers before allowing it, though.

Next up would be an expansion for the Monster Classes-series, namely the owlbear. Base race-wise, these are magical beasts with +2 Str and Con, -2 Int, Medium, have low-light vision and darkvision 60 ft., +1 natural AC, are quadrupeds,…and really cool: The pdf specifies the ITEM SLOTS of the creature…and we get an age, height and weight table! Big effin’ plus and makes me hope for the series’ current revision! The monster class presented for the owlbear covers 5 levels and sports full BAB-progression, good Fort- and Ref-saves, d4 claws at 1st level, d4 bite at second (both upgraded to d6 at 4th level), +2 natural armor at 2nd and 5th level,, scent at 2nd and an upgrade to Large size at 4th level. 5th level yields grab. Attribute bonus-wise, we get, +6 Str, +2 Dex, +6 Con, +2 Wis, for a total of 16 points gained over 5 levels, which is pretty potent. There are 4 feats for owlbears included: Arctic Adaption nets +5 Stealth in snowy areas and cold resistance 5 as well as a swim speed of 30 ft. – which is A LOT for one feat. Deep Adaptation nets darkvision to 120 ft., blindsight 60 ft. and eyeless if you take it a second time. Fruss Variety net fly speed 30 ft. with poor maneuverability and prolonged flight fatigues the owlbear. Great Hook-Claws net a climb speed of 20 ft. as well as a claw damage die upgrade by one step. All in all, very potent feats – but shouldn’t the varieties be mutually-exclusive or is the potentially blind, white, flapping owlbear intended?

Race-wise, we are introduced to the longcatfolk, who gain +2 Dex and Wis, -2 Con, and they are treated as one size smaller when making an opposed check that takes size modifiers or special size modifiers into account, provided this would be beneficial to the longcatfolk, and they may squeeze through smaller spaces, replacing sprinter. 1/round, they can choose an adjacent 5-ft.-square and count as occupying that square for flanking purposes and once during that round, at -2 penalty, they can attack from that square, replacing natural hunter. The Munchkin catfolk gets +2 Cha and Int, -2 Con, is Small, slow and gains +2 to Bluff, Diplomacy and Perform, replacing natural hunter. Attitudes may be shifted by them an additional time, replacing sprinter.

Grippli may choose from two alternate racial traits: Bloodfrogs increase the Dc to still bleeding by +10 and even magical healing attempts to remove bleeding requires a CL-check to succeed. This replaces camouflage and swamp strider. Steelfrog nets a +6 armor bonus, but also a maximum Dexterity (should be capitalized) bonus of +3 and a -3 armor check penalty due to calcified skin. The skin may be enhanced as armor, replacing camouflage. Kitsune may choose “None of that weeaboo crap, either: They lose change shape and agile, but get +2 to Intimidate and may Intimidate as a move action – if they later gain the ability to intimidate as a move or swift action, they increase that to a free action…which probably should still have a cap per round. Dodo Tengu gain +2 Int and Cha, -4 Wis, gain the graveblood subtype and +4 to initiative, as the pdf specifies, “for some reason”, replacing sneaky…which is too strong in my book. Emu tengus get +2 Str and Int, -2 Wis and powerful build, which replaces swordtrained and gifted linguist. They also get sprinter instead of sneaky, i.e. 40 ft. movement and Run as a bonus feat.

The Potoo has the following text: “What. God. No, this is a terrible idea. Why would you PLAY this thing? It looks like a goddamn muppet.” XD Trait-wise, we have +2 Wis and Dex, -4 Cha, +4 to sight-based Perception, +2 to none-sight-based Perception instead of sneaky. +2 to Bluff and Diplomacy to convince other creatures they’re harmless, -2 to Diplomacy in grave circumstances (the ability’s called “Oh My God It Sounds Just AS Dumb” for a reason…) and +4 to Disguise checks to impersonate a log and may do so as an immediate action. This replaces swordtrained. And yes, I actually laughed out loud here. The shoebill tengu gets +2 Dex and Con, -2 Cha, slow and steady, never take an Intimidate penalty for failure instead of gifted linguistic…and instead of swordtrained, they ignore ALL DIFFICULT TERRAIN. Wtf?

Fans of Path of War can take the new Damaged Glassware feat – initiators with two maneuvers from Shattered Mirror and Riven Hourglass gain an interesting option: When initiating a riven hourglass maneuver while within a shattered mirror stance, choose one target of the strike in its range. All squares within 10 ft. of the target are filled with glass shards, even if the strike misses. These shards vanish after one hour and gain an enhancement bonus to atk and damage equal to the level of the strike used and bypass DR as though they were a weapon with the strike level’s enhancement bonus.

The psionic power false veil generates a veil that can be formed on any open chakra, which may be invested with essence, acting as a dupe. The cat-tastrophy level 9 spell affects a 1-mile radius area generating 1d100 + CL cats per round, with the cats potentially being focused on one square. Creatures slain erupt in even more housecats. Oh, and it may be made permanent. But only kind of. When the Focus cat’s ears of wood are worn. Hilarious and made me go WTF in a good way rather hard. Recall Embarrassment is a debuff and animalfolk, lycanthropes etc. may appreciate the headpat cantrip and its greater level 1 version. Speaking of cantrips: Poser casters will love unlimited power while other may like the shadow puppet cantrip. Pun-tastic: Tailful Polymorph- which grows a tail. The greater one nets you more variety in the pseudo-animalistic features you wish to bestow.

Fans of akashic mysteries will appreciate the drunkard’s sash, which prevents alcohol penalties, and drinking something nets twice character level temporary hit points, which may only be gained once per round and last one minute and may net essence invested in DR /-. Binding it to the waist nets bonuses depending on the substance consumed; Alcohol nets +2 Str, Tea + 2 Dex…etc. – these bonuses, intriguingly, are tied to the presence of remaining temporary hit points. I am not too keen on the nigh-infinite temporary hit points, but whether I’d consider that problematic would depend on the respective campaign.

Bottles or kegs of endless alcohol would make any tavern ridiculous; classic rulings binders provide +2 to Spellcraft and help identify spells untrained. Oh, and yes, there is a monster manual-equivalent (lol). The Familiar’s familiar is fun in that one sentence manages to cram the word “familiar”, in a rules-relevant manner, mind you, no less than 12 (!!!) times…and gets the italicizations right, showcasing well why formatting matters. Kudos! It gets even more absurd with the familiar’s familiar’s familiar -21 times in one sentence. Yes, that is my type of humor. Yes, I am weird. Marobo is, surprise, a magic, automated cleaning device and come with a greater variety. While a sidebar notes that they can be used as familiars, they lack the stats for that. Plushie Powder shrinks a deceased creature down to Tiny size and makes it a plushie…and there is an infinite bag variant…talk about adding insult to injury.

Finally, we get the highly customizable pocket assistant – basically a magical smart phone that can be fitted with a wide variety of apps: Daniel’s Roster (Craig’s List), locate myself or Necromancy MOVE, which appropriately, traps SOULS, make for some interesting options that made me smile.

Editing and formatting are very good and really impressive for a PWYW-kinda-joke product, on both a formal and rules-language level. Layout adheres to Dreamscarred Press’ two-column full-color standard and the pdf has no artworks (but funny lines that explain why…) and comes with a second, more printer-friendly version. The pdf comes fully bookmarked for your convenience.

Adam Boucher, Anthony Cappel, Katia Oakes, Jacob Karpel, Jeffrey Swank and Patrick Miller have created an interesting pdf here: As we’ve come to expect from Dreamscarred Press, the rules-language is crisp and the respective concepts are depicted in a creative and fun manner. At the same time, it should be noted that the power-level of the options herein is generally pretty high – not all of them, mind you, but I’d strongly encourage checking very closely whether or not to include some of these in low or medium-powered games. At the same time, this is a) PWYW and b) a really *FUNNY* book that gets some actual mileage out of its funny components…and that’s something to be applauded…and it’s the intention of the book. Plus, high-powered campaigns will probably enjoy this VERY MUCH. While not for everyone, this does have its raison d’être and is worth downloading -at the very least, you’ll get a chuckle out of it (The Potoo made me laugh SO HARD!) and you can decide relatively easily whether or not it is for you. Hence, my final verdict will clock in at 5 stars.