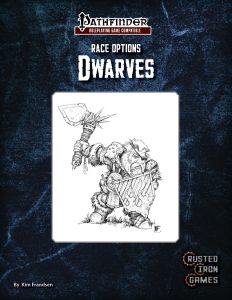 All right, so what do these alternate racial traits cover? Well, they cover, for example, training in medium and heavy armor that allows the dwarf in question to add +1 natural AC when wearing them, replacing stability with a different kind of dwarven resilience. Gaining a bonus to atk when outnumbered instead of hatred also ties in well with the flavor of the dwarven people. Life on board of ships and a trait that represents dwarves not having access to steel make sense and allow for concise presentations of people with different cultures. Bonuses against mind-affecting spells based on a life of adherence to clan principles, or ones to Survival underground based on a desire to retake ancient homes or AC-bonuses versus flanking foes – the alternate racial traits represent a great marriage of tying into dwarven lore and making the respective switches make sense and retain balance. Kudos indeed – I do not have a single complaint in this section!

The pdf contains the spelunker racial archetype for the ranger class, which is locked into favored terrain underground, leaving no tracks there and replaces woodland stride with cavern stride. Solid, if unremarkable one. The pdf becomes more interesting when we take a look at the new equipment, which contains 3 new exotic ranged weapons, like the spiked bola that can be filled with fluids or the peg-leg pistol, which is kinda awesome from a flavor perspective. The dwarven fountain would represent a fantasy-equivalent of a light flamethrower, which is similarly nice, though I’ve seen that concept before. As a purely aesthetic glitch: The damage dice in the table sometimes sport capitalized “D”s instead of “d”s, but that does not impede the functionality of the material. The pdf contains rules for adding hollow cores to weaponry, allowing them to double as a blowgun, which is a cool idea. However, the verbiage here is a bit wonky, referring to “equipped” when the pdf probably means drawing and notes increased ranges for weapons with longer shafts, but does not provide rules to back that up. A fire-retardant powder makes sense and clay that allows for the reshaping of stone similarly is nice. Alchemically-strengthened obsidian makes for a cool material, particularly for cultures sans ready access to metal.

Next up would be 6 new racial feats, with two providing some nice tricks for seafaring dwarves with better use of siege engines. Using shields as a standard action to grant yourself concealment is BRILLIANT and frankly should be part of the default options for the item-class, so that one gets two thumbs up from me, as does the spear-enhancing feat that makes it a REALLY bad idea to charge a dwarf with a spear. A +2 poison enhancer is pretty much the definition of filler and gaining Blindsense 15′, as soon as level 1, is pretty strong and not something I’d suggest for every group.

The pdf also features 3 magic items: Seafaring dwarves will like anchor-all, which, once per day, may bring any vehicle to a screeching halt unless moved by truly formidable forces. Headbands of shared animosity allow for the temporary sharing of hatred/favored enemy bonuses and the head-dress of the jaguar nets skill-bonuses and a 1/day bite attack, which does not specify primary or secondary, but one can default to the standard there. Still, anchor-all is the star here. The pdf concludes with a new spell, the 3rd-level call of the clan, which nets you and all allies of the same race within 30 ft. +2 to atk, weapon damage, saves and skill-checks. Not the biggest fan here.

Editing and formatting are good, I only noticed minor hiccups. Layout adheres to Rusted Iron Games’ two-column full-color standard and the pdf has some seriously nice b/w-pieces or art. The pdf comes fully bookmarked for your convenience.

Unless I am sorely mistaken, this is the first pdf by author Kim Frandsen I’ve had the pleasure to read. Yeah, pleasure. I have seen a lot of dwarven options and the ones herein, contrary to my expectations, actually managed to make me smile a couple of times! There are some serious gems herein and the alternate racial traits are immaculate in their balance, while remaining true to the themes of the dwarven people. From the new items to the feats, there is a bit of filler within this pdf, but as a whole, I consider this a worthwhile supplement. Taking the freshman offering bonus into account, my final verdict of 3.5 stars will hence be rounded up. Nice job and a promising start!