Psychedelic Fantasies: Beneath the Ruins (OSR)

Psychedelic Fantasies: Beneath the Ruins (OSR) 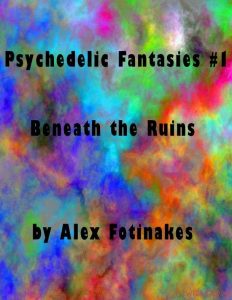 This series adheres to a pretty minimalist approach to module presentation – two columns of black text in a white background. Headers are bolded, but the small statblocks have no internal formatting – this is as minimalist as can be. As for the rule-set, the module does not subscribe to a particular OSR-game or edition, claiming general compatibility, which means that you will have to do some tweaking to modify the module for your preferred old-school game. 60’ (20’) are the default movement rates, HD are noted, and AC is provided in the descending convention; the monsters state a single save as a static rating, and note e.g. “diffuse – receive only half damage” or “climbs as spider”– you get the idea.

In short, this has only the strength of its prose and concepts to lean on. While lacking a clearly-indicated target level, I’d recommend it for the low-to-mid level range tier; probably not for 1st level, but 2nd to 3rd to, at most, 5th level should be a good call, depending on the skill of your players and the power-level of you given system’s PCs. There is a rudimentary, hand-drawn-looking map on the final page – it does its job, but the lack of a key-less player-friendly version makes it useless for VTT or handout purposes, as secret rooms etc. are clearly indicated.

Structurally, this is a dungeon-level with two optional sub-levels; the dungeon-level offers sufficient branching paths and the like to not feel like a railroad, and differentiates between caves and worked rooms, with different wandering monster tables provided. The pdf offers stats for laser pistols and rifles and body armor, having a distinct science-fantasy touch, which is also what I’d consider this to be, genre-wise. There are no read-aloud texts provided. This very much feels like a mega-dungeon teaser, as far as I’m concerned.

All right, only referees around? Great! So, on the lost continent, in a ruin-choked jungle, there lies Kihago, a kind of pocket dimension accessible via a solid edifice and an impregnable gate, which sometimes opens. When it does, folks venture inside, and those that return are horribly traumatized, carrying wounds that never truly heal, but also are rich. Once the PCs enter, they will find a ferryman, black sands – this pulls out all the stops to get you hyped about the awesomeness to follow! Okay, sounds fantastic, right, so how hellish is this place? How weird?

And see, that’s where all this grandiose buildup comes crashing down. Kihago is probably the cookie-cutter definition of a vanilla science-fantasy dungeon-crawl. This begins, but does not end, with the factions, each of which gets its aforementioned sub-level. Faction #1 are the Luminites. Think of them as Brotherhood of Steel, save as an esoteric order and minus all things like power-armor and advanced tech that made them cool. They don’t believe in the world outside. They’re also a sausage fest and have an agenda they don’t really comprehend themselves. They make no sense, considering how many individuals obviously enter to die/escape. The second faction, the Tribe of Yrtuk, is a bit better – they are essentially a tribe of dungeon barbarians, thinking about it as a living entity. They are quite friendly, have women – a practice where initiation requires exposure to a mutating altar.

The dungeon itself is not much more interesting than the factions and feels like a jumble of concepts – here’s a TV-screen flashing an ancient logo, misidentified as the will of a deity; there’s  an illusion of a feast, basically a looping recording of a tragedy from ages long past. Think a  “fish man”, a “slithering worm” or a “rock polyp” is evocative? Yeah, me neither. The dungeon lacks theme, consistence, unique flavor. There is one thing here I enjoyed – the notion that yeast plays a crucial role in, you know, not starving, and that there are carnivorous yeast puddles and yeast zombies roaming around. This is cool and something I’ll gladly use. It does not excuse how utterly underwhelming the remainder of the dungeon is, though.

Editing and formatting on a formal level are okay, on a rules-language level, they suffer from not adhering to a specific rule-set. As mentioned before, layout is essentially two columns of b/w-text, and the cartography is functional, if not much more. Neither player-friendly maps, nor bookmarks have been included.

I hate to be that guy, but Alex Fotinakes’ “Beneath the Ruins” is just not interesting, much less psychedelic. After blowing its ammo on an epic setting of the stage, this turns out to be a bad mega-dungeon teaser, and frankly, from Stonehell to Rappan Athuk to all the other ones, I’d pretty much play any of these over this one. The science fantasy components are pretty trite for the most part as well. This wanted to be the first part of a mega-dungeon, with an epic wilderness surrounding it; there is potential here. Building up to Kihago, finally getting there, be trapped – yeah, I can see that rock hard! Here, it doesn’t because it doesn’t deliver on any of its promises. So, dungeon is quasi alive? Know what did that infinitely better? Eyes of the Stone Thief. Yeah, I know. The OSR-crowd is hissing like a vampirekitten presented with a dog-shaped, wet crucifix, but hear me out – even though that mega-adventure is for 13th Age, the strength of its concepts, what it entails to live in a dungeon? It does everything much better and is worth getting for those alone. Oh, and before you ask: Yes, pretty much all other modules in this series are more far out and deserving of the moniker “psychedelic.” This is a true dud if I ever saw one, and in the absence of formal criteria to recommend, it is the yeast that elevates this module from my final verdict of 1.5 stars to the point where I can round up. I can’t even recommend this for the low price-point.

Enjoying my reviews? please consider leaving a direct donation or supporting my patreon! Every bit helps!