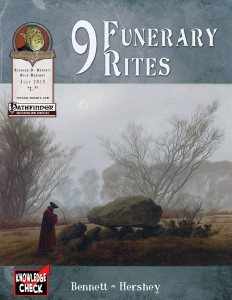 This installment of the Knowledge Check-series clocks in at 14 pages, 1 page front cover, 1 page editorial, 1 page ToC, 1 page SRD and 1 page advertisement, leaving us with 9 pages of content, so let’s take a look!

There are theories out there that argue that mankind is defined by two conflicting notions and forces dragging us onwards to life – a striving for love and a striving for death, to oversimplify the terms of Eros and Thanatos unduly with all their ramifications – apologies for that, but we’re here for a review and I am perfectly willing to engage in discussion with you, should you choose to. Back to the review – it is fascinating in such a context, that ultimately most human culture develop a stigmatization of the representation of one of these forces, a tabooization, if you will. No offense is meant by this, but e.g. traditional, extremely conservative takes on Sexuality in America would be one such example – on the other side, Thanatos, a fascination with violence and lack of censure thereof can be seen in that culture, with Europe and Japan, as two prominent examples, exhibiting the inverse – much to my chagrin, I have to import quite a few games intended for adults, in spite of me being a mature person – why? Because violent scenes get cut and I *LOATHE* any type of censure. On the plus-side, I do not suffer any problems getting erotic material.

Where am I going with this overblown introduction? Well, it is quite frankly baffling that, in a game so much representative of our values and experiences of our conditio humana (ironically so, considering how many non-humans we play), that central themes of our very existence, namely sex and death continuously fall by the wayside, both, I assume, in the name of making books child-friendly, when knowledge of neither is, per se, detrimental to a child’s development, much less so in the case of adults. And yes, I mean DEATH. Not the blinking enemy evaporating, the capital letter exhibition of the grim reaper’s prowess. And you will have seen him perform his grisly work: Ina world, where we are sheltered in increasing amounts from “negative” influences, being confronted with tem can hurt: I’ve seen grown men cry for their fallen character, heroically vanquished to defeat the forces of the dark and some of my most intense roleplaying sessions were funerals for characters that had fallen.

Isn’t it peculiar, then, considering all of that, that unlike 2nd edition’s sourcebooks, which mentioned elven songs so beautiful and heart-rending they could kill a man or other sources, which noted the elaboration of a valiant dwarf’s deeds, with ritualized swearing of vengeance versus his foes by his clan, in current iterations of the game, we know nigh nothing about funerary customs and rites for just about anyone? Isn’t this particularly odd, considering that non-adherence may result in the undead rising, as many a monster’s fluff write-up makes us believe? Well, you see where this is going – I very much consider this book VERY overdue.

Within the pages of this humble little pdf, sample funerary rites are presented, rites that tell us something about the cultures that spawned them: Dwarves, for example, have a rite herein, where the remains of the honored dead are cleaned of flesh in the flames of a furnace – thereafter, tongs are used to provide bones to friends and family for the creation of tools; the skull is taken to the family’s shrines and finally, the remaining bones are ground to dust, used to enhance the crafting of future items. This tells us something about dwarven values, family and also their relationship to their very own bodies.

On a less somber or majestic side, the ogre-funeral depicted herein amounts to culturally enforced cannibalization of the target – old or failed ogres are called forth and then ritualistically attacked by members of their family and blood – when they finally succumb, they are consumed, henceforth lending their strength to those that lived to break them. Quite the opposite to this, the elven funerary rite features applications of nature-related magic, symbolic union with trees – the elf in question’s tree will be tended, with poultices and gentle repose being used to keep predators away, with continuous plant growths and a final move earth magically accompanying the grieving process and the final, proverbial, burial.

Gnomes and Hobgoblins are also featured among the more interesting racial ceremonies, though races are not all that are covered here – a burial at sea, a secular burial, that of a druid and a thief’s funeral are covered herein as well – some of which feature formulaic read-aloud texts to accompany the key steps in the ceremony.

Editing and formatting are very good, I noticed no significant glitches. Layout adheres to a nice full-color two-column standard. The pdf comes fully bookmarked for your convenience.

Richard D. Bennett provides an interesting, captivating little system-neutral pdf here – no matter the system you use, as long as your game is even remotely indebted to the traditional fantasy genre, you’ll find some inspiration herein, for this pdf’s rites add to the respective cultures, makes them feasible, allows for the breathers and enhances the overall believability of the cultures you depict – try it: Let your PCs participate in a funeral after an attack by your adversaries. Let them see grief, pain and hope – I guarantee they will be more motivated to defeat whoever has wrought this pain. Similarly, the witnessing of their foes, even the brutes, exhibiting grief and pain may very well serve as a better means of making them feel alive and relatable.

So, all awesome? Well, yes…and no. You see, this supplement does a surprisingly concise job at its task and is surprisingly compelling at what it delivers – but it does suffer from the necessity of having to cater to general cultures, not specific ones: Instead of campaign setting specific races or cultures that exist as a coherent identity, this pdf needed to, by virtue of its design, adhere to the broad strokes pictures we know from the tropes of fantasy. What it did in this context is impressive, but ultimately, the small components, the tidbits are impossible to feature in such a broad stroke picture, but they are ultimately what transforms the great into the awesome, emotional finale. So yes, this is an important pdf; a worthwhile offering and one that I hope will spawn sequels…but it falls a bit short of truly pulling my heart’s strings, of blowing me away. Still, I encourage you to take a look – my final verdict will clock in at 3.5 stars, rounded up to 4.