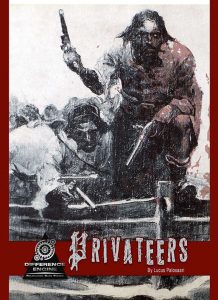 So, a rules lite swashbuckling/pirate game? Why not! But before we start, let it be known that this game can be used in pretty much any context – I could see it work for a scifi-game, for example, pretty well. The game requires 2 six-sided dice and begins with the character generation.

You start by choosing a nickname, followed by selecting your attributes. There are three of those, the first being Mental, which denotes your wits, cleverness, will, etc.. Physical describes strength and endurance, agility, etc. and finally, Social, determines the character’s charm, persuasiveness, humor, etc. You assign the values +4, +3 and +2 to these.

After this, you choose one talent and one flaw; talents generally tend to provide a +2 bonus to one type of challenge, while flaws either provide a -2 penalty to all challenges pertaining some broader aspect, or -3 to challenges pertaining a more limited component – enough of those are provided to get a sense of the intended balance and make the notion of designing more of them yourself simple.

Talents and flaws may also influence your Health – the default starting value is 8.

After this, you choose your gear – gear doesn’t give you bonuses (at least usually!), but does allow you to perform certain tasks. All privateers begin with proper clothes, a knife, a blunderbuss and a letter of marquee, and the group shares a ship. Beyond that, you name items, such as a parrot or the like, and perform a simple challenge – if you win, you get the item; if not, then you don’t get it. You get to roll until you lose or have 5 items. A simple challenge is a binary roll of 2d6– you roll against the opponent, and if you win, you win, if you lose, you lose. Ties are rerolled. This is the most simple resolution method herein, but not the only one – I will get to others later.

Finally, you can act traits like age, weight, etc. and other non-.mechanical game data –and bingo. Character creation is very much possible in less than a minute – if you roll for items all at once and use colored dice, you can definitely resolve character creation in even less time.

Progression is wholly in the GM’s hand – Health is the combination of all Attributes; other than health-increases, gaining talents or removing flaws are the suggested means to depict character growth.

The Difference engine’s core resolution mechanic is to roll 2d6 + Bonus versus 2d6 + Bonus. Impossible tasks are not rolled, and easy tasks are resolved as automatic successes. Before dice are rolled, the GM and player agree on Stakes – what happens on a success, and one a failure.

The winner of the challenge is the one with the Higher Result; in case of a tie, Bonuses are compared; if the bonuses are the same as well, the highest rolled result on the dice acts as a tie-breaker – and should this still be tied, the player wins. In the case of challenges between players, neither fails – they can reattempt the check on the next turn.

But why is the engine called “Difference Engine”? Well, to determine your success in a challenge, you can have different successes – there are actually 7 degrees of success; by barely making a challenge with a tied roll of +0, you achieve minimal success, while a Difference of 11+ means an incredible success – fighting and jumping examples allow the GM to easily determine effects for a given result.

Teamwork is very potent – the player with the highest attribute rolls 2d6, and adds +1d6 per additional privateer involved. Only the highest two dice results are calculated.

Examples on how to interpret the rolls and how to make the eponymous Difference matter are provided, with several simple suggestions illustrating e.g. what happens if both player and GM roll poorly. The system knows critical successes (double 6s) and failures (double 1s), and the pdf even explains what happens on a double 6 opposed by a double 1, walking you through the entire process of using this.

There is one more factor to consider – luck. Each character begins play with 1 point of Luck, and more points are gained whenever a Double is rolled ( i.e. two 2s. two 3s, etc.); if the players use Luck, the GM gains one Luck, mirroring a system I have used with some success for hero points and similar mechanics in more complex systems. Using Luck BEFORE the roll lets you add +1d6 per Luck used, but only the highest two results are used to calculate results; OR, you can add +2 per Luck used. If used AFTER the roll, you get to add +1 per Luck used OR you may reroll one die rolled, but must take the new result.

Combat is classified in turns, which correspond to no set amount of time, allowing you to categorize them anew per frame (so that naval combat might have longer turns); initiative is stacked greatly in the PCs’ favor – you begin left of the GM, round the table, with NPCs etc. acting last. Akin to how VsM-games work, difficult movement may require Mental or Physical tests. Attacking may be resolved by rolling Physical vs. Physical, Physical vs. Mental, mental vs. Mental – it depends on the context. Damage is contingent on the weapon employed and the Difference– simple weapons cause 1 base damage, improved weapons (this includes btw. the starting blunderbuss) 2 damage and advanced weapons cause 3 damage. PCs reaching 0 Health take their negative Health as a penalty to all challenges If negative Health exceeds one of the PC’s attributes, they can’t use challenges in that attribute any more. At -6 Health, a character falls unconscious, at -10, the privateer is dead.

Healing is handled easily: Roll a Mental challenge, and add Health value of target, whether positive or negative, to the result. On a success, the target regains half the Difference (rounded down) Health. On a failure, though, the Difference is taken as damage! So no, Health-scumming is not wise.

Ship to ship combat knows 6 general roles, which all have so-called techniques – specialized challenges that e.g. allow a surgeon to heal the crew, potentially reviving crew; master gunners may initiate broadsides – you get the idea. Creation of new roles and techniques is a simple process as well. Ship to ship combat is structured in three stages – sighting distance, shooting distance and boarding distance, with all three stages properly explained.

Ships have simple stats – they have a base damage for cannons, a maximum Hull (the corresponding term for a ship’s Health), a maximum and minimum crew rating – the crew rating is an abstraction and may be jury-rigged for your purposes.

The GM section provides advice and also sample bonuses that may be applied to roles to simulate 6 different difficulties – an easy task may only have a +1 bonus, a nigh impossible one +11. We also get a couple of sample stats and a nice little character sheet.

Editing and formatting are top-notch on a rules-language and formal level. Layout adheres to a 1-column b/w-standard with red highlights, and the pdf features thematically-fitting and modified public domain art. The pdf features bookmarks for easy navigation.

Lucus Palosaari’s work on VsM-engine products has informed a few of the components herein, but personally, I was also reminded of Into the Odd – both good things, since these are two of my favorite rules lite roleplaying game systems. With a focus on narratives, the system has one task it needs to handle well: The storytelling should not amount wholly to competitive BSing, and it is my pleasure to report that, simple though the game may be, it has a surprising depth to it. The techniques and how they work, the weapons – this book presents a great chassis and explains it in a way that is supremely easy to expand upon. I could e.g. see myself grafting the excellent VsM-magic system or a kind of arcana-system or starting packages from into the Odd onto this one. The one weakness of this game would be the lack of options regarding gear – sample options and prices and guidelines on how much loot to award would make sense and have further added value to this neat book.

That being said, do you know how much this is? $1.95. I kid you not. You can’t even get a cup of joe for that around here, and I consider this to be, frankly, a steal – the system is so easy to adapt and graft that a good GM can create complex tales, devise progression reward mechanics (another aspect that could use some expansion) – but more importantly, the system, as presented, can be arguably run without the pdf. The beauty of the system lies in the fact that, once understood (which will take a maximum of reading the pdf and playing perhaps twice), it can be run spontaneously. This is a pretty big deal.

Now, for the future, I’d love to see books that expand talents, present gear, perhaps magic, more ship-options and the like – but right now, for the purpose of this review, I’ll remain with a final verdict of 4.5 stars, rounded down by a margin. This is a great system with promise galore and the potential for staying power, but right now, the pdf presents the core and relies on the Gm to expand upon that. Consider me excited to see more, and if you’re looking for a great game to teach new players the joys of roleplaying, you’ll find very few as beginner-friendly as this one!! (As an aside – The Difference engine also can help kids improve their math and hone their sensibilities regarding stochastics, but that as an aside.)

You can get this rules-lite, easy to grasp game here on OBS!

Enjoying my reviews? I appreciate a tip, every little bit of support via direct donation or of my patreon. Thank you.