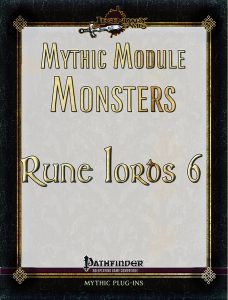 This inexpensive little pdf clocks in at 13 pages, 1 page front cover, 1 page editorial, 1 page SRD, leaving us with 10 pages of content, so let’s take a look!

What exactly is in here? Well, know how the AP-installment have a couple of monsters in the back? This book converts the beasts in the back of the furious finale of RotRL, Greg A. Vaughan’s “Spires of Xin-Shalast”, into mythic critters, so let’s take a look and check whether this holds up!

The thread of the weird as a subtext of Golarion was featured in the existence of the denizens of Leng prominently, who have been translated to CR 10/MR 4. The strange circulation of these beings now features toxic blood and the abilities of the being complement well the planar weirdness of these beings. Similarly associated with Mythos and folklore, the CR 21/MR 8 Wendigo with its cannibal compulsion is cool – but, OMG, really cool would be the defensive withdraw that leaves a fetish-double that fakes death and can cause deadly compulsions in those exposed to it. That’s BEFORE the chill, the heart eating, draining of mythic power and the hit and run abilities. FINALLY, a build worthy of legendary wendigo! YES! The pdf has the Suppress Vulnerability mythic feat reproduced here for your convenience.

At CR 15/MR 6, the scarlet walker’s mythic version comes with a blood-draining gaze that can penetrate, x-ray style, through hindrances, move through difficult terrain sans issues and use mythic power to exsanguinate foes…or cause the targets to become entangled in their own vascular system, ripped from their body…now if THAT is not some disturbing, awesome imagery – glorious!

At the same MR/CR, the kuchrima lamia now get accelerated onset disease-causing, a replaced and improved version of the devastating sniping abilities of the base critter, a reflexive feather burst and the option to imbue rays that hit them into rays they can send back to the sender – cool. At CR 18/MR 7, the hungerer lamia with its aura of famine, the option to turn the blood of those affected by their acid to…acid and suffocate them…oh, and steal feats or spells. Absolutely inspired!

And if that is not yet enough, what about the CR +3/MR3 lamia harridan template, which represents the true master-enslavers/tyrants of the lamia, enhancing the enslavement-themes.

At CR 22/MR 9, the signature rune gaint, perhaps the most evocative of RotRL’s giants can blind those casting nearby, cause Wisdom-drain, generate showers of lethal sparks and parry attacks directed at it – superb! The pdf does also feature a version with the giant simple template added, increasing CR to 23 for this engine of destruction.

Jason Nelson, Jim Groves, Tom Phillips and Jonathan Keith’s critters herein are definitely all-killer, no filler – I am particularly enamored with the glorious Wendigo-build, though scarlet walkers and lamias similarly are great. The template could be a tad bit more flexible for the CR/MR-adjustment, but that should not be taken as a complaint. This little pdf is great – 5 stars + seal of approval.

You can get these great mythic critters here on OBS!