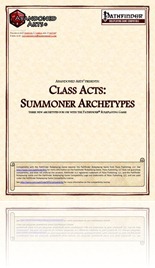 The first one is the Malefactor, a summoner that replaces summon monster with a touch attack that deals untyped damage, thankfully only 3+Cha-mod times per day, though. His frightful eidolon may demoralize foes and several magic evolutions are modified by replacing spells that deal with healing and replacing them with bleed, inflict etc., making this essentially an “evil” summoner. Not too exciting in my book – PLUS: This archetype is called just like a certain best-selling unluck-based class by TPK-Games. Not cool. A rename would probably be appropriate, if only to avoid confusion at the table.

The Occult Binder is a summoner that exchanges power of his eidolon (which is ½ as powerful) for access to witch patron-spells from a selection of patrons (which are also empowered when delivered via the eidolon and have a higher DC). If that was not ample clue – shield ally is replaced by the power to deliver your touch spells via your fragile eidolon. Also rather cool – your eidolon’s aura of wrongness can suspend beneficial and detrimental moral penalties and benefits when adjacent to a creature. Overall, a rather smart, very interesting archetype, but again one that suffers from an unfortunate name – “Binder” is usually reserved in a 3.5-context for binding spirits as per pact magic and the base-class introduced in the PFRPG-version of pact magic is called occultist.

The wondrous rider is an interesting, yet short archetype that gains access to lances and a shorter link with his eidolon, but essentially is a cavalry summoner. Cool – but why not wilder a bit in the cavalier’s territory?

Editing and formatting are very good, I didn’t notice any significant glitches. Layout adheres to Abandoned Art’s 2-column standard and the pdf has no bookmarks, nor does it need any at this length. The 3 archetypes herein are interesting, with especially the Occult Binder being pure genius. However, the Malefactor is rather unimaginative in my book and the wondrous rider could have used slightly more complexity. Coupled with the very unfortunate naming ambiguities, these lost opportunities make me settle on a final verdict of 3.5 stars, rounded up to 4 for the purpose of this platform.