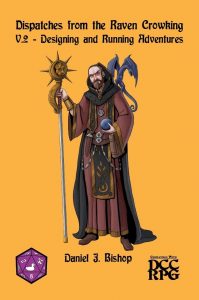 The second booklet of essays and thoughts by the eponymous Raven Crowking (aka Daniel J. Bishop) clocks in at 54 pages, 1 page front cover, 1 page editorial, 1 page ToC, 1 page SRD, 1 page blank, leaving us with 50 pages, though these are made for the a5 (6” by 9”-standard) – you can fit 4 of them on a sheet of paper if you’re like me and tend to print things out.

We begin this pdf with the basics and, even if one is an experienced judge, it may help to recap the steps: 1) Brainstorm. In the beginning, there was the idea. Simple as that. 2) is a golden rule. I mean it. If every designer followed the rule, my job’d be much more pleasant: “Never base the adventure on expectations of what players will do.” Seriously, you can try to rig the game, manipulate structure, etc. – no pre-written module will survive contact with a table of creative minds intact. It’s simple as that. If the module requires a thoroughly railroady array of sequential decisions that could go any way, then we have an issue on our hands. 3) is more complex and less obvious: The goal of players in a module is to exert control over the situation. As simple as that may sound, the ramifications of this truth are much harder to control from the perspective of the author – but at the same time, this provides a means of structuring leverage to employ to keep things on track.

4) is not necessarily correct, but true as a design tenet: No group will find everything. Well, I could rattle off instances where my players did find everything sans me cheating or the like, but they are crazy experienced veterans of the toughest caliber…so yeah – from a designer’s point of view, hiding too much can be bad. 5) is important: Remain true to the setting. The PCs, via smarts and insane luck have managed to accomplish impossible deed xyz? Then they DESERVE the huge reward. Similarly, if they screwed up, they *SHOULD* get hosed. Beyond these, context, an awareness of possible introduction spots and the dynamics of the table are important – and so is the need to make it clear that another GM/judge/referee can run your module – the latter is more critical than you’d think: Designer-blindness and established group-behavior paradigms can easily thwart that one.

The basics out of the way, we come to the advanced components – and it is here that the booklet becomes more interesting, as it halts to analyze the things players take for granted at the table: To wit: E.g. unimpeded communications, risk/reward-levels, etc. – as soon as these basic premises are compromised in one way or another, things get interesting. A number of classic (and new) sample modules are used to illustrate the clever use and modifications of such basic premises…yes, beyond the confines of DCC. What if e.g. seating arrangements suddenly matter?

The advanced adventure craft rules are similarly helpful: There should, for example, be multiple clues to unearth a given piece of information. This may sound obvious, but many, many investigation scenarios still get that aspect horribly wrong. Similarly, offstage material and the like need to be considered alongside with player and character proclivities. If your only hook for gold-greedy murder-hobos, but not the fanatics of god xyz, then your module may need diversification in that regard; even more important would be the fallacy of alignment-associated behavior. I have never made a secret out of my conviction that alignments suck, are anathema to the roleplaying of complex characters and should be purged with fire. More important would be the fact that they often act as a lazy shorthand for designers: Good hook, neutral hook, done. Lame. So yeah. Objectives, allies, bosses and the like are given similar, deep consideration – and so is the sudden and dramatic reveal is a tried and true and much cherished experience that resonates with all of us…but at the same time, it is harder than you’d anticipate to pull off in face of a jaded crew of players. Thus, detailed consideration, including several modules quoted for reference, can guide a Gm to excel at employing this narrative device.

Beyond these, we also take stock on meaningless encounters – when and how to use them, for example. And why they can and should matter. While a given encounter may have no benefit to the story told, we all interact with it nonetheless; as such, the lack of a previously ascribed relevance towards the proceedings of the given plot, ultimately, generates an absence that GM and players alike can fill with speculation, observations, etc. – often enhancing the general immersion of a given setting. I am willing to bet that pretty much every GM worth his or her salt has, at one point, just taken up player-speculation uttered in the aftermath of such an encounter and greatly enhanced the overall flexibility and fungibility of a given module.

Next up would be a component near and dear to my heart: The realm of dreams. With concise observations regarding the nature and significance of dreams, the pdf explores them as a possible setting as well as a narrative device. I am deeply sorry for all groups wherein this amazing means of changing the scenery has not yet been employed – so yeah, two thumbs up here. The next chapter would also be near and dear to my heart: Killing fields. As anyone who’s been following my reviews for a while knows, I am pretty enamored with the tactical new RPGs, but at the same time a fan of rules-light gaming…but regardless of system ultimately employed, my sensibilities very much dictate that I want a concise world…and this ultimately means that none of my games sport CR-appropriate challenges. Various sub-categories exist, but their use in a given game, apart from establishing goals and the like, is not to be underestimated as far as I’m concerned.

This leads into the next aspect, namely fairness and entitlement – and, for the designer, the contemplation of when something’s too much. There ultimately is no easy reply to this complex question, but there are some aspects to consider: Reaping what one has sown and player agenda are important; similarly, “rocks fall, all die” is not fun for anyone, unless it has been telegraphed properly. To give you an example: In one of the classic Frog god Games-modules, my players went past all warning signs (6 sarcophagi) to forcefully dig into a room where they anticipated a mother load of treasure. When said room had a lich and mummy-monks came forth from the niches, they were wipes, with only one PC escaping by the skin of his teeth. None complained about it being unfair…though I have seen on boards and tables players grow a sense of entitlement due to the relatively narrow structure of adventures championed since the 3.X-days. The structure of assumed mid-adventure-progression has done some harm to the sense of danger, but also to the freedom the PCs ultimately should have. A good GM can counteract this, but it is still something to be aware of when designing modules.

Similarly, the pdf does mention horror, but here, I’d like to interject my own observations: Horror follows a different paradigm. Horror assumes a willingness on part of the players and player characters to assume the position of being (relatively) powerless and to be fine with that; similarly, skewed scales of balance are pretty much what the genre thrives on. As such, the biggest obstacles towards good horror-gaming, at least in my opinion, often does not lie within the structure of the modules, but in the mind-set of the players and PCs. You can’t expect a feisty paladin who usually jumps face first with blades drawn into the maw of demons to suddenly quake in his boots at the sight of a rotten carcass. It is a matter of theme and genre and it is my firm conviction that establishing assumptions, but at the table and, in some instances, in modules, can seriously help retaining a cohesive and rewarding mood and playing experience. Tl;dr: Horror’s not for everyone. It’s my favorite mode of gameplay, directly followed by my pretty dark interpretation of fantasy, but some players derive no joy from having their PCs die or become mad in horrible ways. How far is too far? It, ultimately, always depends.

The assumptions and options presented by in-game day-jobs and notes on several ideas to establish a monster-canon can be found here as well – including “The Following Thing”, a stag-headed beast in a black suit, ending the pdf certainly on a high note.

Editing and formatting are top-notch, I noticed no significant hiccups. Layout adheres to the relatively printer-friendly 1-column b/w-standard and the pdf features a couple of nice full-color artworks. The pdf-version comes fully bookmarked for your convenience.

Daniel j. Bishop’s second collection of dispatches is better than the first in a variety of ways; for one, the information contained herein is less colored by preaching to the choir; instead, we have helpful and well-reasoned observations regarding the finer details and components of the art of adventure-design. There are, frankly, plenty of books out there that cover the basics, but this pdf deals not primarily with the basic craftsmanship aspect, but rather the artistry of making modules – and this renders it, at least to my sensibilities, significantly more rewarding. Its respective points are illustrated well with a canon of excellent modules as reference-bibliography, if you will, and while I don’t have all of them, I do have a lot and could ascertain the points being adequately supported by the quoted material.

The accomplishment of this collection of essays lies in the fact that it can be seen as a well-crafted reminder for designers and advanced judges/referees/GMs alike regarding the aspects that can make both an adventure and a whole campaign rise from the mediocrity towards being truly memorable. In short: This does not focus on providing guidelines to making something decent or just “good”, this is focused on helping the reader go the step beyond, reach for the lofty levels of creativity and excellence. As such, it may not be the best book for novice GMs, authors or judges, but for everyone with a sufficient level of experience, this can well be considered to be one of the better GM/author-advice books, regardless of setting employed. Many pieces of advice given most certainly pertain contexts far beyond the scope of DCC. As such, I consider this is well worth getting and it receives a final verdict of 5 stars + seal of approval.

You can get this cool booklet here on OBS!