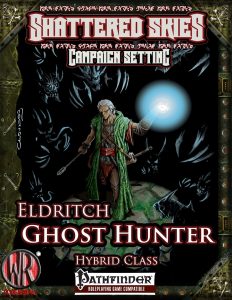 This hybrid class clocks in at 11 pages, 1 page front cover, 1 page editorial, 2 pages of SRD, 1 page back cover, leaving us with 6 pages of content, so let’s take a look!

All right, the eldritch ghost hunter, chassis-wise, receives d8 HD, 6 + Int skills per level, proficiency with simple and martial weapons, as well as hand crossbows, long bow, repeating crossbow, short bow and the deity’s favored weapon. Wait. On a nitpick: It’s “longbow” and “shortbow”, not “long bow” and “short bow”; but more weirdly, those are already included in the martial weapon proficiency, so what happened here? Cut-copy-paste oversight? Or was the martial weapon proficiency supposed to cover only melee weapons? No idea. Eldritch ghost hunters also receive spontaneous spellcasting of up to 6th level, drawn from their own spell-list, which is governed by Wisdom. If rules system internal consistence-aesthetics bother you, usually spontaneous casting is governed by Cha…but personally, I can live with this class using Wisdom. The chassis also nets a 3/4 BAB-progression as well as good Fort- and Will-saves.

The ghost hunter begins play with one domain from his deity’s list, but does not gain bonus spells or bonus spells slots associated, though domain powers are gained – here, a reference to inquisitor, from which this was ccp’d, is still in the file. Speaking of which – the ghost hunter begins with exorcisms 1/day, +1/day at 4th level, +1/day every 3 levels thereafter. A second exorcism and a third are gained at 8th and 19th level, respectively. Sounds awesome, right? Problem: They are basically mostly judgments that have nothing in common with what we’d consider an exorcism by any meaning of the word, even by a stretched one…unless “pummeling into submission” is your definition of an exorcism. That being said, disappointing though this may be, choosing e.g. ghost touch (not properly italicized) and silvering weapons at least make for slightly solid ideas, even though they are not as relevant from a mechanics perspective and make for bad choices in all but specialized campaigns.

The ghost hunter is locked into favored enemy undead via the ghost enemy class feature and begins play with monster lore. 2nd level nets Wis-mod to Initiative as well as at-will detect undead and track. 3rd level renders the character immune to all forms of possession and 8th level upgrades that to extend to spells like trap the soul. (Yep, not italicized.) 3rd level nets a favored terrain, +1 at 8th level and every 5 levels thereafter. 4th level nets basically hunter’s bond…and here, any sense of internal power-balance comes apart. The companion option adds the incorporeal subtype to the animal chosen…and the creature is undead. This is significantly better than the companion sharing. Additionally, the undead type AND the incorporeal subtype add a SIGNIFICANT assortment of immunities to the critter in question. The lack of different scaling for the companion similarly makes that one problematic. Also: I assume that Handle Animal is still used for the undead, even though it’s technically no longer an animal.

5th level provides the option to imbue one of the weapons with the “bane undead weapon special ability” – and this is why rules-language formatting matters. 6th level’s benefit provides help versus a failed save versus frightful moan. that’s very specific. Also: The 12th level upgrade is RAW broken: “At 12th level when the ghost hunter fails a Will save she becomes shaken instead of frightened.” No punctuation and the sentence fails to reference that it pertains to frightful moan….or is that supposed to extend to all Will-saves? Or just those causing fear-based conditions? No idea. 9th level nets evasion (bad Ref-save, remember) and 11th level stalwart. Urgh. So yeah, omni-evasion. 12th level nets greater bane and 14th exploit weakness. 16th nets improved evasion. 17th nets slayer, 18th the ability to craft a special ghost trap that can trap the soul. You guessed it, the formatting’s wrong. However, the ability also does not specify how it is activated. how the trap works. Why it’s Ex. The CL of the spell-duplicating effect…anything. This is the definition of non-operational. The capstone makes them superb hunters of the undead.

Conclusion:
Editing and formatting are not good on either formatting or rules-language level. Beyond a number of editing and formatting glitches, rules-language, when not taken directly from an existing class, don’t work properly. Layout adheres to a nice two-column full-color standard and the pdf provides a pretty amazing piece of interior artwork. The pdf has no bookmarks, but at this length, I can live with that.

Robert Gresham’s eldritch ghost hunter has a cool basic idea – the specialized hunter of the undead is a tried and true trope…so where is the signature weapon? Why are the traps gained at 18th level, when frankly the PCs will have a ton of better solutions…provided they damn traps would actually work. Why don’t exorcisms exorcise anything? Then, we’d have the issues with the OP companion, which makes internal balance sketchy as well. And the fact that the class doesn’t have a single interesting, even halfway operational class feature that is not already done to death by inquis or rangers. I can rattle off multiple archetypes of both classes that frankly do a better job at the undead hunting aspect without feeling so disjointed. This is targeted at fans of ghost busters, obviously – and it utterly fails at properly depicting ghost busting. There’s a Rogue Genius Games-$1-item pdf that does a significantly better job of unlocking this theme for your group.

To cut a long tirade short: On both a flavor and crunch-perspective, this misses the mark and I can’t really picture any game that would really benefit from the inclusion of this class. It is flawed from a rules point of view and fails to cover its intended niche. My final verdict will clock in at 1.5 stars – with the artwork being the only saving grace for me, I can’t round up.