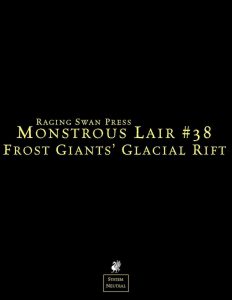 Frost giants are not as primitive as their hill giant brethren, and thus, looking at the area outside the lair, we may see intricately-carved arches, streams of melt-water, and lavish carvings of bearded faces depicting proudly the heroes and jarls of this wicked race. As for what’s currently happening, we have old giants tending herds of furred cattle; we have slaves freezing while under the stern auspices of their giant mistress; we can see youths chip away at ice walls to form spikes and blades of ice. Hammer-throwing at icicles, breaking of polar bears to heel – this feels very distinctly like a frost giant place.

Major lair features include steam pipes melting hinges of gigantic ice doors, bizarre Superman-style museums of things encased in ice, fences of mammoth-tusks and the like – this table is gold. Minor lair features include heads draped, with looks of terror in the icy walls, slaves lying shivering surrounded by sharp icy spikes, sunlight filtering through a mirror-sheen-like lens of ice – this is really cool!

The pdf also sports a table for frost giant appearances, which include heavy furs and plate armor, and a general focus on war attire and furs. Treasures include walrus-tusk horns, crowns topped with fluted spikes, reindeer hides featuring beautiful paintings – rather cool! The table for trash includes shed fur cloaks, squashed helmets, oxtails tied to sticks, used as paintbrushes – rather nice ones that grant an insight into their culture.

Steve Hood has manages to sufficiently differentiate the frost giants from their brethren, and all without tapping too closely into the obvious Norse associations – well done! 5 Stars + seal of approval.

You can get this cool dressing file here on OBS!