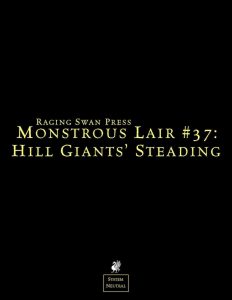 In this installment, we take a look at the steadings of the notoriously hungry and wasteful hill giants, and indeed, the table for outside the lair, with its discarded sheep carcasses and skeletal legs protruding from huge boulders giving good hints for the smart and perceptive player. With long-horned cow skulls and deep footprints we have further hints befitting the less than subtle nature of these giants.

The pdf also presents a table for what’s currently going on, which includes females in the process of horse-butchering, neglected wolf-dogs fighting over scraps, giants hollowing a horn or less than safe attempts to repair the roof. The leitmotifs of waste and subdued laziness are represented well here. Major lair features include neglected palisades that nobody bothered to repair, ramshackle doors on rusty hinges, carts used as dining tables – some cool ideas here that smart players can use in combat or stealth.

Minor lair features include bodies of unruly slaves, haphazardly-stocked piles of logs and rocks as ammunition, skulls used as beer-tankards and the like. If you need individual appearances, you can find podgy and stinking giants, greasy-haired females wearing rotting furs, or giants imitating (badly) a noble’s attire with crudely-woven-together rabbit fur coats. Cool! The treasure to be found include silver mirrors dabbed half in feces, rotted wedding dresses, magically shrinking boar hide belts and the like – nice ones! The final table deals with trash, which can include rusted breastplates used as doorbells, lice-ridden sheepskins, rows of teeth lined up – weird, suitable, like it.

Steve Hood’s take on hill giant dressing manages to capture their folksy laziness, manages to make them frightening and funny, weird and wicked, all without dipping into truly degenerate components reserved for ogres. Great little dressing file, worth 5 stars for the low asking price.

You can get this cool dressing file here on OBS!