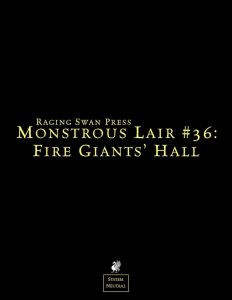 Outside the lair of fire giants, smoke and steam may reduce visibility, and the unwary may have to face superheated landslides; similarly, black basalt devoid of vegetation may be found. You’ll notice here, that not all entries actually have a reference to the actual giants, which is a bit of a pity – while there are cultural artifacts in some entries, they’re only in less than half of them. The table that sports current proceedings suffers from a similar issue: “Lava oozes down a side of a volcano in the distance.” That’s background dressing, not what’s actually going on in the hall. “A fire giant, his back to the party, jogs back to the hall.” We don’t need a dressing entry for that. You could replace “fire giant” with anything, and it’d work. :/ Not a fan of this one.

The major lair features cut copy pasted the first entry of the outside table, and add that it’s hard to breathe. Deep shadows in the high ceilings? Similarly, not a major feature per se; had beams been there? Had there been a kind of pattern? Something like that? Sure. As written? Not impressed. Cracks crisscrossing the floor, though? Nice. Pit traps that drop targets in lava, though? That’s not exactly interesting. Minor lair features include smooth floor that might make you fall, hot, but not dangerously so, walls. Sculpted basalt furniture and more – this table is thankfully somewhat stronger than the previous ones.

Fire giant appearances include put-helmet wearers, flame- and spark-spewing hair, scintillating skin and the like. Some solid entries here. The pdf also sports treasures, which include “a heavy dwarven waraxe leans in a corner of the room.” That’s a toothpick for giants. Or is it giant-sized? Lame. Contrast that with a massive tapestry of strangely beautiful volcanic vistas – that feels like a giant treasure! Polished white dragon scales, carved coffers – there are some nice ones here. As for less valuable objects – smashed remains of axes awaiting being smelted, ragged capes, skeletons hung on (many, I assume) cleverly positioned hooks, draped in a kind of fight scene – we have some strong entries here, and some generic ones. A ragged flag of a rearing griffon? That could kinda lie everywhere.

Robert Manson’s little dressing file on fire giants isn’t bad per se, but it also is a bit more uneven than Steve Hood’s excellent dressings for the other giant types; there is less direct correlation between the dressing entries and the fire giants, and there are more entries for which you simply don’t need a dressing file. Smoke and heat reduce visibility? A banner on the ground? That’s not unique, thetas generic; where is the correlation to the creature? As a whole, I consider this to be one of the weakest Monstrous Lairs-installments out there. My final verdict will clock in at 2.5 stars, rounded up due to the low price point.